Danny Woodhead's 7 yard touchdown catch against the Denver Broncos in the second half of Sunday's game was a breath of fresh air to the San Diego Chargers red zone offense.

Test how precise your football knowledge is by playing the Precision Play of The Week for a chance to win Super Bowl tickets – brought to you by Gillette Fusion ProGlide, precision comfort, even on sensitive skin.

For all of the effort we have gone through to point out Ken Whisenhunt's poor playcalling in the red zone this season, I wanted to highlight one of the better plays that he called on Sunday against the Denver Broncos. Let's revisit Danny Woodhead's touchdown. 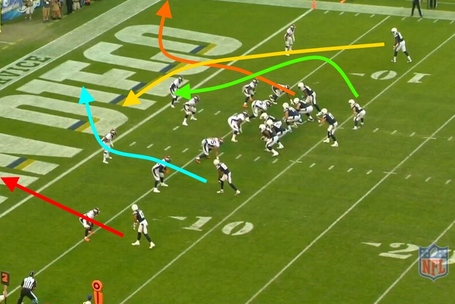 Woodhead is the green arrow on this one. Keenan Allen, the red arrow, is essentially running a fade route on the left side. Vincent Brown, the blue arrow in the slot, it running a slant route that cuts in at the goal line.

The key to this play is the tight ends. Antonio Gates, the orange arrow, runs a corner route to the back of the end zone while Ladarius Green (lined up at WR!) runs a clear-out through the center of the defense.

Note: I probably put Ladarius' arrow about 7 yards further downfield than it should be. He was nowhere near the end zone. Just bear with me. 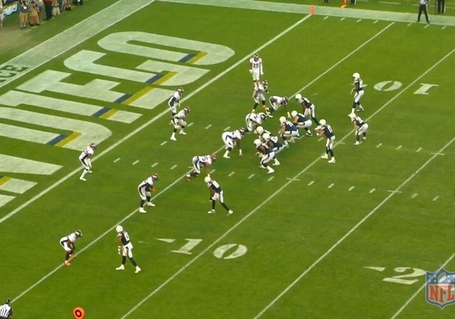 First things first, Philip Rivers has to see what the cornerbacks are playing. Green is motioned down next to Gates and Chris Harris Jr. comes with him. It's man coverage.

Depending on how the safeties play it, either Allen or Brown will have a 1-on-1 matchup, and the same goes for Gates and Green. If Woodhead has more than 1 guy on him, this is an easy pass to Gates. 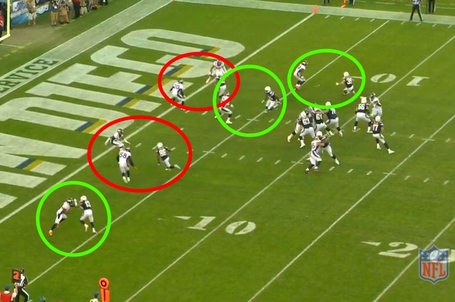 Brown and Gates get double-teamed, so they're no longer options. Allen is already past his guy and would be open in the back corner if Rivers ever bothered to look left. Green looks to be speeding past a linebacker, and Woodhead has another Broncos linebacker on his heels with his cut inside. 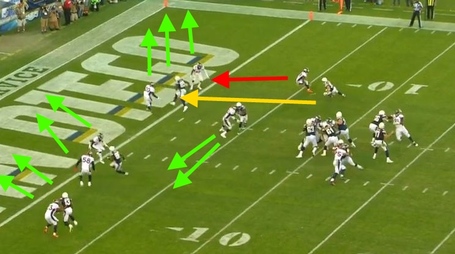 Had Woodhead not beat his man here, the only throw is to Allen (and it's not an easy one). Luckily, the speedy RB out of Chadron State gets the job done and creates an easy touchdown pass for Philip Rivers.