San Diego Chargers rookie head coach Mike McCoy has hurt his team numerous times this season with conservative game management, but refuses to admit when he's wrong. Richard Wade will do that for him.

(Editor's Note: Placing this back on the home page three years later because it still feels relevant.)

At yesterday's press conference, San Diego Chargers head coach Mike McCoy was asked a pretty reasonable question and he gave one of the dumbest answers I've ever heard.

The question: At 4-4, isn't this a time when you have to go all in and take a lot of risks?

Now, I don't love the phrasing of this question, but the general idea behind it is sound and I was eager to hear the head coach's reply.

We are doing whatever we think is best to win the football game.

Mike McCoy utters this sentence the way other poor public speakers say "uh" or "um." If you've listened to any of his previous press conferences you're already as tired of it as I am.

Part of me wants to respect the fact that he wants to trust his process. I'm a big believer in monitoring good processes over good outcomes. The problem here is that Mike McCoy does not have a good process. He has a bad process. In fact, I have a handy matrix for this (compliments of an old Paul DePodesta blog post): 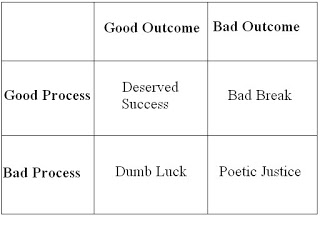 You can find Mike McCoy in the bottom right hand corner: Poetic Justice. That's where bad process meets bad outcome. He deserved to lose, and he did.

If you don't get it on some of those points then what are you going to say then?

This makes it sound like McCoy's decision-making is influenced by potential media criticism. Few things lead to a bad process like worrying about the media response instead of focusing on actually trying to win games. But, in answer to McCoy's question, those of us that are currently complaining about his poor decisions would classify a failed good decision as a "bad break." That happens sometimes. Some people will still berate you, but they'll be ignorant fools like Phil Simms. When those people are attacking you, it means you're doing something right.

Then Peyton Manning goes down and scores on a short field.

I'm sorry, but what game is Mike McCoy even talking about here? The first time he opted to attempt a field goal was on 4th and 1 from the 8 yard line. In what universe is 92 yards a short field? Manning faced a shorter field than that after Nick Novak kicked off following the "successful" field goal attempt.

You can look at it however you want, but we are doing whatever is the best opportunity. Sometimes you go for it. We did talk about going for it on fourth down. That is the last thing we talked about on Saturday night.

That first sentence is really galling because as we've discussed before, and as others have pointed out repeatedly, McCoy's decisions on 4th down are not giving his team the best opportunity to win. He's giving his team the best opportunity to give the appearance of having kept the game closer when they inevitably lose. The Chargers haven't gotten blown out this season. When they lose, they lose by just a score or two. However, the price they've paid for only losing by a little is not having a chance to win.

This is by design. Mike McCoy is clearly more worried about being embarrassed than he is about winning. This is how John Fox has coached his entire career. Just take a look at last year's playoff loss to the Ravens. That's classic John Fox, and Mike McCoy is (for all intents and purposes) the new John Fox. We should have seen this coming, and we should all prepare ourselves for years of this kind of idiotic coaching because, while it doesn't help you win, it does help you not get fired.

But, I also think you have to consider what the score is. Sometimes you have to take points at certain times in the game and is it third and long or fourth and long.

There's a handy little tool at Advanced NFL Stats called the 4th Down Calculator, and it allows you to plug all of those factors in and it spits out a break-even number. Now, that break-even number is based on averages, so it isn't just as simple as accepting it at face value. However, the composition of the Chargers as a team actually biases toward being more aggressive than the calculator suggests.

The Chargers have a top 2 quarterback, a top 5 offense, mediocre special teams and the worst defense in the NFL. That means, when the calculator says you go for it on 4th & 9 from the 50 with 10:24 left in the 1st quarter if you have a 38% chance or better, you should probably go for it.

More than most other teams, it doesn't matter if McCoy's defense is operating on a short field or a long field. They're a unit without a great deal of talent that is deployed in a manner that makes the least of that available talent. You could make an argument that you kick in these situations if you had a top 5 defense and/or a bottom 5 offense. That isn't the Chargers. The Chargers are the exact opposite of that situation. Mike McCoy is coaching like he's in charge of the Kansas City Chiefs.

There were times in the game when we told Philip Rivers he only has two downs, possibly. We do what we think is best at the time. That is going to change week to week.

Part of the reason you find yourself in slightly longer 4th down situations that make it more difficult to elect to go for it is because you're telling your quarterback he has to get it all on 3rd down or he's coming off the field. That makes him force the ball farther downfield on 3rd & 10 instead of taking the easier throw that might only net 8 yards and set up a very makeable 4th down and 2. That's your bad coaching creating the 4th and long situation instead of a 4th and short in the first place. This is incompetence combined with a truly impressive and willful ignorance. That's one thing that isn't going to change week to week.

It's maddening that someone as experienced and as highly compensated as Mike McCoy can't understand such incredibly simple concepts of cause and effect like this.

If Eric Weddle doesn't get that first down early on, what are you saying to me then? You are probably going to kill me for that, right?

Absolutely not. That was a perfect call. Everyone was calling for David strategies all week long. Those are high risk, high reward, and they're what you do when you're the underdog. We all understand that if your risks fail you'll lose, but we also recognize that if you don't take those risks you'll lose anyway. The disconcerting part is that Mike McCoy doesn't seem to realize he'll lose anyway, or he does and he still thinks that's just how you're supposed to coach. I'm not entirely certain which is worse or which is true. Part of me fears that both are the latter.

We are not going to second guess ourselves. We have a great coaching staff, we work extremely hard all week long and the players buy in to the plan. It's just about us being more consistent.

Allow me to translate:

We're convinced we're right despite the fact that every intelligent observer claims we're wrong and that we lose every close game we're involved in. Our egos are fragile and cannot abide serious self reflection, so we'll console ourselves by acknowledging that we try hard and that the people whose careers are in our hands tell us they believe in us. We're not going to fix the things we do wrong because we can't bring ourselves to admit that we've done anything wrong. Get ready for seven more weeks of the same poor decisions and same tired rhetoric defending those decisions. If you close your eyes, you'd swear I was Norv Turner.

Look, even Ron Rivera finally saw the error of his ways and the only coach more conservative than Rivera was John Fox. I'm not holding out much hope that McCoy will have the same revelation that Rivera did, but I am convinced that the Chargers will never win anything of consequence if he doesn't.