Philip Rivers was not great in a game where he needed to be excellent. He completed 19 of his 29 attempts (65.5%) for 241 yards (7.5 YPA) and a TD pass to Danny Woodhead. What surprised me was Rivers not seeing the Broncos using a lot of man-to-man coverage, and changing plays to take advantage of favorable match-ups (or switching out of bad plays). Rivers also reverted back to some bad habits while under pressure in this game, locking in on TE Antonio Gates when other options where available. He was also hurt by a couple of key drops in this game, notably by Gates and WR Vincent Brown.

Now that RB Ryan Mathews has three times as many TDs as fumbles, and has scored on his last 2 goal line carries, can we just go with the idea he's the best option for this team in short yardage and goal line situations? Mathews was terrific with 59 yards on 14 carries (4.2 YPC), and his day could have been better without some awful blocking from the TEs (see below). Mathews even got into the passing game with 1 catch for 2 yards (2 targets), and contrary to perception, has been decent in pass protection.

RB Danny Woodhead added 27 yards rushing on 6 carries, plus another 17 yards on 4 catches on 5 targets, and another TD pass on a Texas route. Woodhead, however, struggled with pass blocking. RB Ronnie Brown added 36 rushing yards on 4 carries, including a nice short yardage run where he went over the top of FB Le'Ron McClain, but had no receptions.

TE Antonio Gates led the Chargers with 4 catches for 62 yards, but those stats are deceiving as he had 8 targets. He was also awful in run blocking, and allowed a free sack to OLB Shaun Phillips. TE John Phillips, in the game for his blocking, was equally awful, as his first quarter holding call wiped out a 39 yard run by Mathews and cost the Chargers at least 3 points. TE Ladarius Green was the best blocking TE (and he wasn't great), and is the best mismatch of the group, yet ended up with only 1 reception for 25 yards (another was wiped out by holding).

Among the WRs, Keenan Allen was not thrown to as often as necessary, with only 41 yards on 4 receptions (5 targets). Yet, he was the only receiver (besides Green) who consistently got separation. On the other side, WR Vincent Brown had 3 catches for 35 yards (4 targets), but the best chance for a big play was a missed TD catch in the second quarter. WR Eddie Royal struggled to get open all game, yet still gained 36 yards on 2 receptions (4 targets).

LT King Dunlap struggled a bit in this game before his neck/head injury, allowing a sack to DE Derek Wolfe in the second quarter on a miscommunication with LG Johnnie Troutman. Troutman had his own struggles against DT Terrance Knighton, allowing a sack and not having a great game at the point of attack in the run. C Nick Hardwick was strong early against NT Kevin Vickerson, who quickly shifted right and created serious problems for RG Jeromey Clary. RT DJ Fluker struggled a bit in pass protection, but largely held his own against both OLBs Von Miller and Shaun Phillips, even after being moved to the left side. Reserve C Rich Orhnberger struggled moving Vickerson from the middle, and Miller got the better of Clary when he was moved back to RT. Filling in at RG was Chad Rinehart, who looked rusty early, but got better as the game went on.

The Chargers played much of the game in a two-man alignment up front, alternating DE Kendall Reyes and DE Corey Liuget with DE Lawrence Guy and DE Sean Lissemore. Frankly, I think the latter group outplayed the former group. Guy and Lissemore, in limited action, did a better job of occupying blockers, and Lissemore in particular had a couple of nice pressures against LG Zane Beadles. Guy also did some nice work, going against former Chargers RG Louis Vasquez. NT Kwame Geathers also played well with some very limited snaps. Otherwise, the only good from the defensive front came with some late pressure by Liuget, who was otherwise a non-factor, and Reyes was completely contained by Vasquez. NT Cam Thomas had a few downs in the game, but did nothing of note with them outside of stopping a running play in the fourth quarter.

Let's start with the somewhat good. OLB Tourek Williams was serviceable in relief of OLB Jarret Johnson, and produced the Chargers' lone takeaway - a strip sack against LT Chris Clark and fumble recovered by ILB Donald Butler, which got the Chargers temporarily off the respirator. OLB Larry English also generated 1 sack, with nice hustle against RT Orlando Franklin. Inside, ILB Donald Butler looked a little rusty, but moved better than any time since the beginning of the season, and did a decent job shooting gaps and generally handling his coverage responsibilities well.

At the other ILB, regrettably, Manti Te'o turned in another poor performance. He was beat by TE Julius Thomas on a play which turned into a long TD catch and run (with assists from CB Derek Cox and FS Eric Weddle), and was targeted underneath repeatedly by Peyton Manning with short throws to RB Knowshon Moreno. He still struggles to square up in space, and still misses big tackles. The only silver lining was that his play recognition showed some improvement over last week - but not nearly good enough to make up for his mistakes.

CBs Shareece Wright and Richard Marshall were absolutely abysmal in coverage against DEN WRs Demariyus Thomas and (to a lesser extent) Eric Decker. Wright allowed all three of Demariyus Thomas' TD catches, and was targeted for over 100 yards of receiving. Marshall wasn't any better, giving up about another 70 yards worth of yardage, primarily by looking in the backfield instead of playing his man. Cox's benching came from his miserable effort to get Julius Thomas out of bounds on his early TD, and got back in the game out of sheer desperation. The best game might have come from CB Johnny Patrick, who allowed just a few short catches to WR Wes Welker.

The Safeties weren't much better. FS Eric Weddle struggled early with tackling, actually stopped on the Julius Thomas TD, and was late on help on a couple of occasions. SS Marcus Gilchrist was miserable with tackling. As a group, the secondary really had a hard time shedding the blocks from DEN receivers, which allowed for huge yards after the catch, Just an all-around miserable effort.

Coverage Teams were sensational in this game, limiting DEN KR Trindon Holliday to only 6 yards on 2 punt returns, and not letting him past the 25 yard line on any of his 5 kickoff returns. Also, a lot of credit goes to P Mike Scifres, who averaged 47.6 yards on his 5 punts, with 4 punts inside the 20 and 3 fair catches, and no touchbacks. In the kicking game, PK Nick Novak was actually decent on kickoffs, drawing 1 touchback and otherwise consistently pinning Holliday deep in the end zone for this returns. Unfortunately, he also had his first non-block FG miss, from 37 yards in the 2nd quarter. He did convert 2 XPs and FGs of 26 and 40 yards.

With the whole "Control the ball on offense, keep Peyton Manning off the field, score TDs instead of FGs" context, let's dispense with this game management stuff quickly. Going for the fake punt early - Good. Not attempting a 4th and 1 conversion at the DEN 8 in the 2nd quarter - Bad. Waiting until after the 2 minute warning to start using timeouts (letting 30+ seconds needlessly drain off the clock), Awful. And while I'll concede it's not cut-and-dry, I would have gone for 2 when Mathews' TD brought the Chargers within 9 points (28-19). I'd rather know I need two scores with 10:44 remaining than with less than 5 minutes remaining.

One last thing in regards to McCoy's Monday Afternoon Defensiveness. We're not criticizing the results, so much as we're criticizing the process which led to the result. For example, the 4th and 1 punt from the SD 29 in the 3rd quarter was a questionable process (trailing by 22 at the time, and have allowed TDs on 3 straight possessions) with a great result (the Williams strip sack fumble which led to a TD).

On offense, I'm wondering why Ken Whisenhunt has gone all play-action happy the last 2 weeks. The problem with this approach is that it forces Rivers to hold the ball longer, requires deeper drops, longer developing routes, and an offensive line performing at a level higher than they've been asked all season. The whole idea behind this offense in the last 2 weeks seems a lot more vertically oriented than the first 7 games of the season - and there seems to be an emphasis on getting Vincent Brown involved. The problem is that it seems to be stalling out the offense.

On defense, my personal choice against Peyton Manning would have been to use a 2 or 3 man rush, then play press man underneath a medium zone, with delay blitzing on 3rd and Long. I would have wanted to disrupt the timing on Manning's short pass game, force him to hold the ball, move his feet. When John Pagano did this early, and in the 3rd quarter, it was effective. By and large, unfortunately, this was not his approach. I'm simply confused as to why you wouldn't try to disrupt the timing of an offense where a significant majority of the passes are within 10 yards of the line of scrimmage, never mind going away from what's working. 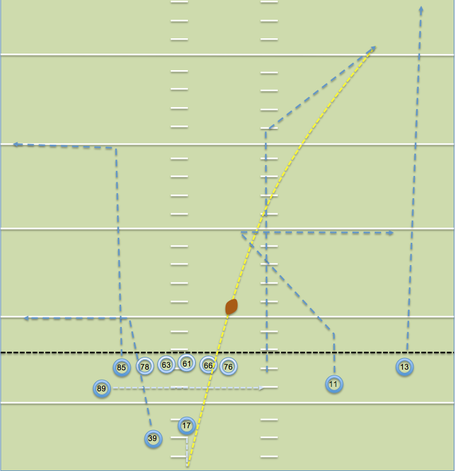 I'd like to thank the Jacksonville Jaguars and Tampa Bay Buccaneers for beating two AFC competitors for the #6 playoff seed (Titans and Dolphins), and thereby buying the Chargers an extra week. Hopefully, the Chargers can finish wrecking the playoff hopes of the Miami Dolphins, and maybe keep their chances for the postseason off the respirator.