What to expect from Washington's Offense

Don't let their 2-5 record fool you, Robert Griffin III and the rest of the Redskins offense should prove to be the toughest test yet for the Chargers Defense. Kyle Posey breaks down just what to expect from the potent offense.

Share All sharing options for: What to expect from Washington's Offense

On the whole, this is one of the better offenses in the league, and as Robert Griffin III gets healthier, they will only become more dangerous. I've said that yards per play is the best way to measure how good an offense is, and the 'Skins are currently 9th in the NFL. When they get in the red zone, they also score touchdowns. They're currently 8th in the NFL in that department.

To date, this should be the toughest offense San Diego has faced, proving a true test for John Pagano's defense.

Like most good offensive teams, Washington has their staple of run plays. Most notably, they are successful out of the "Pistol" formation. This makes the defense honor both sides of the formation, another subtle advantage for the offense.

Washington is most successful running outside of the tackles. 40% of their designed runs have come off tackle, that's a staggering amount. Getting Jarret Johnson back will be huge, as he is one of the best edge setters in the NFL. But, with the pistol formation, Washington can go in any direction, so this will be an important game for Larry English not to get "reached," or allow the OL to get outside leverage on him.

This first play is a little pitch play, an extension of the outside zone, out of an offset pistol formation. It illustrates everything Washington does well. 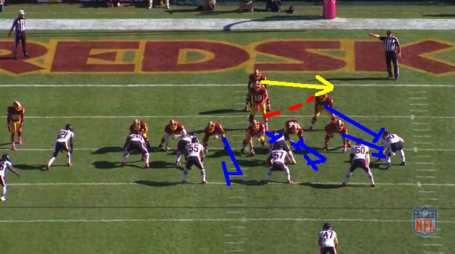 The left tackle, Trent Williams, is playing as well as anyone in the league. He struggled a little last week, but that was against Von Miller, which can easily be forgiven. Here, he did a great job of getting to the second level and walling off the strong side linebacker. The rest of the OL did a great job as well at taking the right angles and executing their blocks. 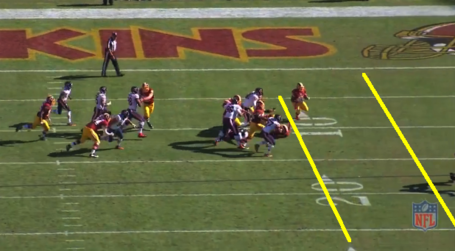 Morris might have the best vision in football. Here, he patiently lets all his blocks develop, and gains 18 yards.

These next 3 plays are examples of how well they execute the outside zone. They also show the patience, vision, and burst both running backs possess.

This will be Manti Te'o's biggest test, without question. If he allows Williams to dominate him, Washington will run for 150 yards. Te'o will need to shed blocks and finish plays.

What has given Washington's run game problems is interior pressure. That should be a point of emphasis for the Chargers. They'll need a big game from the defensive line.

It's no surprise as Griffin III has gotten more healthy, Washington has run more read option plays. Over the past 2 games, they've run the read option 13 times. RG III has only given it to the back 3 times in those 13 plays.

I'd play it like Denver did, aggressively. They brought pressure up the middle and blew up the option. If you play the read option like the Bears did, and are indecisive, they will kill you all day. Griffin ran for 84 yards against the Bears.

There is a little twist that Washington does. While there is still a "read" there is also a "lead." I'll explain. 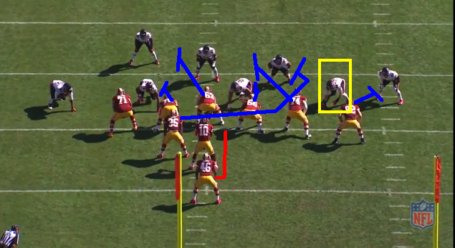 Here, the OL all step left, away from where the play is going. This serves as a good counter as it gets the entire defense to take a false step. The fullback, serves as the "lead" here. The highlighted yellow square is the "read." If the read crashes down hard, then RG III keeps the ball. If he attacks RG III, then he gives the ball to Morris. 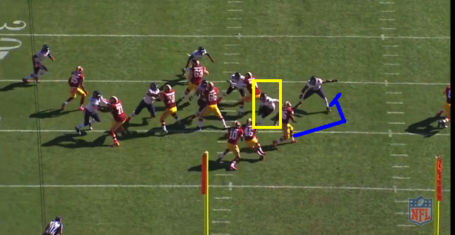 Green grass is the last thing you want to give RG III, especially now that he's moving much better. This went for a 23 yard gain.

This time, to the left. The Bears were wavering as Washington ran the option more and more. The defensive end is indecisive. 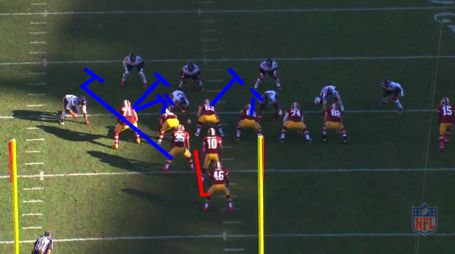 Again, the end man on the line of scrimmage is the "read," so he is left unblocked. 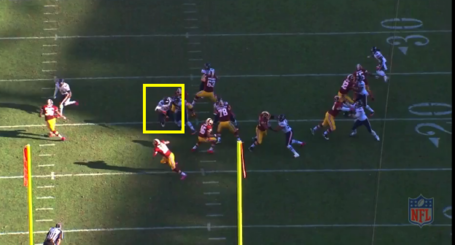 The defensive end stepped laterally, playing passive aggressive. Another easy read for RG III, and a run for 10 yards.

I'm not going to tell you that these are the only two run plays that Washington runs. I'm also not going to try and convince you that there are a handful of other running plays. This is what they do, outside zone, and the read option. It's been working, so there's no need for much else.

Morris and Helu are both exceptional at getting yards after contact and making people miss. 56% of their yards have come after contact. It'll be important for the linebackers to not only fill the right gaps, but finish the play. Tackling has been a big issue for the Chargers defensive players this year.

There are certainly ways to stop the Washington offense, and that's by being aggressive. Which is what the Broncos did much differently than the Bears.

#Broncos played a ton of man coverage concepts vs. #Redskins, which suggests they don't believe RG3 is a major running threat right now.

It'll be interesting to see how defensive coordinator John Pagano plays this. Washington ran for 209 yards against a zone heavy Bears defense. The Broncos were much more aggressive, and if you take away that long 27 yard run by Morris, they held Washington to 3.1 yards a carry. Will they keep a spy on Griffin? That seemed to work for the Broncos.

Washington does a good job in their passing offense by using play-action and creating easy throwing lanes and reads for Griffin. They run play-action 31% of the time, which is the 2nd highest rate in the NFL. This GIF is a perfect example of what effect the read-option has in the passing game.

This completion went to tight end Jordan Reed. It will be even more maddening for fans knowing that Washington actually uses their athletic tight end. Reed is a mismatch, much like Ladarius Green is for the Chargers. Unlike Green, Reed is more of a focal point in the offense. In the last 2 weeks, he's been targeted a whopping 23 times, good for 17 receptions and 224 yards.

Washington will move Reed all over, and run the entire route tree with Reed. Whether it's a 10 yard out route, slant, or even a screen, they look to get him the ball. Unlike the Chargers in the red zone, they use Reed a ton down there. The answer is obvious on who should guard him: Eric Weddle. Weddle is the only person on the roster I think capable of guarding him.

Here is another staple, the bootleg off of play-action. 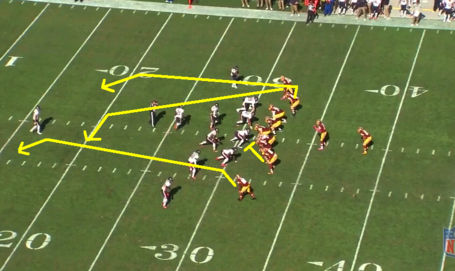 After they hit you with outside zone after outside zone, Washington catches you being over aggressive, and will make you pay. 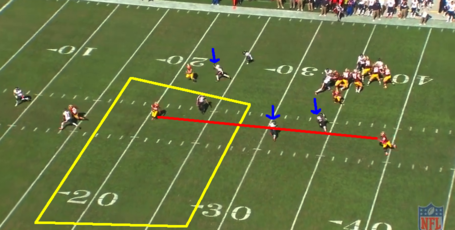 Each linebacker (blue arrows) over-flowed and were out of position. Creating another wide open throwing lane for Griffin.

Pierre Garcon is Griffin's actual go-to target. Garcon mainly lines up on the left side, and the majority of his targets come within 10 yards of the line of scrimmage (66%.) They like to hit Garcon on a slant or curl and give him the opportunity to run after the catch, where he is very dangerous and has the speed to break through every time.

Washington will also spread it out. When you do that, you define most of the passing lanes for your quarterback, making it an easier throw and read. 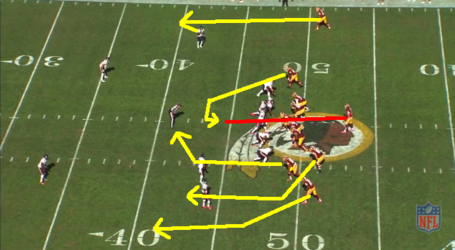 They like to attack the middle of the field at different levels. Here, Garcon is in the slot to the top of the screen. Because the defense gets depth, he has a lot of room to run after the catch. 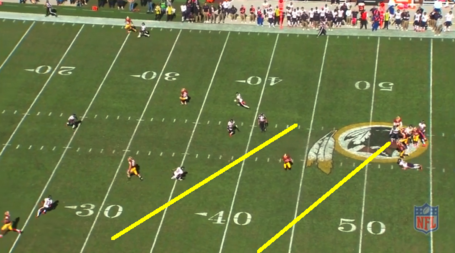 This play was good for a gain of 17. In every game this year, Garcon has had a gain of at least 17. Again, if they let him catch the short passes, that's fine, it's finishing the play and making the tackle that will be the difference for the Chargers defense.

Denver had the best recipe for success. They usually had a spy who was on Griffin the entire time, and played man coverage. They also attacked Griffin, they blitzed him up the middle and forced him to make throws. There were times where he missed receivers as well as threw it up for grabs.

Then again, the Chargers don't have a Von Miller nor do they have a secondary with the caliber of players like the Broncos, save Weddle. We mentioned in our weekly podcast that the Chargers will have an opportunity to make plays on defense, and to create a turnover. Will they take advantage is the question?