Danny Woodhead has been an integral part of the Chargers offense through 4 games. Jason Peters looks at the variety of ways they get him involved in the passing game.

Share All sharing options for: How the San Diego Chargers utilize Danny Woodhead

Danny Woodhead has been earning every penny of his two-year, $3.5 million contract this season. He has appeared in 41% of the Chargers offensive snaps, and only Ryan Mathews has had more rushing attempts and pass targets than Woodhead. Strictly in the passing game, Woodhead has the second most targets with 27, just behind Antonio Gates.

How are the Chargers getting him so involved in the passing game? Let's look at a few plays showing some of the key ways.

Split Him Out Wide

Lining the tailback out wide has the drawback of telegraphing to the defense that you are passing the ball. On the plus side, it forces a linebacker or safety out of position to cover Woodhead. Also, the motion give Rivers additional information about the defensive coverage, and allows him to adjust the play as necessary.

In the play below, Woodhead is sent to line up to the far right against the Titans. Linebacker Zach Brown follows him and lines up over him. 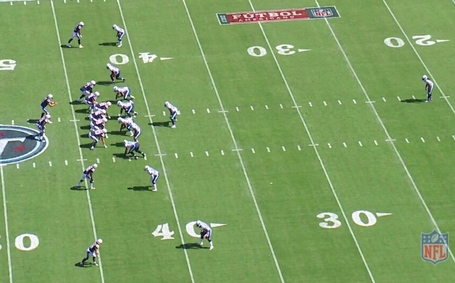 This play is a screen to Woodhead. At the snap, Rivers throws to Woodhead, and all receivers and linemen rush to take the man to their right. 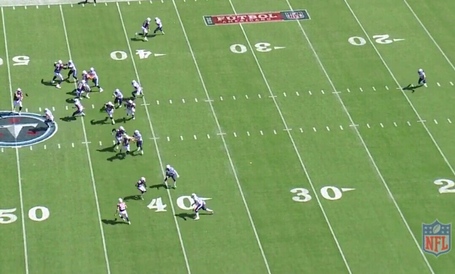 The screen is set up perfectly. The only defender unblocked is DT Antonio Johnson. If Woodhead managed to avoid Johnson (something he usually is able to do), he has nothing but open field en route to a touchdown. 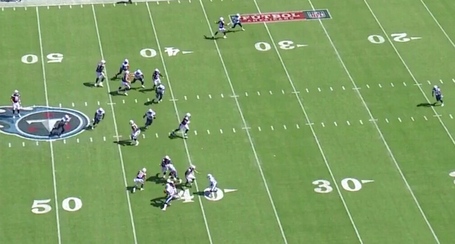 Johnson manages to make the tackle in this instance to limit Woodhead to a 6 yard gain and a first down, but expect to see this play again in the future.

Clear the Middle With Deep Routes

Sometimes the best way to get consistent short gains is to combine long routes with short ones. The Chargers used this with extreme effectiveness against the Cowboys, especially with Antonio Gates. The play below has 4 receivers running routes between 8-12 yards down the field, while Woodhead slips through the line of scrimmage and settles 3-4 yards past the line. 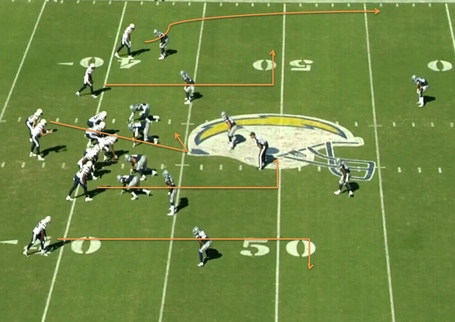 The linebackers immediately react to the deep routes, leaving Woodhead all alone, as can be seen below. He makes the catch and goes for 7 total yards to set up 2nd and short. 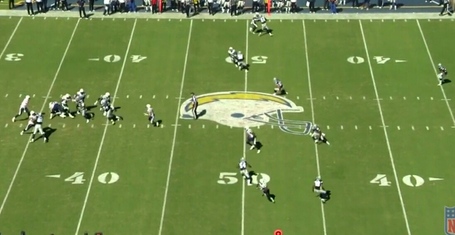 It is only fair to note that this play was just before the Rivers pick-six. The game was past the two minute warning in the first half, and that likely contributed to a softer than normal defense, especially in the short-middle of the field. However, this play was available through much of the game, as Antonio Gates showed time and time again.

Antonio Gates is a threat linebackers and safeties have to take seriously. The Chargers are using him to clear out an area of the field for Woodhead to set up shop and go to work.

The flat route is a old standard for running backs, but the Chargers have been agressive, and if a linebacker plays tighter on Woodhead or Mathews, they turn upfield on the sideline and go long. Woodhead scored his second touchdown against the Cowboys this way. Mathews scored a touchdown against the Texans on the Chargers first offensive play of the season the same method. 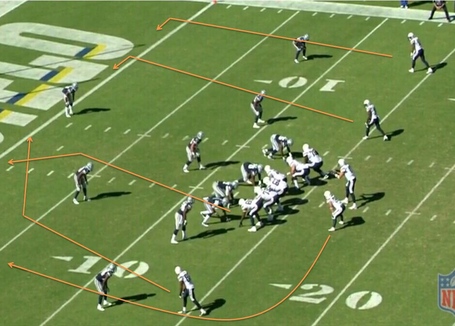 The play above is interesting, in that Vincent Brown and Antonio Gates have their routes cross near the goal line. This sets up a pick on the defenders where they have trouble staying with their proper man. It is not a coincidence that this moment of confusion is when Rivers launches the ball to Woodhead, who is now guaranteed a one-on-one versus an overmatched Bruce Carter, as seen below. 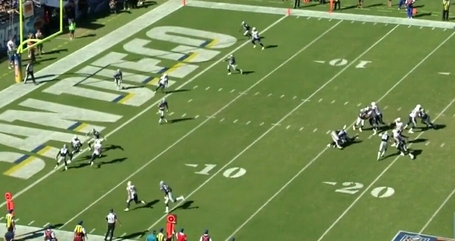 The defenders still haven't gotten their act together on Brown and Gates as Woodhead is catching the pass wide open in the end zone.

The basic premise to getting Woodhead involved in the passing game is simple: combine route concepts with mismatches against linebackers in coverage. If the defense tries to move up to stop Woodhead, things suddenly open up for the receivers down the field. The Chargers have the weapons to exploit these mismatches, and it starts with the excellent offensive game plans seen so far by Whisenhunt.