Why hasn't Vincent Brown lived up to early expectations?

Taking a look at where Vincent Brown has been asked to line up, and how it's taken the new coaching staff a few weeks to figure out how to best utilize the wide receiver. Might his breakout season be this year?

Share All sharing options for: Why hasn't Vincent Brown lived up to early expectations?

Having played the position at a higher level, wide receiver is without question one of my favorite positions to watch, hence, my homerism (rightfully so) towards rookie Keenan Allen. I'm not going to go all "I played football so I know more than you" because that's erroneous most of the time and widely overblown. However, playing the position has taught me the nuances and intricacies of the position. It's the small things that really have stood out, especially when watching Vincent Brown play. I want to explain why we haven't seen the Brown of 2011 quite yet.

Make no mistake about it, Brown is a hell of a football player. I didn't know much about him coming out of college, but you can see he has all of the tools to be a very good player in this league. He was actually a perfect fit for Norv's offense, which I'll get into later, and early on this season he's been asked to be a completely different player. What he's been asked to do, isn't a strength of his.

Injuries suck, and they happen to every team. Unfortunately, it seems like the injury bug bites the Chargers more than any other team. Season ending injuries to Malcom Floyd and Danario Alexander thrusted Vincent Brown into playing the "Split End" role for San Diego this season. I've heard announcers over and over explain that both positions are interchangeable and it drives me absolutely nuts, because it couldn't be further from the truth.

As the split end, you are lined up predominantly on the line of scrimmage. Generally the split end is lined up opposite of the tight end, and is facing a cornerback that is playing press coverage against him. Three important factors to look for when scouting a split end:

Now, what has happened this year with Brown (when he's been playing split end) is that corners don't respect or fear his vertical speed, at all. So, when he's running these short crossing routes or basically any in breaking route under 10 yards, the cornerback is sitting on his routes. Thus why he isn't getting any separation, and why he's struggled through the first three weeks of the season, and even preseason. It also allows him to get jammed easily, and at his size (5'11", 185ish lbs) that was becoming a problem. That changed Sunday against Dallas.

What changed Sunday? Apparently, the coaches noticed the same thing. Against the Cowboys, Brown played mostly the "Flanker" position, while Allen was lined up at split end.

Again, these are two very different positions, even though it might not seem so. At flanker, you're lined up predominately to the tight end ("strong") side and off the line of scrimmage. That keeps the corner from getting his hands on you, which helps make up for Brown's lack of elite speed. The two yards between you and the CB make a big difference. This is usually where smaller receivers who are good route runners line up. Does that sound like Vincent Brown? It should.

Vincent is, in fact, an excellent route runner. When you watch him run a 10 yard out, a deep post, or a dig route, they all look the exact same. He does a great job at selling his breaks, whether he's going inside or outside. Sunday, he turned Cowboys CB Brandon Carr around a few times on an out route. He's very good along the sideline, and that's where he needs to stay.

The best example I could think of is, if you look at the Steelers a few years back, Mike Wallace and Hines Ward. Ward, the better route runner but nowhere near a speedster, was the flanker and was very good at it. Wallace, a guy with top flight speed, was the split end who could beat press coverage like it was nothing. Brown is clearly more in mold of Ward in this example.

The reason Allen makes sense as a split end is because he's big and quick, with a great release off of the line of scrimmage, as you saw Sunday when he repeatedly abused Mo Claiborne. Here's a good example of Allen beating press coverage.

I know sometimes it's hard to grasp something without seeing visual evidence, so now I want to show you exactly what I've been talking about. I'll start with Brown lined up as a split end, where he can't utilize his greatest strength: route running.

The Titans game is a great example. Tennessee played a lot of press coverage against Brown, and he simply couldn't beat it. Brown only had 3 targets that game, because he couldn't get separation.

Against the Eagles, Brown was asked to win on a couple different vertical routes and, again, failed to do so. He was also asked to run some short crossing patterns, and struggled with that as well. Brown is such a long strider and it takes him awhile to get to top end speed, that when he's asked to cross the middle, he's an easy cover. Rivers was throwing the ball before he was out of his breaks, and Vincent benefited from that more than being open.

For the camp that thinks he's best suited as a slot receiver, when they threw a screen to him Sunday, you saw why that's not the case. It took about 5 days for Brown to get his head around and turn up field. For slot receivers, you want a player who is extremely quick with a good burst and the ability to make the defender miss. That's just not Brown's game.

Here's a pretty telling example of that. 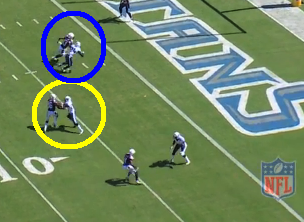 Brown is the yellow circle, Allen the blue. Brown just doesn't have the initial quickness to beat press coverage, yet he was asked to do so early on. The defender easily got his hands on him, and that threw off his entire route. Meanwhile, Allen gave a quick inside jab to his defender, and exploded off the line creating separation with ease.

Brown runs one of the more prettier "out and up" patterns I've seen. That's when he's at his best. He's not going to beat you by simply outrunning you, he will beat you with deception. He ran one against the Texans and his feet got tangled with the CB, or else it's a touchdown. He ran one against the Cowboys on the first play of the game (both as a flanker) and the ball was under thrown, or else it's a touchdown.

Here's an out route ran at about 15 yards that really defines Brown as a receiver. 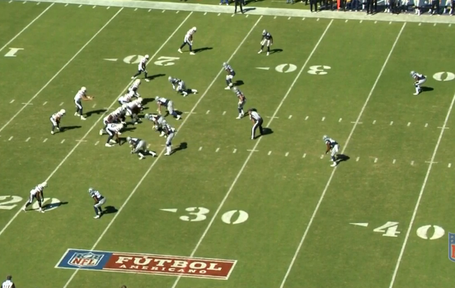 Brown is lined up to the bottom of the screen as a flanker here. Notice the 2-3 yard cushion between him and the CB. 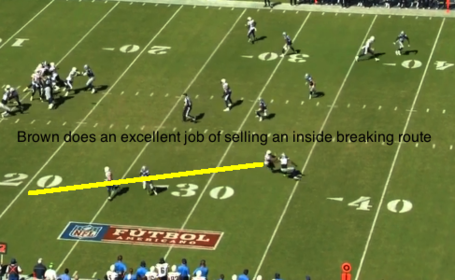 The yellow line is where he started, at the bottom of the numbers. Brown took a hard inside release, gaining about 4 yards of ground inside. The cornerback's thinking a dig or a post is coming. 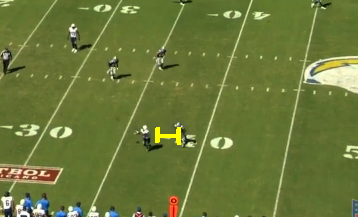 Brown did a great job of getting in and out of his break with no wasted movement, and easily created space. In the NFL, that's about as wide open as it gets when you're 1-on-1. This is what Brown does, making every route look the exact same.

Let's look at the difference when Brown is asked to run a curl route against press coverage when he's the split end, and vice versa as a flanker.

Against the Titans, they were sitting on everything. 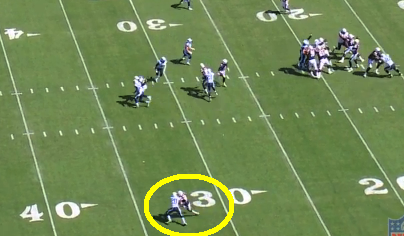 This is 10 yards down the field, and the corner never back pedaled. That's pretty gutsy when you have deep responsibility, but the corner doesn't respect Brown's speed, and is in his hip pocket and able to force the throw to go elsewhere.

That was Brown against press, now let's see how he fares when he has some space to work with. 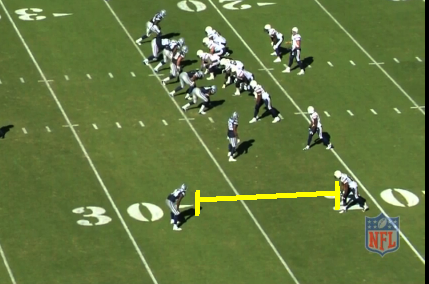 Here Brown is in no danger of being re-routed by press man, given the 5-6 yard cushion. This will allow him to sell the vertical route.

Those long strides of Brown really paid off here. He was able to sell the deep route to the corner and, because he gets in and out of his breaks so effortlessly, it's an easy pitch and catch.

How should Brown be used?

At this rate, I wouldn't run a route with Brown under 10 yards. Occasional crossing routes, but he's best suited to work the sidelines. He keeps the defender honest by making every route look the same. With his ability to run double moves, Brown can potentially be the deep threat receiver the Chargers need with Floyd missing.

Brown can be a special player. He is a special player. He's on the right track, he just needs to be utilized to his strengths. It seems like the coaching staff is starting to do that, and it'll be something I'll be looking at against the Raiders next Sunday, who coincidentally was Brown's best game of his career back in week 10 of 2011.