Chargers Playbook: Philip Rivers and Keenan Allen, a match made in heaven

Philip Rivers and Keenan Allen are developing chemistry and trust in a hurry, and that was on no greater display than on Allen's 22-yard touchdown catch in the second quarter of Monday night's victory over the Indianapolis Colts.

Share All sharing options for: Chargers Playbook: Philip Rivers and Keenan Allen, a match made in heaven

There were a lot of things to like on Monday. The Chargers defense played better than they have all season and shut down one of the better offenses in the league while Philip Rivers and company strung together 10-plus play scoring drives like it was no big deal. It certainly was a total team effort, however one thing stuck out in particular.

The trust and chemistry between Keenan Allen and Philip Rivers really is something to behold, especially since they've only been around each other for a handful of games. Sometimes it can take years for something like this to develop between a wide receiver and quarterback, but Allen and Rivers seem to have clicked from the get-go. They very well may be on their way to developing into one of the more feared tandems in the entire league - and it was hard not to see a little flash of that potential in this week's featured play. Let's get into it.

Indianapolis came out moving the ball well against the Chargers on their first drive, but ended up settling for a field goal. For the next two drives, John Pagano and the defense put the brakes on the high-powerful Andrew Luck offense. Unfortunately, the Chargers offense simultaneously stumbled out of the gates by punting on their first two drives. On their third drive, however, the tides suddenly changed when Rivers led an impressive 12-play, 74-yard drive that was capped off by a beautiful 22-yard touchdown pass to Allen. 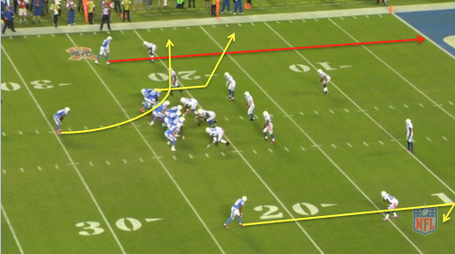 The one takeaway here is that Allen wasn't supposed to get the ball against this particular coverage. The defense was in a Cover-2 look (two-deep zone with the safeties splitting the field in half), meaning that a quarterback should in theory always look to work the ball underneath instead of forcing a ball deep that will most likely be easy pickings for the safety on that side. So Allen's route should have worked to clear out that safety, allowing Rivers to find Gates behind the linebackers on a corner route for an easy pitch and catch. Now, that's all well and fine in theory, but in practice, players sometimes make errors that can create an opening that normally wouldn't be there otherwise.

As you can see, the safety started to jump Gates' route before thinking better of it and trying to recover back to Allen. Those two steps out of position, however, were two too many for a passer as surgical as Rivers. He recognizes the mistake immediately and decides to put the ball in a place where only his receiver can reach it. It speaks to the level of trust that Rivers has in his rookie wide receiver that he didn't even hesitate here. He was confident that Allen would recognize what he was trying to do and make the appropriate adjustment on the ball. Also, credit Allen for not giving up on the route, which would be an easy thing to do when running a Go against a Cover-2. Those are the types of things that will keep a quarterback coming your way over and over again.

Make sure to keep a close eye on this tandem this week against a Jacksonville secondary that is ranked 22nd in the NFL, per Pro Football Focus. There should be opportunities aplenty for Rivers and Allen to continue to build on their budding relationship.