Tom Telesco's first draft as General Manager of the San Diego Chargers looks like it will be a very successful one, partly due to his ability to find a #1 WR outside of the first round that is ready to contribute now.

Share All sharing options for: The San Diego Chargers have finally found their Vincent Jackson replacement

Back in April, I wrote about how many starters the Chargers drafted. I mentioned Keenan Allen as one, and if you read the comments, got killed for it.

Allen is the future of the receiving corps and will be an immediate threat in whatever passing game offensive coordinator Ken Wisenhunt installs because of his ability to work all over the field and not be limited in his route tree. There's a lot to like about Allen's game, another true football player that has no problem making catches in traffic or going over the middle, Allen fights for extra yards and doesn't shy away from contact. Every route Allen runs looks the same, which makes him such a difficult cover for corners. He's a great fit and should be able to step in and contribute immediately. He also brings toughness, and a willingness to block. Allen has the everything you need to be a starter in the NFL.

I think it's way too early to count on Allen, most rookies take 2-3 years to develop, look at Floyd."

"Allen doesn't have top end speed or athleticism, it's clear that there are limits to what he can do physically in terms of explosiveness."

Even the beloved TLORB didn't believe.

"If we're at a point when we're relying on Allen during the season, then we will be travelling pretty badly"

I could go on and on, but that' would be pointless.

I even explained that the thought process was with the unfortunate assumption that either Danario Alexander or Malcom Floyd would become hurt. Allen is much different than a typical young receiver, and that's shown over the past couple weeks.

The one thing I don't understand in sports is the historical approach to everything. If you see a special talent, why can't we just acknowledge it for being great? Why do we have to wait? We see it in baseball with Yasiel Puig, or in basketball with Kyrie Irving. We know these guys are good, because they have a special trait. They do something that no other young player does.

Many people have told me that rookies take awhile to come along, and we should ease them in. It's not fair to categorize Allen in the same group, because he has traits of an eight-year veteran. Watch this route, this is against a top 10 corner back in the league, Vontae Davis, and he turns him around and creates separation in less than 5 yards. Rookies don't run routes like this. I would say about 85% of wide receivers struggle to get off the line of scrimmage, and that's why they struggle early on. This gives you a good idea of how he wins at the line of scrimmage.

It's time to embrace it, the Chargers haven't had a young receiver like this in a long time. It has been fun to watch. It's no coincidence that Allen is the first Charger rookie to have back-to-back 100-yard receiving games since 1960.

However, it's not just the 100-yard games to make me believe that the Chargers have finally found a replacement for Vincent Jackson. When you think of a #1 receiver, you want a guy that's dependable. A guy that you know is going to get open, and catch contested balls in traffic, whenever you need a pivotal play. Currently, Allen is third in the NFL in "catch percentage", which is the percentage of times a receiver is thrown at and a catch is made. He's caught 76.7% of passes thrown his direction. That's impressive. That's dependable. That's what this offense needs to be successful.

Who were other names in the top 10? Antonio Brown, Demaryius Thomas, Randall Cobb, Wes Welker, Julio Jones, Brandon Marshall, Marques Colston, and Andre Johnson. Guess what all these receivers are? They're the go-to receiver for their quarterbacks.

Keenan Allen can make plays down the field but his ability to finish in traffic is his greatest asset.

The next requirement to be a #1 WR is you have to be able to move around and you have to be able to get open. Last week, I wrote about missed opportunities when Allen was open and Philip Rivers didn't throw him the ball. There was more of that this week. Allen finished the game with 12 targets, 4 more than anyone else, but he could've had more. He was open all game. I'll go over some examples. 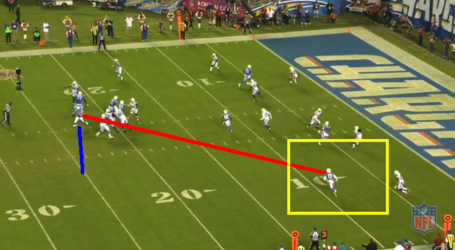 Allen runs a 5 yard in route, and is open with plenty of room to work with. He could possibly even score with all the defenders having their back turned. Instead, Rivers elects to scramble, and throws it out of bounds. This lead to a field goal, instead of the easy first down, possible touchdown.

This next play result was an 8 yard gain. Rivers was waiting on Antonio Gates to come open on his patent route where he stutters over the middle, and keeps running.

Allen is open right now and is at the depth where Gates eventually ends up. As we saw in the game, he has the ability to make oncoming defenders miss. Rivers ends up holding onto the ball, waiting for Gates to come open on this play in the third quarter.

This next one hurt. This one had touchdown written all over it before the snap. Allen was in the slot out of a 3x1 formation being guarded by a linebacker. Rivers recognizes it, but vastly under throws him. 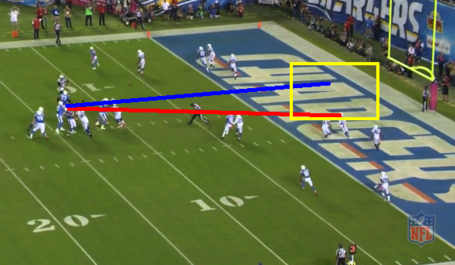 He threw it to the red line, where he should've thrown it to the blue and allowed Allen to run underneath it.

This next play was weird. Rivers actually looks at Allen, even as he's breaking out of his route, and open. Yet, he still comes back to Gates. 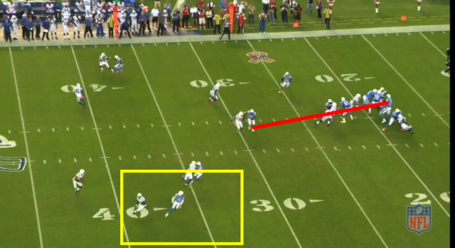 Allen runs a good route, turning the corner Davis around on what would've been a first down. Instead, incomplete pass.

This next one isn't Rivers fault, Gates drops it, which seems like it's becoming a weekly theme. 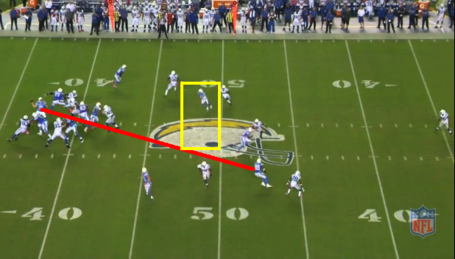 This seems like an indictment on Rivers' play. It's not, at all. Did he miss some open receivers? Sure. Most quarterbacks do. This is more about highlighting Allen and how open he was during this game, and the last 2 games.

It's time Allen featured as a #1

For what it's worth, Allen is listed as the #1 WR on the teams website. I think we're slowly starting to see a rapport build between him and Rivers. I hope the offense continues to target him over 10 times a game, like a true #1. He's proven he is reliable, he's proven he can get open. Now it's just about giving him the opportunity. I'd like to see more back shoulder fades, putting even more pressure on the defensive back, much like his 31 yard catch down the sideline against the Cowboys.

Him being a rookie shouldn't hold back the fact that he's the best receiver on the team, and it's time he's featured as such.