Blitz Happy: A quick look at the "Lucky Clover" formation's effect on the Colts.

San Diego Chargers defensive coordinator John Pagano unleashed a load of blitzes on Colts quarterback Andrew Luck on Monday Night Football. See how he managed to get pressure despite not having any edge rushers.

Share All sharing options for: Blitz Happy: A quick look at the "Lucky Clover" formation's effect on the Colts.

There were so many questions on the defense for Monday Night that no one assumed the Chargers would contain the Colts any more than a cloudy day would cancel their practice. 9 points, though? That was amazing. Yes, the Colts dropped a few passes, but two of them wouldn't have mattered, and the Chargers also had missed opportunities that could have resulted in more points and a bigger lead and an essay's worth of "what ifs". However, lets stay on topic and look at the blitzes that kept the Colts from converting first downs in the first half of the game.

First of all, I have no idea what the formation is officially called. It looked like a dime or quarter defense, but there were two linemen (technically eliminating the quarter) and two linebackers (for 4 total 'linemen' eliminating the dime). The formation used 2 linemen in Corey Liuget and Kendall Reyes, 2 linebackers in Reggie Walker and Larry English, four safeties in Eric Weddle, Darrell Stuckey, Jahleel Addae, and Marcus Gilchrist, and 3 cornerbacks in Johnny Patrick, Shareece Wright, and Derek Cox. Four "big" guys and seven defensive backs. A four-leaf clover is considered lucky, as is the number seven. That's where I got the corny name. You can laugh at it and then give your recommendations in the comments.

Here you see the formation pre-snap. The Colts are in a Shotgun trips of some sort. Kendall Reyes and Corey Liuget are standing up as a 5 and 0 technique, and both Larry English and Reggie Walker (lower yellow) are lined up as edge rushers. Marcus Gilchrist (upper yellow) is between the linemen, and Weddle (center yellow) shows coverage on Trent Richardson. Johnny Patrick (left red) is in the slot, and Jahleel Addae is the deep safety. Darrel Stuckey (right red) is the low safety and the corners Derek Cox and Shareece Wright are in off coverage. Here it is in Coaches cam: 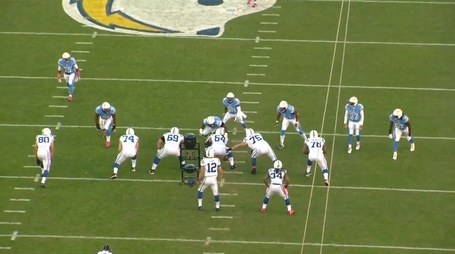 At the snap, Weddle, Gilchrist and Walker drop into zones in the middle with Walker under Darrius Heyward-Bey. Darrel Stuckey rushes off tackle and Johnny Patrick blitzes from the corner.

As a result from the unusual blitz, Luck looks left to see who's coming, then checks right to see if Walker is coming too. Upon seeing him in low/high coverage on DHB with Shareece Wright over top, Luck scans left again looking for an open man from the blitz side. However, Corey Liuget draws both the Center and Right Guard, and Larry English stunts inside to take the Left Guard, leaving Kendall Reyes free when the Left Tackle picks up Stuckey. Trent Richardson picks up Reyes, but now Johnny Patrick has a clean lane on Andrew Luck, who fires quickly to Coby Fleener for a catch short of the first down as he's hit and brought down by Patrick. The right tackle spent most of the time blocking no one, a sign that the protection missed something and someone on the defense was at an advantage. 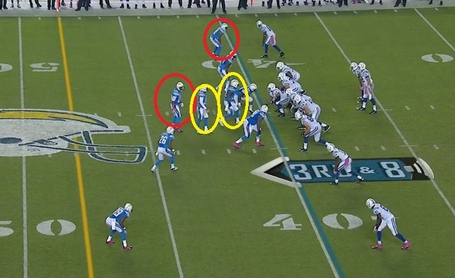 Here they are in the same basic alignment, but over the middle to maybe make Luck think it's a blitz through the A-gap. Luck uses a count to get the defense to show their hand, and sees that Cox (top red) is blitzing. Stuckey (lower red) again blitzes inside: 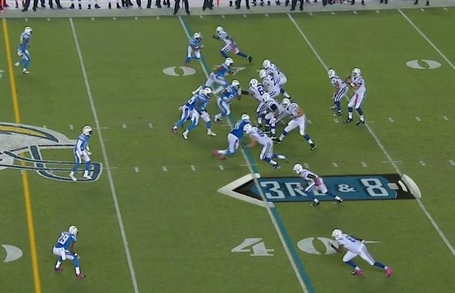 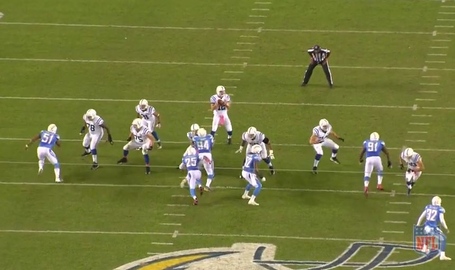 Well, the Chargers drop down the safeties and send Eric Weddle (left yellow) and Reggie Walker (right yellow) into the zone again, and Luck hurries his throw a bit looking for the easy pass to an open T.Y Hilton, who has the pass slip through his hands. He was well short of the first down anyway, with two defenders near him.

The blitzes were basic overload style rushes, but with good disguise and good execution. Last year on a similar blitz, Vaughn Martin kept messing up his initial step and drawing just one blocker, making it harder for the secondary blitzers to get free. Hope you enjoyed the quick breakdown.

Update: I've decided to call it the Shocker formation. It's a clever noun with an electrical reference to the Chargers name. Also, it uses key groups of two and one player: Two defensive ends/one outside linebacker, two strong safeties/one free safety, two cornerbacks/one nickelback, and two 'prowlers' (or rovers) with one a blitzer.