Which area needs improvement for the Chargers to have success moving forward? Marver thinks Philip Rivers needs to better leverage clean pockets, like the ones the Chargers offensive line gave him in week five.

Every week I'll be focusing on one area in which the Chargers could use improvement in order for them to achieve future success. This is the first post of this series, and also my first post since returning from a three month stay in Europe; if you aren't familiar with me as a poster, it is entirely understandable. (And if I start using colour instead of color or refer to this sport as American Football, please forgive me. Or just blame Angela Merkel or Golden Dawn or something.)

Last week's first half in Oakland was nothing short of pitiful: the Bolts went into halftime down 17-0, unable to score anything against one of the NFL's worst defenses in 2013. The same guy we've talked about as having a better year than he's ever had was guilty of multiple misreads last week, as Jerome outlined earlier this week.

I went ahead and looked at the game film one last time this morning, looking for other reasons that potentially cost the Bolts points, and was astounded at Philip Rivers' lack of patience on several pivotal plays. I'm going to highlight three plays below where Philip gets rid of the football to an undesirable location while having a completely clean pocket. 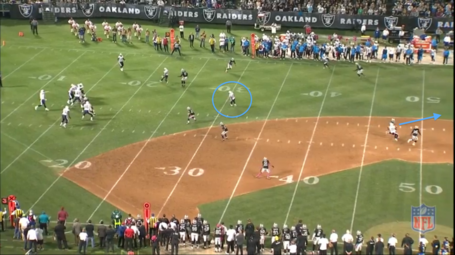 This was Philip's first interception, where Usama Young intercepted the pass nearly twenty yards clear of any Chargers receiver. What made the play awful wasn't just the decision the throw the ball deep -- Eddie Royal actually stops just as Philip throws the football, and Royal may have a slim angle to get open -- but that Antonio Gates was wide open at the first down marker.

While I don't mind when Philip takes chances, there's no excuse for this one. It's a third down, he has a player open at the sticks, and the pocket is clean. D.J. Fluker has literally nothing to do, and even if Philip chooses not to throw the ball to Antonio, he could (theoretically) move right in the pocket and wait for someone else to break free.

Basically, throwing the Royal is clearly the worst decision he could have made here at a time when a decision doesn't have to be made. 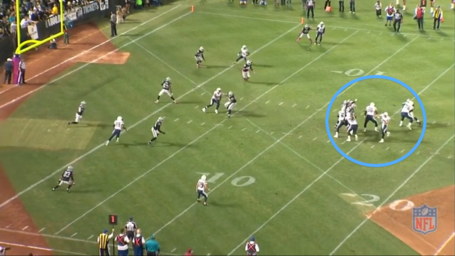 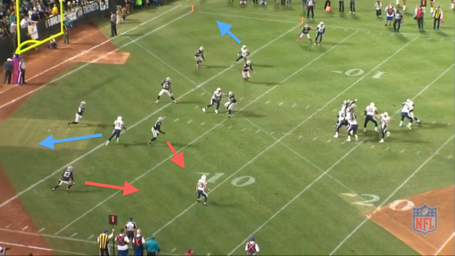 This is a first-and-goal checkdown early in the 2nd quarter to Danny Woodhead. While this wasn't a horrible mistake, it was another case of Philip being impatient in a situation where you're hoping to pick up six points. Check out the pocket in the first figure; no one is even remotely close to touching Philip. He doesn't have to (and shouldn't) get rid of the football yet.

Plus, there's little chance of Woodhead reaching the endzone here. While he may be one of the most elusive Chargers, there are two Raiders able to close on Woodhead without any Charger capable of providing a block. This is a low upside choice in a situation where Philip can wait for something better.

The old Philip would have noticed the clean pocket and allowed one of his receivers to improvise to the corner of the endzone, possibly after a pump-fake (or head-fake) to Woodhead or Keenan Allen (at the top of the screen). The new Philip seems jittered after a season of no protection whatsoever, leading to an eagerness to get the ball out of his hands ASAP. Even when he has better protection that he could wish for (and just a three man rush). 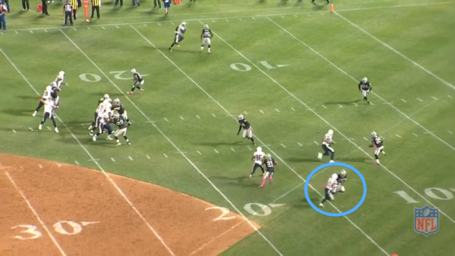 This is a 3rd and 2 at the six minute mark in the 3rd quarter, down 17. A first down here means a first down inside the red zone. So what does Philip do? He throws into tight coverage in a situation where he has plenty of time to wait for a better option. And, predictably, Tracy Porter bats the ball away leading to a fourth down field goal attempt.

While Philip recognized the single coverage, it's actually the one with the tightest coverage; Tracy Porter hasn't been an above average corner since 2009, but he's clearly all over Royal on this play. Keenan Allen (top) has a yard or two of separation against D.J. Hayden, whose coverage rating (according to PFF) is nearly as bad as Porter (-4.3 to -5.2). Ronnie Brown has Nick Roach four yards off him (but still in front of the first down marker).

Either of the other single coverage options had a higher probability of leading to a completion, but that's not the point: Philip doesn't have to throw to any of them! The Chargers front five handled the Raiders four man rush with ease. With two single coverage options on the same side of the field, if Philip holds onto the ball another second or two, there's a real chance one of them gets truly open for a pivotal first down inside the red zone.

In week five, there were several rushed throws from Philip in crucial situations where a pass wasn't even necessary. For as much crap the Chargers offensive line (rightfully) took last season, it's time we both recognize they have improved -- and give Philip a hard time when he doesn't take advantage of it. Because if the Chargers want to win in week six and beyond, it's necessary that Philip leverages every clean pocket he gets.