Patrick Green breaks down two plays on the offensive side of the ball that caught his eye from the last two weeks.

Welcome to a brand spankin' new weekly series here on BFTB that will feature one play that caught my eye from the past week's Chargers game. It can either be on the offensive or defensive side of the ball. I'll do my best to not discriminate too much, but in full disclosure, I'm a bit biased toward the offensive side of things. Also, I'm more than happy to take any and all requests. So, if you see a play during the game that you want featured for that week, feel free to tweet me about it or something. Don't be shy.

Since this is the inaugural edition of Chargers Playbook, we're going to have twice the amount of fun. So, yes, two plays are featured this week, one from the Cowboys game and one from the Raiders game. This week's star is none other than Danny Woodhead. What can you say? The guy may be small in stature, but he was born to play the game of football.

Here's a little bit of context for you before we jump into the play itself. San Diego had just come off a three-and-out on their first possession of the game. They needed to jump out to an early lead and put some pressure on Tony Romo and the rest of the 'Boys. After a beautiful 31-yard catch and run by Keenan Allen, the Chargers were finally set up to take a shot - and boy, did they ever. This was an absolute gem of a play call by Ken Whisenhunt. 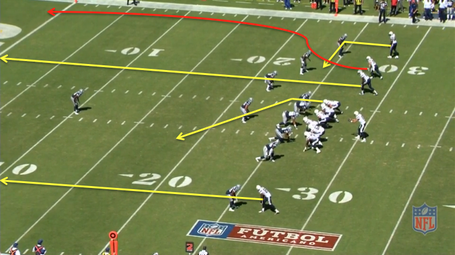 San Diego comes out in "13" personnel (1 RB, 3 TE, 1 WR), which usually signals to a defense that a running play is more than likely. This forces the Cowboys to matchup with four linebackers at the expense of an extra defensive back or two. However, the Chargers spread them out, a formation that any defensive coordinator would prefer to defend with their nickel (5 DB), or even dime (6 DB), package. This creates mismatches all over the field in favor of the offense. Even with that, though, it's important to note that this play very well could have been a dud if the Cowboys would have played anything other than man-to-man with a single high safety (Cover 1). The three vertical routes were built to attack that safety and it puts him in an unenviable position, as you'll see shortly. In a nutshell, it was not only a beautifully designed play, but also a perfectly timed one by the Chargers.

The Play in Action

The motion by Gates was designed so Rivers could discern before the snap what coverage the defense was in. If it turned out to be a man-look, as it did here, he was going to look to take a shot deep because the safety can't be in three places at once. The real key here is that the linebacker and corner decide to switch their assignments, leaving the linebacker matched up on Woodhead. If you look closely, you can see Rivers do a quick double-take, as if he couldn't believe his eyes. Also of note is that the way Woodhead's route was designed (with him widening out downfield) ensured there was no way the safety could slide over in time to help out on him. Unenviable, indeed. Oh, and did I mention the beautifully thrown ball by Rivers?

[Note to self: Keep this play handy for the next time you need to be cheered up after the Chargers rip your heart out for the millionth time.]

Following a Danny Woodhead fumble being returned for a touchdown, San Diego was down 24-3 late in the third quarter to its hated rivals. Philip Rivers and company responded by driving 78 yards down to the two yard line, largely on the back of a 51-yard reception by Vincent Brown. After a negative run by Ronnie Brown, the Chargers decided to get a little creative and utilized Woodhead to punch the ball into the end zone for a much needed score. 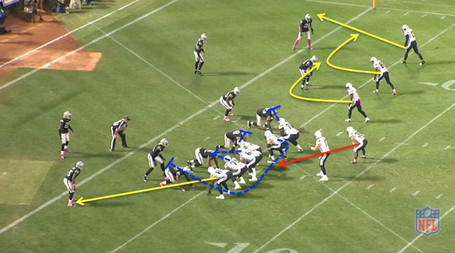 I'm a huge fan of the shovel pass near the goal line. I'm not sure why it isn't used more in the NFL in that spot. Anyway, notice the defense has its nickel package on the field and both safeties are positioned high, out of the box. With Clary pulling and Hardwick and Fluker cleaning up the backside, there's three offensive lineman to block three defenders (2 DL, 1 LB) on the play-side. This is where I think things went a little awry, but Woodhead ended up making it a moot point.

The Play in Action

I, of course, have no idea how this play is actually designed. If I had a say, though, I would leave that defensive end (incorrectly labeled by me as "OLB" above) unblocked. Judging by Clary's reaction after the play and because I believe Whisenhunt and McCoy are pretty darn smart offensive minds, I'm going to assume it was designed the way I've laid it out above. The beauty in leaving that defender unblocked is that you're essentially blocking him with the play design by making him run himself out of the play - a hallmark of true option football. So now you're left blocking two with three, allowing you to use Harris and Troutman to double team the tackle and still have Clary available to clear the way down field. Again, it didn't end up making a difference on this day. It might, however, the next time around, and I certainly hope there is a next time around. I absolutely love that play in the red zone, especially with a player of Woodhead's skill set.

Hopefully the Chargers continue to show this kind of creativity on offense, because they're going to need every bit of it along with every bit of Danny Woodhead in order to walk away with a win this week against the Colts. Any given Monday, right?