Analysis: "Reaching" for D.J. Fluker and Trading Up for Manti Te'o

Providing a reason not to go nuts about the San Diego Chargers picking D.J. Fluker well above his expected mock position or trading up for Manti Te'o.

Share All sharing options for: Analysis: "Reaching" for D.J. Fluker and Trading Up for Manti Te'o

Upon the Chargers selecting D.J. Fluker, there was some outrage by fans. Many of the complaints were opinions, which I couldn't prove right or wrong. One complaint, though, that I could answer was whether or not "reaching" for D.J. Fluker meant that the Chargers were sacrificing value, while they could have been selecting someone projected to go much earlier, like Star Lotulelei or Shariff Floyd.

I went ahead and examined the top reaches and top fallers, defined as the top ten and bottom ten percent of actual draft position minus average mocked draft position, of all players expected to be first round picks (based on an average mock position of >= 32) since 2007. The results were surprising:

Neither one of these groups is particularly impressive, and the aggregate statistics show this:

There are many statistical tests out there which we can use to determine if the difference between these three groups is significant, in a statistical sense. One of these tests is the Independent T-Test, which takes the sample means and standard deviations from two samples, and returns the likelihood that these two samples have the same population means. This type of test is particularly useful for small samples, like the one we're using; in fact, it was developed for the exact scenario of small samples (and its results converge to the results of z-tests at large enough samples).

I also went ahead and removed the restriction on picks 7-15 to see if these significance tests hold for all reaches/fallers. In fact, they do.

Conclusion on "reaches" and "fallers"

There is something significant about the fact that players fall and (at the risk of confusing Bayesian logic) it would have been foolish to pick a player at pick 11 simply because he was projected much higher. These players fall for a reason, and they shouldn't be considered bargains.

While reaches selected in slots 7-15, like Fluker, have lower overall numbers than normal picks in this range, it isn't a statistically significant difference. In other words: reaching for Fluker at pick 11 is nothing to worry about.


Trading Up for Manti Te'o

Similar to how I examined the complaint above regarding the D.J. Fluker "reach", I examined the merits of a similar complaint about the Manti Te'o selection: trading up for Manti Te'o wasn't worth it. The NFL draft has been thoroughly documented over the half-decade plus, so I was able to actually go take a look at every player that a team traded up to select since 2005 in order to draw some sort of conclusion about the quality of players selected. Are these players worth it?

The aggregate statistics show a slight advantage for the tradeups in CarAV/G and AP1 rate, though a slightly lower rate of making the Pro Bowl. Some of the other statistics show some subtle differences in the population of the two groups: though the average selection season is basically equal (suggesting no year bias), the tradeups are selected roughly half a pick before the regular selections; this means the CarAV/G difference is less than it appears in that column, though not by enough to overturn the overall result.


What about the distribution of these players?

A look at the standard deviation difference between the two groups, though, suggests looking further into the distribution of these players. Take a look at this chart plotting the CarAV/G at different percentiles for the two groups: 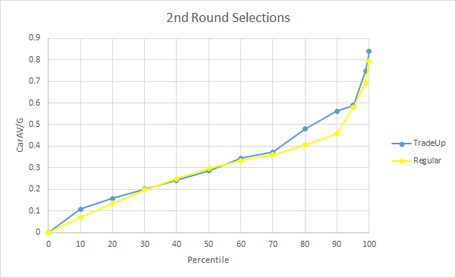 Clearly, the players teams trade up to select present higher value at the good end of the spectrum (ie. the higher percentiles).

Trading up to select Manti Te'o is not trading away value. Whatever value we gave up to move up the draft board is worth it, as a fan, as tradeups in general have a better chance of turning into a productive player. This isn't because of trading up itself, but because teams (in general) correctly identify the players worth trading up for; and we have no reason to believe Telesco is less capable of this than the league in general. In other words: trading up for Te'o may be indicative him being a more productive player than the average 2nd round pick.

One final note about players teams trade up to select. Arguably, the best 2nd round picks in four of the last six drafts were players that teams traded up to select: last year it was Casey Hayward; in 2011 it was Colin Kaepernick; in 2010 it was Rob Gronkowski; in 2007 it was Eric Weddle. And these aren't the only good players selected in this fashion. Among the others: Lofa Tatupu, Andy Levitre, Max Unger, Lavonte David, David Harris, etc.