How Much is the Chargers 11th Overall Pick Worth?

If the "Big 3" left tackles are already gone when San Diego is on the clock, the Chargers should look to trade down. How much value could the Chargers expect in return?

Share All sharing options for: How Much is the Chargers 11th Overall Pick Worth?

Every spring, a new NFL year blossoms and with that blossoming comes draft day. Draft day gives new hope to all 32 franchises and their fans. Fans of the San Diego Chargers know both the jubilation of drafting a future hall of famer (Ladainian Tomlinson) and the fake optimism of those reach picks that everyone knows probably won't pan out(Buster Davis, Larry English, Sammy Davis etc...).

With the Chargers holding the 11th overall pick of in the 2013 NFL draft, and knowing the offensive line is the biggest need for this team as it stands right now, one could only hope that when San Diego is on the clock there will be a guy by the name of Luke, Lane, or Eric waiting to hear his name called next. According to many mock drafts, those 3 men won't be available at the 11th pick to be holding up the lightning bolt jersey with Mr. Goodell. So what then?

Should the Chargers hold firm and draft a tackle that would be considered a reach at #11? Perhaps they should try to fill other holes on the roster. Maybe they take a chance on a guard, Chance Warmack that is. Maybe they look for a Star, Star Lotulelei to solidify that young front seven. Perhaps they take the best available talent at this slot regardless of position. Or maybe, just maybe, the Chargers can take advantage of a general manager willing to give up some for just one.

If the left tackle of the future is not there at #11, I believe that the right thing to do is not trade up, but to trade down and acquire a few more picks in later rounds. With those picks, the Chargers can start to fill in the holes left in the roster by the old regime. This is where economics truly comes in to play.

A draft day trade is all about value. Back in the 90',s a guy with impeccable hair named Jimmy Johnson came up with a draft pick value chart known today as "The Chart". Although the Chart has been considered random and not entirely accurate, the Chart has been widely used by franchises on draft day ever since its inception. In the Chart, each pick is given a value. The 1st pick overall is worth 3000 points and the last pick in the entire draft is worth just 2. How much should the Chargers expect in return if they were to trade the 11th overall pick to a team say like Minnesota who is sitting both at #23 and #25? 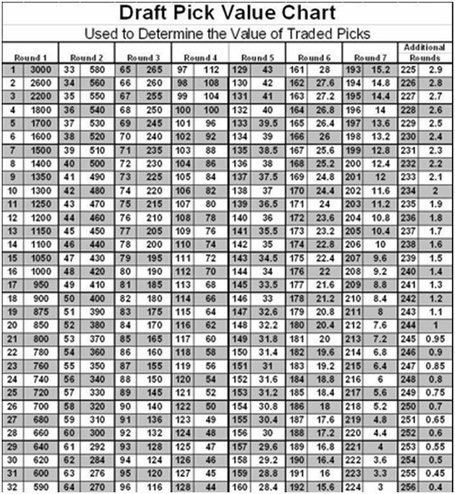 If you want to see these values applied to every pick in this year's draft go here.

Let's take a look at a couple of notable draft day trades the Chargers have made in recent years and applies the values used in the Chart:

There are many flaws associated with the Chart, including pre-dating the new CBA and things such as compensatory picks. It also has a very unrealistic talent curve, in which the fall off after the 1st pick is very steep. However, much like the 2-point conversion chart most coaches carry around on the sidelines, everybody loves to use a quick easy reference. Here's to hoping the Chargers take can take advantage of a team's use of that reference.