BFTB Mock Draft: Who Will Be Left at 11?

David Marver uses a general additive model with an additional smoothing algorithm to try and best predict who the San Diego Chargers will select with the 11th overall pick in the 2013 NFL Draft.

Share All sharing options for: BFTB Mock Draft: Who Will Be Left at 11?


What kind of model is this?

What the model does not do:

While I'm not going to divulge the exact variables that are used in the model or the exact model algorithms, I will provide a basic framework for what types of variables are used:

At different ranges, the variables used are/may be weighted differently or removed altogether.

2013 is an anomoly as far as drafts are concerned: no deal has been reached between the Chiefs and a player, while there are several different players mocked in this slot. As such, the data predicts an incredibly volatile top 5 this draft, which should make for a great viewing experience. Let's take a look at the projected top five pick odds:

A few things that jumped out to me:

Great question, I'm glad you asked. The graph that follows shows the odds of any given player being chosen after that draft slot. Basically, whatever the value is at 10, that's the odds the player is still draftable at pick 11. Here's how this looks for the notable offensive linemen: 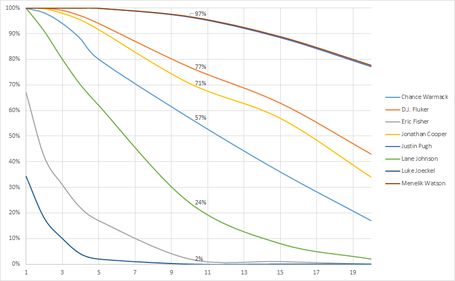 Doesn't look good if you're hoping the Chargers end up with one of three "elite" tackles in this draft. However, the odds are good that one of Fluker, Warmack, or Cooper will be available.

The same chart for WR and DBs: 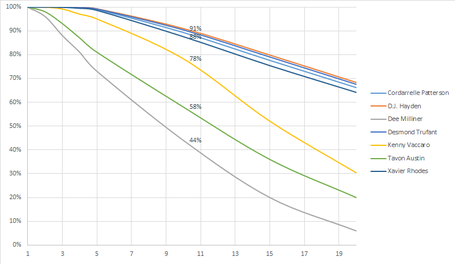 For those of you yearning for some help in the secondary or for another weapon for Philip, that chart is certainly good news.


The interesting storyline: where will Te'o and Barkley go?

Two of the more interesting storylines of this draft, in my opinion, are those of Te'o and Matt Barkley. Te'o for obvious off-the-field questions and a poor showing in the BCS title, and Barkley for an up-and-down collegiate career and general doubt on whether he can play at the next level (despite the multitude of praise heaped his way over his lengthy career at USC).

Here's the distribution representing the odds of the player being selected at any of these selections. Te'o has a more bell-type curve, while Barkley's is a classic "quarterbacks mocked at the end of the first/early second tend to jump up" distribution with a very small blip in the early teens. 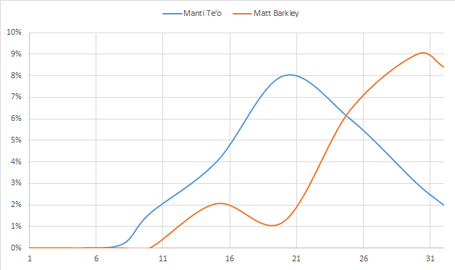