The Chargers decide that they'll tempt fate against a very good Falcons team by being as careless with the ball as they were against Tennessee. Big Mistake.

Share All sharing options for: Week 3 Grades: Falcons at Chargers


This is really pretty simple, and it's a point that will get lost among all of the Norv Turner / A.J. Smith bashing that will take place on other media platforms this week in San Diego.

Very simply, 1) the Chargers made too many mistakes against a quality opponent, and got their butts kicked. 2) It's too early in the season to make definitive statements about anything, with one exception (see Parting Shot below).

Let's get on with the horror show... grades are below the jump.

Of all the things that the Chargers absolutely, positively, cannot have happen in 2012, it's the return of midseason 2011 Philip Rivers. Unfortunately, that's the Rivers we saw on Sunday. Rivers' 2 INTs were both terrible decisions that had the effect of putting the Chargers in a 3-score hole at halftime, and later effectively ending the last chance the Chargers had to get back in the game. Both also came as a result of trying to force the ball to Antonio Gates, and in both cases, Rivers missed open receivers on both plays (see One Big Play Below). The stats reflect the utter futility of Rivers' day: 55% completion percentage, and a miserable 4.6 yards per attempt. Lastly, for the first time in a regular season game since Rivers became the starter, the Chargers failed to produce a touchdown.

Yes, Ryan Mathews' fumble was a critical mistake. Yes, it cost the Chargers a chance to take an early lead. However, a review of the footage shows a RB with the explosive burst and hard running that this offense has desperately needed this season. While the game was still in contention, Mathews was the best player the Chargers had on offense, accounting for 76 yards on 15 touches. His limited output is a result of two factors: a game that got out-of-hand before halftime, and probably a coaching staff that overreacted to his mistake. Jackie Battle added a 55 yard run in garbage time, and continues to earn additional playing time.

There wasn't a good game in this bunch. WR Malcom Floyd had his worst game in some time, dropping passes that are normally routine catches. He had 52 yards on 3 receptions, despite being targeted 9 times. WRs Robert Meachem and Eddie Royal are still trying to work into the offense, contributing a combined 6 catches for 50 yards on 10 targets. It pains me to say it, but the TEs were virtually non-existent. Antonio Gates, Randy McMichael, and Dante Rosario contributed 5 catches for 27 yards on 9 targets. Rosario followed his 3 TD game with a lost fumble, which had no effect on the game.

It goes to show you that a good running back can make an offensive line look much better. The truth is that the line played well for the 1st half, allowing a couple of mild pressures and opening holes for Mathews to exploit. Also, pass protection was fairly good until the Falcons got to a 20-0 lead. Also, the line did a fair job picking up blitzes. The biggest negative was that no one up front could handle Falcons DE John Abraham, who collected the only Falcons sack on the day against LT Mike Harris. Also, it's not a good idea to use LG Tyronne Green on pulling play-action fakes - he was late a couple times and gave up cheap pressures on Rivers.

For the first time, DT Aubrayo Franklin did not make his presence felt inside. As far as that goes, no one really made their presence felt. DE Vaughn Martin had a schizophrenic game, accounting for one of the Chargers' 2 sacks of QB Matt Ryan, but was also pushed off the ball on more than one occasion. There simply wasn't enough push to open holes for the LBs, and as a result Ryan had way too much time to find the open receiver. That contributed to the Falcons lopsided 36:14 time of possession, which in turn wore the defensive line down.

Lots of tackles, one sack, but no truly big plays. OLB Antwan Barnes got the only sack among the LBs. ILBs Takeo Spikes and Donald Butler combined for 25 tackles, a result of too much time for Ryan to throw, and lots of short and intermediate route tackles. Butler in particular was abused by future Hall of Fame TE Tony Gonzalez, and generally appeared lost in zone coverage - pretty much the opposite of last week.

Except for FS Eric Weddle and CB Antoine Cason, this unit struggled. In particular, CB Quentin Jammer had an awful game, getting beat repeatedly by WRs Julio Jones and Roddy White. On the other side, Cason continues to give too much respect, but also was credited with 3 defensed passes and a late INT to help hold down the margin of defeat. CB Marcus Gilchrist was part of the bracketing tandem that was abused by Gonzalez. SS Atari Bigby wasn't bad - the Defensive Holding call against him was terrible. All told, the safeties accounted for 22 tackles, not surprising when Ryan often had 4-5 seconds to throw the ball.

Nothing special here. Coverage was generally decent on both punts and kickoffs. PK Nate Kaeding provided the Chargers' only points of the game on a (barely) made 41 yard FG. P Mike Scifres punted generally well, but added a 29-yard shank that allowed the Falcons a short field and easy scoring opportunity in garbage time.

Here's some read meat for all the Norv Turner bashers - he was flat outcoached by Falcons DC and former colleague Mike Nolan. Nolan, as he did last week against Denver, showed a lot of blitz looks, only to drop into zone coverage. There seemed to be plays where Rivers anticipated pressure that wasn't really there. Further, Turner and Rivers never went to the no-huddle to limit the Falcons looks and substitutions. Still, it's hard for any offensive coach to overcome his players not taking care of the football.

On defense, this was the Chargers first chance to show that John Pagano could do a better job against spread passing games than deposed DC Greg Manusky. Falcons OC Dirk Koetter constantly kept the Falcons in a no-huddle look, which limited the substitutions and looks Pagano could give, and the Falcons took full advantage of the resulting soft zones and 4 man rushes.

Furthermore, why on earth is Rivers, Gates, Mathews, et al still on the field late in the 4th quarter of a game that was well out of reach, especially if your just going to punt the ball away on 4th down? 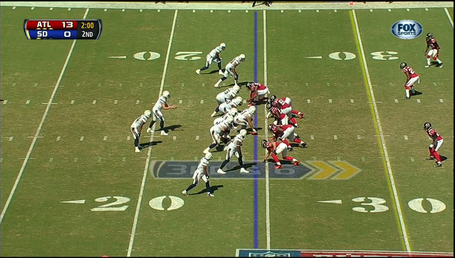 The Chargers are showing 11 personnel, balanced, strong right. The Falcons are showing a 6-man blitz. The first mistake has just occurred... Hardwick doesn't snap the ball and draw an offsides penalty. 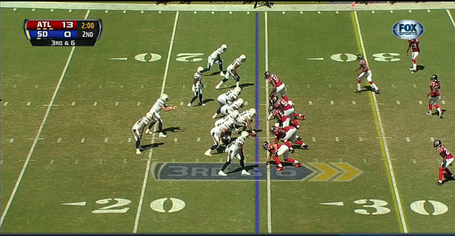 In response to the rush, Rivers sends WR Eddie Royal in motion, leaving Gates as the only receiver to the right. The Falcons, shift, showing straight man coverage. 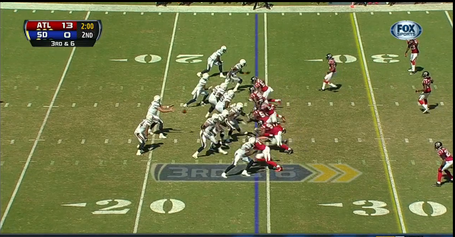 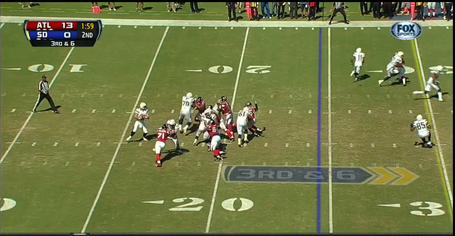 Mathews has picked up the blitz. Rivers is at the end of his drop, and the pocket is clean. The ball should come out now. He has both Eddie Royal on a Flat route, and Gates on a Drag route. This should be an easy 1st down, except Rivers holds the ball. 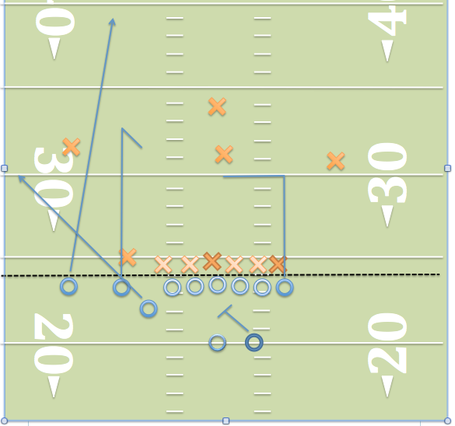 Here's the routes on the play. Something like an 826 H Block S Flat. 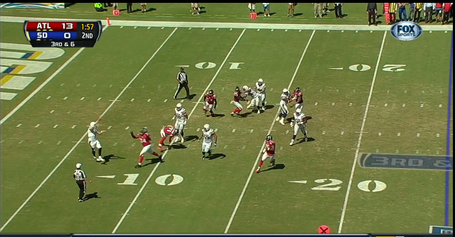 Rivers holds the ball too long, and gets flushed by Falcons DT Peria Jerry, then does the one thing Rivers should never do - throw on the run, off his back foot. (Offscreen) Gates has turned back towards the sideline, following his QB, with Falcons S Thomas Decoud right behind him. 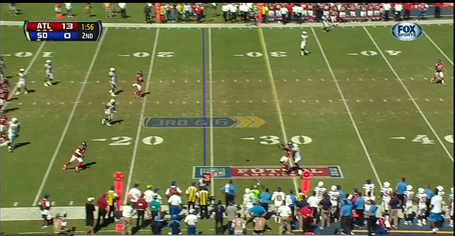 The ball takes too long to get to Gates. Decoud undercuts Gates and makes a circus INT. The rout is on.

Looking (Not) Forward To:

Arrowhead Stadium, otherwise known as the graveyard for the Chargers 2010 and 2011 postseasons. Hopefully this time, we can drive a dagger into the Kansas City Chiefs season, conclude September at 3-1, and walk out with our second divisional road win of the season.

Roger Goodell, you really are not as smart as you think you are. Either that, or you're basically gutless in that you'll challenge and bully everyone except for those who need to be challenged and bullied more than anyone - NFL owners.

It's pretty evident that the NFL ownership wants to break the referees union, er, um, I mean strike a fair deal. They evidently don't care about the horrendous state of officiating conducted by replacement refs... who have been essentially been thrown into shark-infested ocean waters next to a barrel of chum at high tide without a lifejacket and no swimming lessons.

NFL Owners, I get that simple greed is enough for you to cut off your nose to spite your faces, but since you knew you we're going to break the referees' union... err, um, uh, I mean take a hard stance in negotiations, couldn't you have at least hedged your bets by taking extra time during the offseason to get the replacements game-ready?

Really, I shouldn't just feel good about them getting an occasional call right, or not biffing a crucial replay challenge, or remembering how many timeouts each team has or... wait, they can't even do those things consistently? Oh well.

At least they haven't directly decided the outcome of... wait... never mind.