Share All sharing options for: Charging Back: Atlanta Falcons at San Diego Chargers, 2008

Let's rewind back to the 2008 season, when expectations of a playoff berth were all but totally out of the question for the 4-7 Chargers. At home after consecutive losses to the Colts and Steelers, the Chargers were in desperate need of winning out with help from the Broncos losing out to reach the playoffs (which eventually happened) and this game was a must win the moment Adam Vinatieri's kick went through the uprights as time expired the week before.

The first quarter of this game went fairly well for San Diego, despite a failed 4th-down conversion to open the game. That failed 4th-down gave the Falcons 30 yards to get into field goal range, and they did just that to go up 3-0. After a stalled drive, the Chargers punted, which was "muffed" and recovered in the redzone which eventually turned into a LaDainian Tomlinson touchdown. The Falcons answered with a field goal, and then things got interesting.

After another stalled drive, the Falcons returned a punt just across midfield into Chargers territory. After a 4th-down conversion, Matt Ryan threw a touchdown to Tight End (and former Charger) Justin Peele to take the 13-7 lead.

Now things get downright aggravating, Raiders style. On the kickoff, Darren Sproles laterals to Legedu Naanee at the 10 yard line, who loses 2 yards. Now, starting from the 8 yard line, fan favorite Jeromey Clary commits a false start. Atlanta rushes 10 knowing a handoff to LT is coming, stuff him for a 3 yard loss (figure 1). After then running for 4 yards, on 3rd down Philip Rivers proceeds to throw the ball into the field from the end zone for a safety. 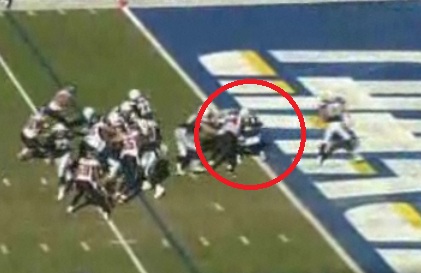 The Falcons then burn 7 minutes of clock, and good old Brandon Siler makes one of his common 4th-down/goal-line stops on 4th-and-1 keeping Michael Turner out of the end-zone and holding the 15-to-7 score going into halftime.

The second half gets underway and after a 50-yard drive, Quentin Jammer forces one of two fumbles in this game. Eric Weddle picks up the ball and returns it 86 yards for a touchdown. During the return, Matt Ryan chases after Weddle and cold-clocks a referee. It's blurry, but take my word for it (figure 2). The 2 point conversion fails when Floyd, of all people, can't come down with a catch.

After swapping punts, Atlanta again drives down the field to set up a Harry Douglas touchdown catch to open the 4th quarter. On the next drive, penalties forced a re-punt after a 3-and-out allowed the Chargers to try something new: Jacob Hester took the direct snap and ran it for 28 yards into Atlanta territory. After a holding penalty pushes the Chargers back, Nate Kaeding lines up for a field goal, which is subsequently blocked. Hooray. 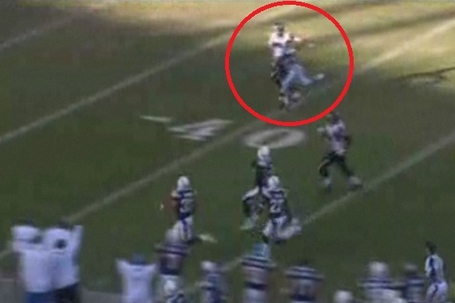 However, before the Falcons can convert a third down, Jammer strips Michael Turner of the football. After driving into the red zone again, the Chargers settle for a field goal — this one was not blocked — and that brought the score to 22-16. The Chargers force a 3-and-out but when Rivers is sacked on second down and the Chargers are left with a 3rd and 19, they punt and hope the defense can bail them out again. They don't.

This year, the Charger's defense and offense are better, but so is Atlanta's. Much more so than they were in 2008. Will the Charger's improvement be enough to win? I hope so. 27-23 will be the final on Sunday.