Share All sharing options for: Week 2 Grades: Titans at Chargers

Norv Turner and Philip Rivers discover that Dante Rosario is the cure to Redzone-itis, the defense bottles up the biggest Fantasy Football Team Killer in the NFL, and the Chargers handle their business to get to 2-0 for the first time since 2006.

As much as we Chargers' fans have griped about bad luck with injuries, we sometimes have to remember that luck is random and for whatever reason, tends to even out.

Last week against the Raiders, the Chargers got a huge injury break when Oakland long-snapper Jon Condo left with an injury. This week, the Chargers got away with 3 fumbles in their own territory, none of which were recovered by the Titans.

Just to be clear, I believe the Chargers were the better team in both games and deserved to win both games. Their play, especially on defense, has been marvelous so far this season. The offense has been efficient, if not always maximizing their scoring opportunities.

All of this is to say that my grades may seem a little harsh for a blowout victory, but there's clearly plenty to harp on. Without further ado, this week's review starts after the jump.

I know this seems a little harsh, but the grading for QB Philip Rivers is very simple. In games where he turns the ball over, he cannot get an A. That said, Rivers was exceptional sliding up and out of the pocket to buy time for his receivers to find holes in the zone. Also, continuing from last week, Rivers' accuracy was marvelous, completing 75% of his throws, and pushing the ball down field more than last week, up to 8.9 yards per pass attempt. Also, his touch on the TD throws to TE Dante Rosario was terrific. On the downside, Rivers was more careless with the ball than was the case against the Raiders. The INT, and his 1st quarter fumble came from trying to make chicken salad out of chicken crap.

Once again, this grade come mostly s as a result of simply not doing anything to screw up the game, until the 4th quarter. Curtis Brinkley, quite frankly, was awful: he doesn't seem to read blocks, does too much east-west running, and can't be trusted in pass protection; Rivers' 2nd fumble was a direct result of his missing a blitz pickup by Titans LB Zach Brown early in the 3rd quarter. Brinkley's own 3rd quarter fumble luckily didn't do any damage. RB Ronnie Brown and Brinkley combined for 51 yards on 22 carries - a pathetic 2.3 yards per carry. In the 4th quarter, once the Titans defense was worn out, Jackie Battle and LeRon McClain combined for 88 yards on 16 carries, a much healthier 5.5 YPC average. It also helped that Battle and McClain didn't waste time running north-to-south.

WR Malcom Floyd and Rivers have established the kind of rapport that only comes with years of playing together. It showed last week with Floyd's TD reception, and this week with 109 yards on 6 receptions, as Floyd seems instinctively to know where Rivers will expect him to be when the pocket breaks down. WR Eddie Royal contributed 18 yards on 2 receptions from the slot. Unfortunately, Rivers is still trying to get on the same page with WR Robert Meachem, as he went reception-less on 4 targets. At the TE position, Antonio Gates was not missed, as Dante Rosario, Randy McMichael, and Ladarius Green combined for 108 yards on 8 catches, with 3 TDs for Rosario.

Mike Harris, you're no Brandyn Dombrowski. Unfortunately, you're not a healthy Marcus McNeill or Jared Gaither either. Harris spent most of the game lined up across from The Dombrowski Killer (Titans DE and former Raiders OLB Kamerion Wimbley), and while he didn't technically allow a sack, he gave up some pressures and was flagged twice for holding. Opposite from Harris, RT Jeromey Clary had a second straight rough game, this time allowing a sack to his opposite: Titans DE Derrick Morgan. Also, considering Clary's issues with speed, can we stop running WR slip-screens to his side of the field? in the middle, C Nick Hardwick was really good at helping out with both RG Louis Vasquez and LG Tyronne Green inside. Still, anytime your side possesses the ball for 3/4ths of the game (43:39), you're doing more than a little right.

For the second straight week, the defensive line had a marvelous game. DTs Aubrayo Franklin and Cam Thomas were stout for the second week in a row - when they were in the game. DEs Kendall Reyes and Corey Liuget were also terrific for the second week in a row, with Liuget contributing heavily towards Weddle's 1st quarter INT (see One Big Play below), plus a pass defensed. Once again, the only negative with the group was DE Vaughn Martin, who was consistently handled on the line, and also contributed heavily to Tennessee's best drive of the day by hitting Titans QB Jake Locker late and drawing a roughing penalty after the QB had run for a 1st down. The tackle numbers are low, mostly because the Titans never had the ball, and the LBs and DBs cleaned up.

ILB Donald Butler had an A+ game; he was everywhere. Among his highlights were a great stuff of Titans RB Chris Johnson on 2nd and 1 for no gain, and a tipped ball that should have been intercepted. OLB Shaun Phillips was a real pain in the Titans right side, his constant pressure never allowed Locker to get comfortable and regularly flushed him from the pocket. OLBs Melvin Ingram and Jarret Johnson added a couple of tackles, and 1 pass defensed. The leader in tackles was reserve LB Demorrio Williams, with 4 solo tackles. The grade would have been higher with a couple of sacks, but Locker's mobility was also a factor.

For the second week in a row, tackling was spot on. Holding Tennessee's speedy and talented receivers to a paltry 13 catches for 163 yards is rather impressive. As an additional bonus, S Eric Weddle came up with an early INT that gave the Chargers a chance for two quick scores and put the Titans behind the 8-ball for the entire game. Weddle and SS Atari Bigby combined for 7 tackles and a pass defensed, with the only mistake being Bigby's drop of a 2nd INT. Among the corners, Quentin Jammer, Antoine Cason, and Marcus Gilchrist played well overall, combining for 9 tackles. The only serious mistake among the CBs came from Cason, who played too far off Titans WR Kendall Wright on the Titans only TD of the day.

It pains me to say it, but the biggest play the Teams was involved with also led to the Titans only TD drive of the day. The only good thing about the return was that PK Nate Kaeding managed to get outside of the return man and force him slightly back inside where the tackle could be made by reserve S Corey Lynch, temporarily preventing a TD. Beyond that, the kicking game was solid, with Kaeding converting his only FG attempt from 26 yards, and going 5/5 on extra points. Unfortunately, Kaeding did not draw any touchbacks from kickoffs. P Mike Scifres averaged 49.3 yards per punt, with 1 downed inside the Titans 20 and no touchbacks.

This is the kind of game I like to point to when people say that Norv is a bad football coach. Sorry, but, no. He may not be a great coach, but his work during the week to find a way to take advantage of Tennessee's defense at the TE position (without Antonio Gates) was incredible, as was his ability to cobble a running game out of the collection of spare parts the Chargers have at running back. On Defense, the work of John Pagano looks like an improvement, simply because the defense is playing like they've got a better handle on what they're supposed to be doing, and thus, they're simply reacting to the play instead of thinking during the play.

Hidden Plays (non-scoring, non-turnover plays that could have affected the outcome): 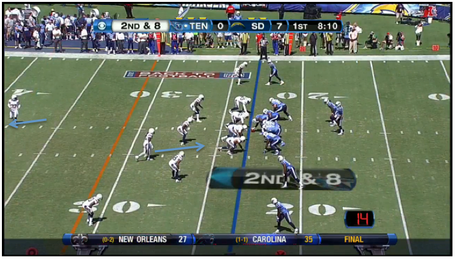 2nd down and 8, the Chargers use a 2-4-5 defensive alignment to counter the Titans use of an "11 personnel" package (OLBs Jarret Johnson and Shaun Phillips are on the line). FS Eric Weddle is retreating towards the deep middle, while SS Atari Bigby is showing blitz. 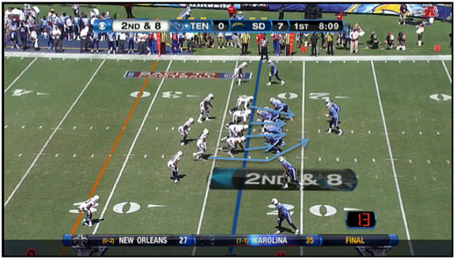 At the snap. Bibgy comes on a safety blitz, with man coverage, and Weddle playing the deep middle of the field (i.e. single high). 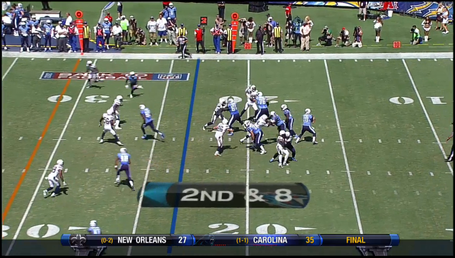 This is a 3 step drop for Titans QB Jake Locker. His initial read is away from the blitz, towards rookie WR Kendall Wright on the quick slant - covered by Jammer. DE Corey Liuget has such a good push up the middle that it takes that play away, and Locker never looks left. 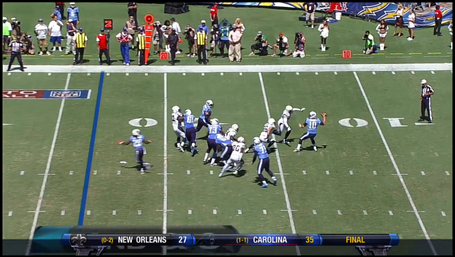 Here's where Locker's lack of experience and fundamentals compound the upcoming error. He has RB Chris Johnson open underneath, who's covered by LB Takeo Spikes (otherwise known as a mismatch). Instead, he holds for an extra beat, then throws off his back foot to avoid getting sacked by Phillips. 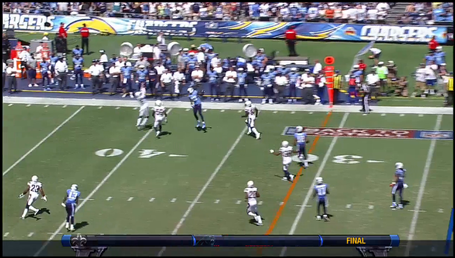 Because Locker has been looking right the entire play, Weddle has a jump on the play. Furthermore, because Locker is throwing off his back foot, he sails the ball over TE Jared Cook. This is easy pickings for Weddle, and the Chargers never look back.

Looking Forward To:
Playing a real football team this Sunday, with the Atlanta Falcons coming to town at 2-0. This will be our best chance so far to gauge just how far the Chargers have come this season. Furthermore, the Chargers can expect the return of RB Ryan Mathews and TE Antonio Gates to the offense. Best of all, with Denver playing the 2-0 Houston Texans, the Chiefs going to New Orleans to play a desperate Saints team, and the Raiders drawing the Steelers, the Chargers have a fair shot at an early 2 game lead in the AFC West to start the season.