The Chargers play a solid game on pass offense and defense, avoid critical mistakes, and are ready for dinner when the Raiders serve up a win on a silver platter.

Just so we’re clear… I’m not hating on this game. Anything that gives me an excuse to clown the Raiders and their (mostly) degenerate fans is a beautiful thing.

Author’s Note: Raiders fans reading this post and prepping their response need to read the Parting Shot below.

This game, frankly, came down to which team would make less mistakes. And as opposed to the last 2 years, the Chargers came out on the positive side of the mental toughness and poise question. Sometimes in the NFL, it's enough to simply not beat yourself.

More below the jump.

This was about as good a game as Philip Rivers can play without being truly great. If true greatness was out of reach (mostly for a lack of a running game), Rivers was the next best thing: consistent, efficient, and mistake-free. His stat line consisted of a 72.7% completion rate, and a modest 7.0 yards per attempt. I can honestly think of only 2 throws Rivers would like back, both of them red zone incompletions on the Chargers’ 2nd drive that resulted in a FG instead of a TD. Rivers, while also following the Coryell offense dictum that you never pass up an open receiver, missed opportunities had he held the ball for extra moment.

When your best running play is a wide receiver running an end around off play action, you’ve had an awful day running the ball. Curtis Brinkley, Ronnie Brown, and LeRon McClain COMBINED for 20 yards on 17 carries. This grade isn’t worse is because this group was effective in pass protection, combined for 69 yards on 12 receptions (5.75 yards per catch), and did not fumble the ball.

Malcom Floyd and Antonio Gates combined for 14 of Rivers’ 19 targets to receivers. Floyd was the best of the group, with 66 yards on 4 receptions, one of them a nicely ad-libbed TD catch from Rivers. Surprisingly, Gates only came down with 4 catches (despite being targeted 8 times), and would love to have a 3rd down pass in the end zone back – by Gates’ standards, that should have been a TD. Robert Meachem was used primarily as a deep threat to open up the short and intermediate routes, but his 43 yard catch was a thing of beauty. Eddie Royal was largely invisible in his first real game action. Still, besides the TD reception, the 23-yard catch by Floyd and the 43-yarder by Meachem were instrumental in taking the Raiders out of their "bracket Gates" strategy (see One Big Play below).

I keep hearing that offensive linemen love to run block. Apparently not, because the Chargers offensive line was infinitely better at pass blocking than run blocking. First, the good news. The Raiders only ended up with 1 sack, which was the result of downfield coverage. Supposed liability Mike Harris, the undrafted rookie LT played quite well. It didn’t matter who the Raiders played opposite him, no one got through to Rivers. Now the bad news… the absence of Jared Gaither prevented the Chargers from running much to Harris’ side. That meant running right, and running behind RT Jeromey Clary, who wasn’t very good. Against the Raiders, particularly DEs Matt Shaughnessy and Lamarr Houston, Clary really struggles. That said, none of the backs behind the O-Line really have much burst or acceleration to hit the holes that do appear.

I’d like to say a heartfelt thank you to the New Orleans Saints for releasing Aubrayo Franklin. And in an offseason of solid football moves, this might be the best value move A.J. Smith made. Franklin was terrific in pushing the pocket and occupying defenders, allowing others to make big plays to stop the Raiders running game. All of the defensive linemen played solid and were active, but the rotation really began to assert itself in the 3rd quarter, blowing up running plays and collapsing the pocket. Corey Liuget and Kendall Reyes were particularly disruptive as the game progressed. The group combined for 5 solo tackles, and a pair of QB hits.

Because the defensive line played well, the linebackers were mostly able to flow to the ball and rack up the tackles… 24 in total. OLB Shaun Phillips looked something like his old self, collecting 2 sacks in the 4th quarter as the Chargers’ defense iced the game. The sole defensive turnover came courtesy of rookie OLB Melvin Ingram, who forced a fumble in the 1st quarter that killed Oakland’s promising 1st drive. ILB Donald Butler and Phillips also collected 2 Tackles for losses apiece. The only real liability with this group came in pass coverage against Raiders’ RB Darren McFadden, but that’s a tough assignment for anyone.

The best tackling on the day came from the secondary, with Safeties Atari Bigby and Eric Weddle accounting for 15 total tackles. Corners Quentin Jammer, Antoine Cason, and Marcus Gilchrist contributed an additional 17 tackles. All 5 players were really rather good in space. With Denarius Moore and Jacoby Ford out of the game, none of the corners were really tested in pass coverage. That said, the Chargers neverending issues with the opposing teams’ TE continued, as Oakland TE Brandon Myers collected 65 yards on 5 receptions. Bibgy also missed an opportunity for an INT late in the 1st half that would have taken 3 points off the board for Oakland.

Welcome back, Nate! It’s not the playoffs yet, so I’ve got no qualms in overpraising your actually highly praiseworthy performance. Thanks to your 5 for 5 performance on Field Goals, the Chargers were never really in position to pay for squandering outstanding field position during the second half. Furthermore, abetted by the kickoff change from the 30 to the 35 yard line, Kaeding’s 7 kickoffs netted 6 touchbacks, thereby neutering the dangerous (and fumble prone) Taiwan Jones. Mike Scifres punted 3 times, producing zero touchbacks and a kick average of 54.3 yards. Lastly, while I wont praise our special teams for falling on Oakland P Shane Lechler while he was playing middle infielder, praise is justified for Dante Rosario, who took advantage of a mistake by Oakland’s Personal Protector and blocked a Lechler punt.

It did not take Norv Turner long to figure out two things about the Chargers’ offense and the Raiders’ defense. One was that there would be no running the ball, and that the deep passing game was largely unavailable. Norv, being smarter than some of you think, did what a good coach does, and took what the defense gave him. Thus, the 12 receptions by running backs which served largely as extended handoffs.

On the defensive side, John Pagano made clear what the mission was: Stop Darren McFadden. McFadden totaled 28 touches for 118 yards, but aside from a couple of decent runs, and a couple of decent receptions, McFadden was not explosive enough to relieve the Raiders’ need for big plays from anyone else. Beyond that, Pagano became more aggressive as the game went on, forcing QB Carson Palmer into short throws that created clock-killing drives. Only one sack came off a blitz, and all three came in the 4th quarter with the Raiders in "push the ball downfield" mode.

As far as clock management goes… Ugh! Of all the ways Norv chose to handle the endgame (54 seconds remaining, Oakland with 2 timeouts left), I think it was poor all the way around. Why risk running plays that rely on handling 2 exchanges of the ball – couldn’t we have just put Ronnie Brown in the Wildcat and let him run off clock by sprinting towards the sideline, then falling down in bounds, instead of McClain dives? Second… why on earth are you punting?

One Big Play: Rivers to Meachem in the 1st quarter. 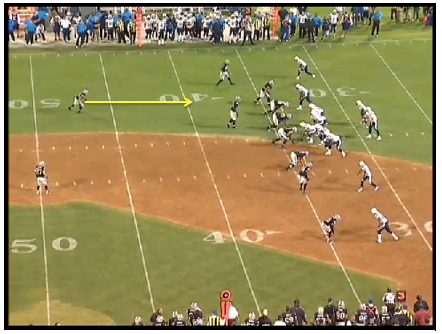 On this play, the Raiders show a 2 deep safety look, with the LBs and extra DBs near the line, showing blitz / man press coverage . 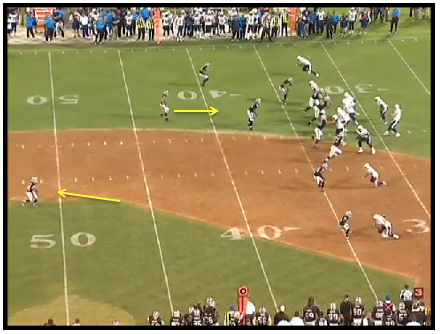 One safety retreats toward center field, while the other safety crashes in towards TE Antonio Gates. No blitz, just a 4 man rush. The safety crashing in shows single high safety, man coverage underneath. 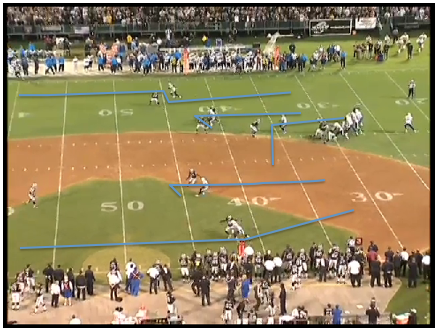 Classic Coryell offense. This is something like a 969 S Comeback H Cross. Rivers has hit the back of his drop and looks deep first. He sees Meachem with separation and knows where he's going with the ball. Notice that the safety and linebacker are still with Gates - their whole aim is to make someone else beat them. 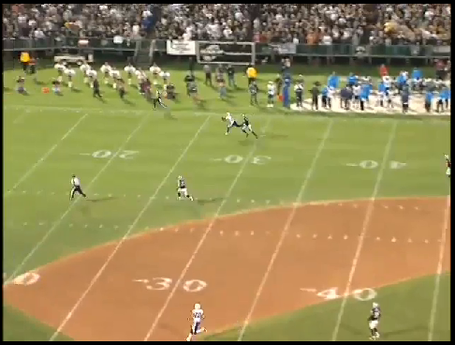 Rivers drops this ball right in the pickle barrel, and the safety in center field is far too late to help out. This is how the Chargers make teams pay for bracketing Gates.

Things That Concern Me:

Handling Tennessee at home and getting the kinks worked out before the Falcons come to town. Also, having a game review that ends at a reasonable effing hour because of the NFL's retarded 24 hour delay on reshowing a game, caused by the NFL's retarded desire to start a football game at 7 PM on a Monday night.

Look parolees, it sucks to lose. We've all been there. But, for chrissakes, man up and take the medicine you love to dish out at everyone else. And stop bragging on your rings. The Chargers have an AFL Championship ring from 1963, but we Chargers' fans don't brag on it because a) most of us weren't alive to see it, and b) it has nothing to do with the fact your coaching staff was too retarded to practice their backup long snapper. Therefore, don't brag on rings unless a) you were alive to see them, or b) can at least name the coaches and relevant players from those teams. Bragging on things you know nothing about doesn't make you a fan, it makes you a Douchecanoe.