The big offensive strategy story leading up to the home opener at the Raiders centered on UDFA Mike Harris starting at left tackle for the Chargers, and how much Norv Turner would have to hinder the offense to keep Philip Rivers upright. The reality is that the Chargers offense just ran their normal stuff, with no special attention for the left side of the line. Rivers was on XX1090 this week with Darren Smith:

Darren Smith: Did you guys game plan in any way shape or form whether it's getting the ball out quicker, rolling a little bit right. sending an extra blocker over to that side of the line, was there anything that you guys did in preparation with the inexperience, perhaps anything that was different from the norm?

Philip Rivers: We didn't, we didn't, we obviously have the ability to see how the game goes to put a back to that side or do some things but it was not an issue, and like i said depending on what hash we were on or whatever our route combination was, we called the play as we would have normally had a veteran tackle been in there or Jared been in there. Mike did a heck of a job, I didn't realize the handful of times they put Seymour over him, he held his ground. Seymour is tough to handle in a bull rush situation but he held his ground and fought. And that's the same thing we've seen from Mike all training camp and all pre-season he's a guy that loves to play and will fight until the last second. I was wondering, me and Charlie were talking. "Do you think he's the first tackle ever, rookie free agent to start the opening game at left tackle?" And I guess there was one other one that was in 1992, so he's one of two guys; he doesn't have much company of guys that have done the task that he did and started like that and he did it well.

The cover story in the after math was the anemic running game, which contributed to much of the red zone trouble. Let's dig into the numbers. The play call log for 2012 is located here. There is also an introduction to Playbook Confidential terminology here.

This week there were eight Chargers possessions that lead to one touchdown and five field goals. When you add in the fact that the single touchdown drive was aided by several bonehead Raider penalties, you get the picture of a plodding, yet mistake free offense. In total, out of 50 snaps, only 11 non-penalty aided plays resulted in first downs. The Chargers this week did to the Raiders what everyone did to the Chargers in 2010; do just enough while staying mistake free, then wait for the other guy to self destruct.

Here's an example of the troublesome running game. In the GIF below Norv used a weird looking wishbone formation with Le'ron Mcclain and Randy McMichael in the backfield in front of Curtis Brinkley. This play had the numbers game the offense was looking for, with seven guys to block seven defenders, but no one picked up Burris while (our) Mcclain got too wide.

In the passing game, we had a much better version of 7-on-7:

The overall run/pass balance shaded to the pass as you might have guessed, with just enough running to keep the threat remotely respectable.

Our inaugural look at formation reveals a starting point to start gauging Norv's predictability going forward. We can see that I and Shotgun were very pass heavy. This is expected for Shotgun, but not so much for I formation. Jumbo is obviously meant for running, and Ace turned out to be balanced. Spread receivers, regardless of formation was very pass heavy, something to keep an eye on next week. Double receivers was run heavy, while Balanced receivers was pass heavy. See if you can combine these into guessing the play next week against the Titans. For example, Ace is a coin flip, but Ace Spread probably means pass.

As I hinted at earlier while showing the GIF of an formation wishbone-ish running play, Norv used a few new looks this week. He's definitely tailoring the offense to take advantage of the versatility in his pool of skill players. He used Mcclain a bunch of different ways, he lined up Eddie Royal in the backfield a few times, and then trotted out this in the 2nd quarter: 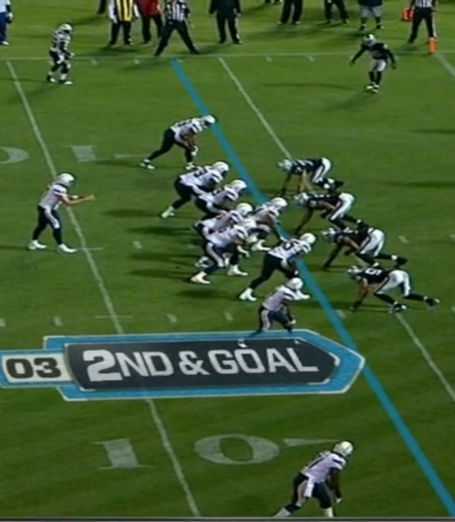 That's 13 personnel going 5 wide with an empty backfield. Brinkley and McMichael are the outside recievers, Antonio Gates and Dante Rosario are in tight, with Royal in the slot. It's almost as if Turner was trying to be Bill Belicheck for one glorious play. This particular line up led to an end zone in-completion and was never seen again. I think this and some other wrinkles introduced this week are a tease of Norv planning to evolve this season.