During the preseason we will take a look at a few of the Chargers' opponents and how to beat them defensively, and how they have won against the Chargers defensively to understand what's to come on gameday. These games will usually have been of significance. The biggest* one, in my opinion, being the overtime loss to the Broncos week 12. As much of a failure Greg Manusky was as defensive coordinator, he was also somewhat of a scapegoat. In this game, Tim Tebow managed to force overtime and ultimately, a win thanks in big part to two missed field goals by Nick Novak.

But doesn't the Denver defense deserve some credit for winning?** They did, after all, leave Rivers with a terrible, painful*** stat line: 19/36 for 188 yards and a TD. Had the Chargers won this game and finished the year the way they did, they would have won the division and made the playoffs. Instead, we're going to look back and see how the Broncos used their defense to pull out a victory over our beloved Chargers.

Take a look at my grading for their front seven:

The only two numbers you really need to look at are 58 and 92: Von Miller and Elvis Dumervil. Yes, the Chargers were down 3 linemen, including the two best overall interior blockers in Kris Dielman and Louis Vasquez. However, they weren't the biggest failures. Those would be Brandyn Dombrowski and Jeromey Clary, the tackles. They weren't beaten so much as mercilessly abused. Von Miller's score is just so ridiculous when pass rushing that I don't know how he didn't rush every down because he was masterfully disruptive.

Pictured: Disruption. Lots of it. Courtesy of Von Miller and Elvis Dumervil.

Now you may be wondering... no one was particularly good against the run, right? And you would be correct. There was a lot of running in this game. Almost 200 yards rushing. However, Norv Turner got to a point where he was so intent on running the ball, the Broncos completely dedicated themselves to defend it. Once in Denver territory in overtime, somehow everyone knew Norv would call run, run, run, Field Goal. 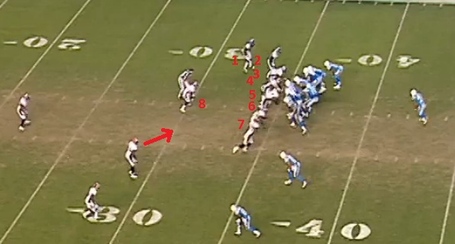 Denver, as you can see, has 8 in the box, and the rest of the secondary staring into the backfield, paying no attention to their receivers. They did this thrice. Only the final time, Antonio Gates and Randy McMichael failed to block much, which let Von Miller shoot into the backfield for this 4 yard loss. 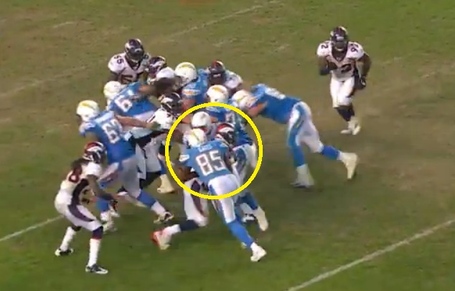 You remember what happened. Little Nate missed his second field goal of the day and gave the Broncos superb field position as the clock struck Tebow time. But watching this game showed me how simple it is to beat Denver's defense. Neutralize their pass rush. Their interior lineman are inconsistent stopping the run. Playaction will keep the linebackers on their toes. Their secondary is overrated and their safeties can't cover very well. Champ Bailey can only do so much. His strength is man coverage, so send him on 40 yard sprints frequently to tire him out and eventually Floyd or Meachem will get past him for a big play. Hard to do with only 2 starters on the offensive line, yes, but shotgun snaps aren't the best way to fix that unless there are some delayed draws to keep the outside rushers steady. I'm not the genius Norv is, but his playcalling wasn't exactly putting points on the board. Maybe next time he'll gameplan some of this info I've graciously given him. Easier said than done.

***because Tebow threw half as many passes for nearly as many yards.