Share All sharing options for: NFL Preseason Live: A Bad Deal for Locals

Let's get right into this. I was on Facebook a while ago and spotted this: 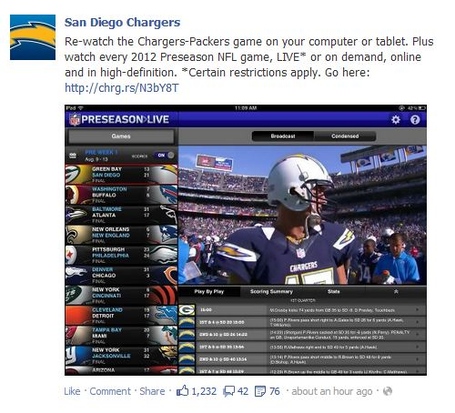 Neat, right? Wrong. Let's get to what they mean when they say "Certain restrictions apply".

That's just the beginning of it, but let's break that down like a FAQ section.

I live in Southern California, can I watch live San Diego Chargers preseason games with this?

I live outside of Southern California, can I watch live San Diego Chargers preseason games with this?

Yes and no. You can watch the last two preseason games, the ones against the Vikings and 49ers (the ones that everyone in San Diego will be able to watch), but the first two will be blacked out because they're nationally-broadcasted games (ESPN last week, NFL Network this week). Oh, also, if you happen to live in the broadcast area for the Vikings or the 49ers, those games will be blacked out as well.

What is the price?

$14.99, down from the original $19.99! (It's not clear when the price was actually $19.99, if ever, but it would seem odd that they'd drop the price at the moment when the demand was highest) That's $15 for Chargers fans, who can watch 2 games, at best, if they live outside of Southern California (and we know that there are tons of Chargers fans all over the country) and $15 for fans of other teams that get to watch all four preseason games (hypothetically). Seems fair.

Who would actually buy this?

Well, it really only works for Chargers fans that live outside of Southern California and really want to watch those last two preseason games live (which are not shown as a part of DirecTV's NFL Sunday Ticket) and hopefully live far away from San Francisco and Minnesota. It also works well for anyone who wants to watch (or rewatch) the game after it has completed, but where is the fun in that?

So, smart guy, how should the Chargers be marketing this?

Well, I like that first line. The whole thing actually isn't all too bad, but the emphasis on LIVE is what bothers me. There's probably no better way to do it, though.

In summary, NFL Preseason Live is just another way the NFL is milking money from its fans to watch pointless exhibition games. It's hardly useful at all, especially for Chargers fans, and Bolts fans have to pay the same amount for less live content than other NFL fans are receiving.