The Union-Tribune Has Lost Their Mind

Share All sharing options for: The Union-Tribune Has Lost Their Mind

That being said … it's Friday. Let's talk about it, because why the hell not?

Let's assume you have no use for the U-T besides getting Chargers news from Kevin Acee and Michael Gehlken (i.e. the articles that Richard usually has links to in the morning). During training camp and the NFL season, it's not a stretch to think that those guys will be churning out 10 articles a week between the two of them. Well, with the U-T's new pay wall, you'll get to read just 15 articles on the site each month before being required to sign up for a paid subscription.

Look, I get it. Subscription numbers are dwindling and the company has to make money now to pay for Scott Kaplan's legal bills later. The company thinks "Hey, subscription numbers are down because everyone is just reading this stuff on our website for free!", and they're not entirely wrong. Other reasons include more competition than ever before for editorial content (blogs), breaking news (Twitter), classifieds (Craigslist, Monster.com, Jobs.com) and coupons (RetailMeNot).

People used to be completely lost without the local paper. If you didn't have a subscription, you'd never read anything about your local area. You would have a hell of a time finding a job, much less buying/selling a used lawnmower. Good luck shopping without clipping coupons, Mr. Moneybags. This is no longer the case. Newspapers are doing their best to try and adapt and becoming something necessary, or at least useful, once more.

Here's how I would do it:

The way to make money on the internet is not to make something good and build a wall around it. People will either find a way to dig underneath or climb over the wall, or they'll go find something else that's nearly as good but not surrounded by a wall. Build something good, offer it for free, advertise like crazy. It works for Google. It works for SI.com. It works for us. It's not like you don't know what I'm talking about … 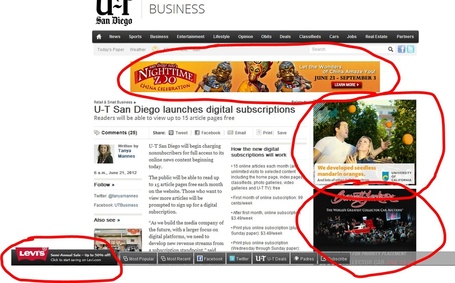 So, what I've done with my plan is lower overhead (less paper, less ink, less space needed for printing, less printing machines needed, less maintenance needed on those machines, less weight = lower shipping cost), grow my audience (via Twitter, Facebook, Google and Bing) while retaining the audience that I had, and create a site/app that can charge the same amount for ads that you did in the paper without having to spend the money on the actual ink and paper.

Here's what the U-T is doing:

No, seriously. We need to stop and go over that again. Here is the circulation for those three newspapers:

Do you mean to tell me that for the U-T to stay in business, they need to charge nearly 4x what the L.A. Times charges and almost the same as what the New York Times charges? Are they using $500 bills as wallpaper?

Look, I love the U-T. I do. It's an insane newspaper, but it has some damn good writers working there. Kevin Acee is someone that I look up to and Michael Gehlken was a brilliant hire. I enjoy Tim Sullivan's writing, but have no idea if he's even a part of this anymore (I don't think so). Matthew Hall is one of my favorite people to consistently read. I could probably name 15 more people off the top of my head that I really enjoy reading on utsandiego.com. That being said, I wouldn't pay $14/month to read them. Not when I can read the L.A. Times for $4/month or the North County Times or any of the great San Diego blogs for free.

This is like if the first Burger King opened up across the street from a McDonald's. They offer roughly the same food for roughly the same price. Most of the people are still going to McDonald's because they love that Big Mac and the fries are just better. Then, McDonald's panics because a few people have been going into the Burger King instead. They hire a crackhead stripper with fake boobs to stand out front and try and reel people in, but now families are going to BK because they're trying to avoid the crackhead stripper. McDonald's is really freaking out now, and the only way they can make the profits they once made is if they start charging $40 per hamburger. Who cares if you can get a steak in a fine restaurant for the same price? People will pay, won't they?

I guess what I'm trying to say is that Scott Kaplan is a crackhead stripper with fake boobs (in this scenario) and that nobody is going to buy $40 hamburgers from him, not even if those hamburgers are still a little bit better than the ones being sold across the street for $2.