Stadium Thoughts and Musings: This Is the Song that Never Ends...

Share All sharing options for: Stadium Thoughts and Musings: This Is the Song that Never Ends...

We all know (and hate) "The Song That Never Ends." Long used as a cheap gimmick to annoy, this song consists of a single verse, repeated ad nauseum, until the victim(s) reach a state of ad assaultum (loosely translated as: I hear that verse one more time, and this will be the punch that never ends).

Unfortunately, that's exactly what San Diego's stadium issue has turned into... a political song that repeats the same verse over and over again, with the public rapidly reaching a point of ad apatheum (loosely translated as: I don't care anymore, just go away).

This is a no-win for everyone, possibly excepting politicians looking at the next election instead of the next decade. Continued following the jump...

Why this has been awesome for politicians.

If you're an elected official, this may be the best piece of populist campaign rhetoric ever invented, because of the following factors.

Over the last 10 years, here's what we've gotten from our elected officials.

Now it's June, and while we still haven't heard what the financing plan will be, we have been hearing what our prospective new mayors have to say about a new stadium. Like current Mayor Jerry Sanders for the last several years, and Mayor Dick Murphy before him, "This is the song that never ends..."

Why this is Bad for everyone involved, except for elected officials.

Very simply, the longer a financial decision is kicked down the road, the more expensive it gets for everyone involved. Back in the mid-nineties (yes, the stadium expansion is now 15 years old), the expansion of Qualcomm Stadium cost taxpayers $78 million, when approved (without a public vote) in 1995. 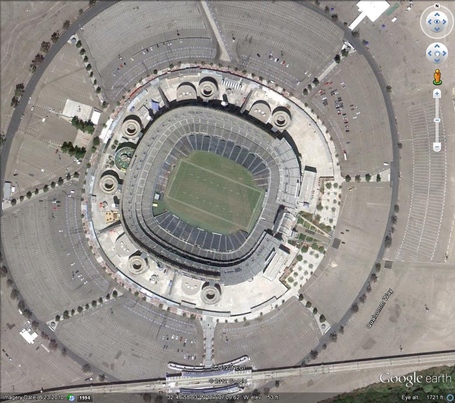 We should get another 2-3 Super Bowls out of this expansion! WooHoo!

It was already known at the time that Chargers owner Alex Spanos wanted a new football facility, especially once it became obvious the San Diego Padres were going to get Petco Park on the ballot. If you recall, Petco Park was approved in 1998 at a total cost of $450 million.

Here are the stadiums completed within 3 years plus/minus of the Qualcomm expansion (1997), and their cost (stadium information pulled from Wikipedia):

As you can see, the last decade-or-so of skyrocketing stadium costs begins with the last 3 facilities on the list. Equally important, only one facility on this list (Edward Jones Dome) has been deemed inadequate by its current user, and is the center of a potential move. BTW, we'll get to the Rams shortly.

To sum up, the Chargers and the city of San Diego are currently discussing a $1 billion facility downtown, when the city could have spent a quarter of that (closer to a third if you factor inflation) 15 years ago, and dictated lease and use terms under conditions that would have been far more favorable to the city.

Instead, San Diego went for the "cheap fix" of a stadium expansion, a rent rebate (i.e. the Ticket Guarantee) that was never given a chance to work in the city's favor, and a now-45 year old Qualcomm Stadium that the city can't even keep in functioning order (i.e. $70-80 million worth of deferred maintenance).

Best of all, we as taxpayers and fans get to hear the Chargers mentioned as "the team most likely to move to Los Angeles" in every national story when Farmers Field, AEG, or Ed Roski comes up. "This is the song that never ends. Yes it goes on and on my friends..."

It's really rather amazing what happens when the NFL decides to throw it's weight around a little bit. Just look at this last winter and spring in Minnesota for evidence. Last Friday, the Minneapolis city council put a bow and ribbon on a new stadium for the Vikings, estimated to cost $975 million. 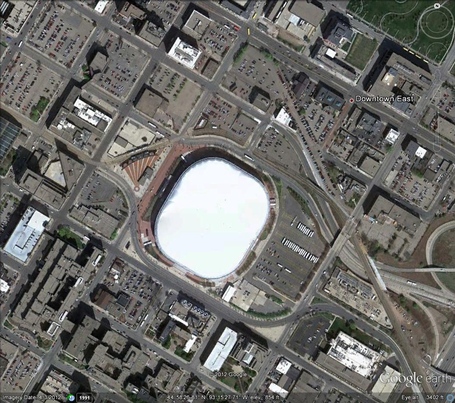 This place sucks, especially the roof. Good thing we got a new stadium.

What's interesting here is that the Vikings and the city/state governments in Minnesota were in a stalemate similar to the one here in San Diego, until NFL Commissioner Roger Goodell came to town 6 weeks ago and basically told city and state government to get their act together.

As hinted above, things are getting dicey between the Rams and the city of St. Louis. In previous posts, I've indicated that the Rams lease with the Edward Jones Dome has a clause that requires the city of St. Louis to keep the Dome in the top 25% of all NFL facilities. If this provision is not met, the Rams have the ability to escape their lease following the 2014 season. 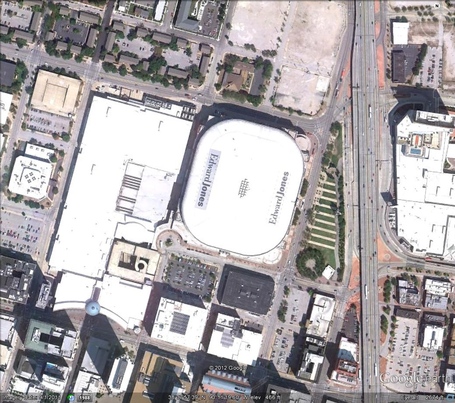 This place is 17 years old. It sucks now.

The St. Louis Convention and Visitors Commission (CVC) outlined a $124 million proposed upgrade to the Dome, with the Rams covering $60 million of the cost. This proposal was submitted to the Rams earlier in 2012, which was summarily rejected by the team. The Rams then submitted a counter-proposal, which the CVC estimated would cost approximately $700 million.

No mention was made of how that cost might be shared, if shared at all.

Update 6/1/2012: The St. Louis CVC has rejected the team's counterproposal.

I'm supposing that sometime within the next couple of years, we might actually get that report from Lazard Ltd., which could then serve as a roadmap to a deal between the city and the Chargers.

Then, after another couple of years, the Chargers will threaten to activate the escape clause in their contract. Roger Goodell, or whoever the commissioner is by that time, will make sure that the San Diego City Council understands that there's no more curb to kick the can down.

Then we'll get a vote, and the Chargers will either stay or go. Until then...

"This is the song that never ends. Yes it goes on and on my friends..."