A.J. Smith unexpectedly went after a wide receiver in free agency as soon as Vincent Jackson departed for the Tampa Bay Buccaneers. That receiver was former New Orleans Saint Robert Meachem. Drafted in 2007 just two picks before Craig "Buster" Davis, Meachem in his third year showed to be a very capable receiver for 3 straight seasons in the Saints' quick strike pass offense. He averaged 43 receptions for 660 yards and almost 7 touchdowns per season. Those numbers are quite similar to Vincent Jackson's 2006 season. Interestingly, he's only started about half of the games he's played in due to being on a roster with Marques Colston, Devery Henderson and Lance Moore. That is because New Orleans' offensive attack has mostly consisted of having four #2 receivers on the field rather than a #1 receiver and then a #2 and #3. But then that makes us wonder, is he capable of being a #1 receiver in San Diego's offense the way Vincent Jackson was? Let's find out.

Let's start with what we know about Meachem. He's fast. 4.4 flat in the 40 yard dash. He's got good hands, and he's very efficient with his receptions. We also know he didn't get much playing time in New Orleans, as about half of his games he had very little to no production statistically speaking. I like to look at the positives, so we're going to look at a few plays and see how well he'll fit into Norv Turner's offense. We'll also break down his strengths and techniques. First:

Some people criticized Vincent Jackson for making too many "body" catches and rightfully so, as not every pass requires a possession catch. Robert Meachem catches however it is necessary to do so. Making great off-balance catches with his hands as seen in the first pics, and the possession catches when he needs to secure a pass. Occasionally has lapses and drops passes. Last year he twice had a pass bounce off his hands and result in interceptions. 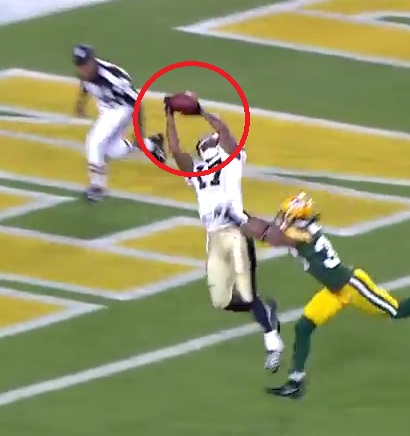 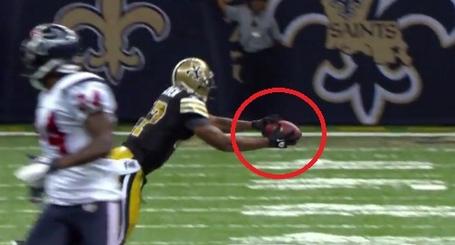 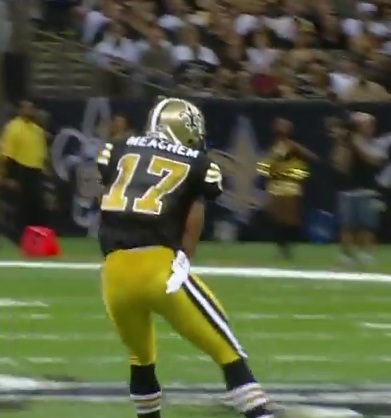 He's very good on comeback routes because he has quick feet. He uses his hands well to get off coverage. However, despite his quick feet he's not always great at sharp cuts for dig routes. Norv loves to call those routes, so we'll see how that develops. He's a very good receiver against a cover 2 defense, since his speed allows him to hit open field quickly for a 20-30 yard reception (see pic). He is dangerous on shallow crossing routes due to quick hands picking out passes and speed to pick up yards. Finally, he plays well against off coverage and can sell deep routes. 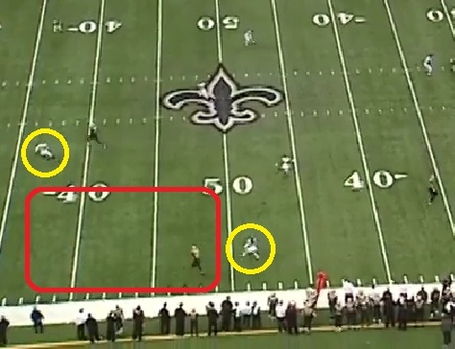 Notice the 2 defenders in yellow circles. Since Meachem has speed, unlike Vincent Brown, he can run past a defender and have a window for a reception more often than a slower receiver. Floyd would just out-jump them so having both players on each side on a 3 vertical route play would be deadly.

Meachem isn't afraid of contact, though he does look for the sidelines when it's the better option. That's the smart thing to do since Floyd usually gets hurt making a ridiculous circus catch anyway. He sometimes loses his grip on the ball and has had a few fumbles early in his career, and close calls as well. He's been better (or luckier, depending on your POV) as of late, but the close calls are still there. He can run the ball on end arounds and similar plays but he hasn't been spectacular doing so. A true wide receiver. He usually protects the ball when inside the field, and that's what he should continue to do.

Robert Meachem can line up at any receiver position, and did. Wide or slot or offset on either side of the formation, strong or weak. This is great because it adds the dimension of unknown to the offense. Opposing defenses will not know if the playcall is a run or pass simply based off of his position on the field or placement in the formation. This will certainly give Norv Turner an advantage. Like a smart receiver, Meachem recognizes when a play breaks down and looks for a spot to sit in and wait for a pass. This will prove valuable when Rivers is running for his life without Dielman to protect him. He also adjusts to coverage changes well, but sometimes runs into a lane where he can't get a pass safely thrown to him. It could just be New Orleans' system but if not, he may struggle against good defensive teams like Baltimore and New York or even Denver with their vicious pass rush. Antonio Gates seems to always know how to get a throwing lane opened up and if Meachem can improve he could be much more difficult to cover even in complex coverage schemes.

Good off-season acquisition. I have my doubts, but I honestly think that by the end of the year, Philip Rivers and Robert Meachem could be a very successful combination. With an elite quarterback like El Capitan, I'm pretty sure even I could catch a few passes in a game. I will go ahead and predict 64 catches for 1010 yards. If he's everything I'm hoping he could be then he could easily be an 80 catch 1200 yard receiver but let's not get too excited. Robert Meachem could also be no better than a regular #2. He's never had a 7 or 9 catch game. He's had only one 10 catch, 8 catch and 6 catch game in his career. He's mostly been someone who catches 2 or 3 passes per game while occasionally getting 4 or 5 as frequently as he gets 1 or no catches. Again, this could be the system he played in but he will be expected to catch at least 4 or 5 passes on a per game basis as a Charger. More when teams decide to put maximum effort into stopping Antonio Gates. If he can handle those expectations, then Philip Rivers can turn him into a Pro Bowl receiver.