Worst News Ever: Scott and BR Are Back

Share All sharing options for: Worst News Ever: Scott and BR Are Back

In case you missed my rant on Twitter earlier today, the San Diego Union-Tribune is launching a "TV Network" and it is going to be terrible. Here's why:

1. All of the "shows" are going to be in the U-T's terrible Flash player. You know who hates Flash? Everybody. Most specifically, everybody that uses their smartphone or tablet PC to browse the web. Here's an example of your typical user experience:

@BFTB_Chargers tried forever to see the promo on my phone. I finally found the link, but took me to page w/ thumbs for old Chargers Roll eps

2. Scott and BR are back as the marquee names for U-T TV. That's not a joke, apparently. The newspaper that so clearly laid out just some of the ways in which Scott Kaplan is a terrible person two months ago has hitched their wagon to him and BR (who, as I've stated before, I have no issue with at all). Not only that, they gave them a pretty girl to harass! The boys wasted no time in showing her that she was their little play thing to wrap their arms around whenever they please: 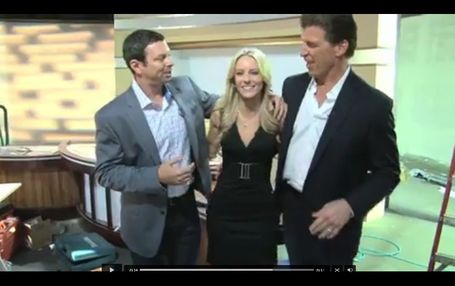 3. Most of this is stuff we've already seen. Annie has been doing video stuff for years now. Have people been checking the U-T site every day to see if she's posted a new video? I doubt it. Do they have any way of letting people know when a new video is posted? I don't think so.

So this "introduction" to U-T TV seems to be "Hey, we hired Scott and BR and we're putting tons of money into building them a studio because they're responsible people that wouldn't ever cause any problems by being sexist, shallow or inappropriate!" 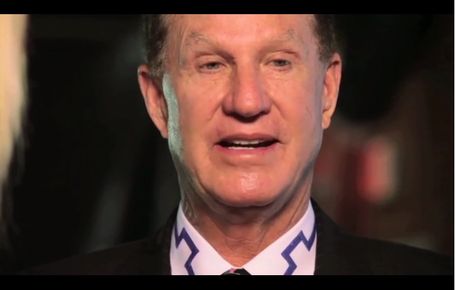 I don't understand the thought process here. "I'm going to be on camera today. Good thing the shirt that reminds everyone of mid-90s cell phones is clean!"

So, why is the Union-Tribune trying to launch a "TV Network"?

It's not difficult to figure out. Fox Sports San Diego is in town and they don't like to share. They want to hire Annie. They probably want to hire Kevin Acee. They want to hire all of the writers at the U-T that are smart, have personality and are somewhat photogenic. The U-T needed to counter with something and this is it. "Fox Sports is probably going to turn you into a sideline reporter, we'll give you your own show on our new internet network! It's going to be the next big thing!"

That's my guess, anyway. I have no issue with them trying to do this, either. I am a big fan of internet television (obviously), especially because the local news and the major sports networks do such a poor job of covering San Diego sports, but there's a right way to do this and that's not the way the U-T has chosen to start this venture. They're ignoring the core audience that would enjoy this stuff (mobile users) and have insulted our intelligence by trying to convince us that Scott Kaplan is a decent human being that deserves our attention two months after telling us otherwise.