Luckily, the San Diego Chargers saw fit to take video of the proceedings and post the entire thing online. Time to live-blog in delayed time!

00:08 They start with Norv talking, and the Head Coach is showing off his sense of humor. Points out that in the press release, the Chargers left out how "stubborn, irritable and moody" Kris is. "And that's on his good days," he added.

01:00 In Norv's first training camp with the Chargers, he asked Hal Hunter if he should expect Kris to get into a fight with Igor Olshansky every day.

01:54 Norv points to San Diego's win over the TItans in the playoffs as probably the best game by a Guard (and Marcus McNeill) that he's ever seen.

04:20 Kris is up, in a t-shirt and jeans. His forearms are about the size of Spanos' waist.

04:37 Thanks his wife, Sandy, for the last few months. "I haven't been easy to live with." This man is a football player, and seeing him leave is hard.

04:45 Says that the 9 years in the NFL have been "extra years" since he wasn't expected to make it in the NFL after playing at the University of Indiana.

05:22 Starting to talk about his relationship with Nick Hardwick. They're rivals (with Hardwick going to Purdue). Dielman keeps a sticker of Purdue's logo in his urinal (He has a urinal! I'm jealous) so that he can piss on them every day. Still, Nick is the godfather of Dielman's son and they're very close ("Which is unheard of with Indiana and Purdue.").

05:40 Still don't think I've ever seen Kris smile. This is why I'm afraid of him, I think. Hoping for a smile at some point during this thing.

06:11 "Who would've ever thought a country boy and Marcus McNeill would get along like we did?"

06:42 Despite not smiling, Kris seems like a really happy guy. Loves the Chargers, loves the friends he's made in San Diego, loves southern California and is grateful for all the memories.

07:12 "I wasn't supposed to make it through the first training camp and I'm here 9 years later. It's awesome."

07:30 Nothing phases the big man. Crying like a baby, just keeps on talking. Even says "Go ahead" through tears when it's time for questions. The man has no fear.

08:08 "This was my decision. Gotta get out while the gettin' out is still good." That's a great line.

09:00 Hard to hear the questions, but it seems like someone asked about Dielman's concussion against the Jets and if he holds the team doctors accountable. Kris seems bothered by that question being asked. I am willing to bet $2 that I know who asked that question on subject matter alone.

10:06 It's become obvious through staring at his face for a while that Dielman has no chin. Without that goatee, he'd look like an amorphous blob. Not fat, just shapeless. Nice facial hair, Kris.

10:50 I'm assuming that was Jay Posner asking Dielman if he preferred being called "dirty" or "nasty" because of the boom in his voice. Dielman's response was "Dirty, nasty, I don't care. I just know you didn't want to line up across from me."

13:45 "It's been a privilege. I mean, having beers with Peyton Manning in Hawaii? That's a guy I watched while growing up!"

14:00 Dielman smirked while saying "I got stuck out here in San Diego." That might be as close as we're going to get to a smile.

14:30 Dielman says that he doesn't have the right temperament for coaching right now, but maybe some day down the road.

16:45 Any important lessons Kris learned in his rookie season? "Yeah. Don't fight with Toniu Fonoti. I learned that pretty quick."

18:08 Kris has the best hands on the o-line and constantly badgered Cam Cameron to put him in at TE. Even caught some TDs in practice.

19:25 I knew that Cam Cameron came from the University of Indiana as well, and was an advocate for bringing in Kris Dielman, but I had no idea that Hal Hunter was there with Dielman as well. Kris says it was nice to see "a familiar face" when Hal was brought on board.

19:55 In talking about why he stayed in San Diego as a free agent, Kris talks about wanting to stay with Hal Hunter. Then says "We've all been to Seattle. It doesn't look like much fun to me." Ooooohhhhh, buuuurrrnnn. AND ANOTHER SMIRK!

22:40 "The offensive line meetings go on for what seems like hours, and it's usually just Nick and Hal debating about some stupid shit." This is the funniest retirement press conference I've ever seen. Oh, and hey! 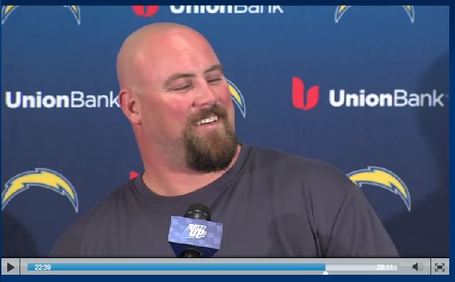 That counts as a smile, right? Fear of Dielman: Gone. Kind of.

23:30 Is Kris going to watch the Chargers? "Yeah, eventually. Those are my buddies. I'm excited to tailgate! I've never gotten to do that."

25:30 Rivers taking over because he knows Dielman doesn't like talking to the media much. Rivers: "You know me, I'll talk for hours."

26:20 Rivers' waterworks are here, as he tells the story about giving Kris a headbutt before the start of each game. "Kris always grabbed me and said 'Lead us.'"

27:46 El Capitan is here to fill our smile quotient. 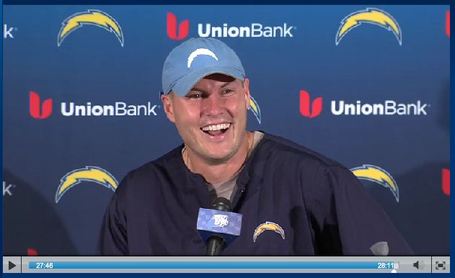 Good luck with the next chapter of your life, Mr. Dielman.