Closing the Books on the 2011 Chargers

Share All sharing options for: Closing the Books on the 2011 Chargers

It's time to visit the final 2011 salary numbers. Just like last year, the UT's Kevin Acee has compiled the final salary cap number for every player to take a check from the Chargers this year. You may want to warm up for this exercise by reviewing last year's BFTB salary analysis. This time around, a total of 95 players took in a total of $119,149,368 from Mr. Spanos. It's important to note that Acee's list is effectively a cap-hit list, more than an actual money-spent-in-2011 list. For example, he lists the $836k cap hit from signing bonus pro-ration when Buster Davis was cut. He also notes the cap value for a few veterans such as Randy McMichael, who made more than their cap number due to a veteran exemption for certain players on one year deals (which I learned from Acee via tweet). I've already covered the salaries of injured players extensively here and here, so I'll be mostly sticking to the healthy aspects of the roster this time.

For the overall team spending view, the Chargers ranked roughly #13 on the biggest team spender list (from September). They were right under the Super Bowl champion Giants at #12, and well ahead of the Super Bowl loser Patriots at #19. There were losers in the top tier of spending (Vikings #1, Eagles #2, Rams #5), and very successful teams that spent less than San Diego (Packers #21, 49ers #24, Bengals #30!). Every season there is always evidence that opening up the checkbook does not equal winning. (Check out this pretty cool cost-of-wins chart - it takes a moment to really digest)

Here is Acee's list, in spreadsheet form with position and position group added in. I can't stress enough that I'm lifting his fine work and adding in analysis. 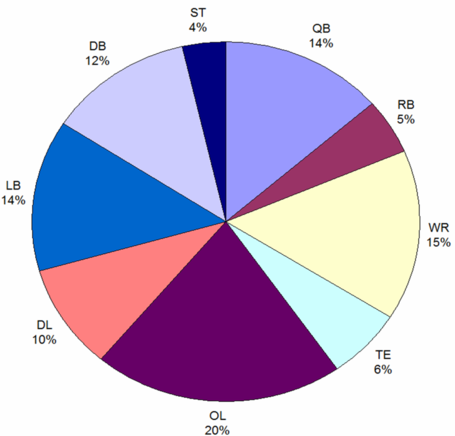 The list of skill players below is sorted by cost per fantasy point. I used fantasy points because it is a simple way to roll raw yardage and touchdowns into a single number (and also slightly dings Mathews for his fumbles). I have also included the cost per yard of the skill players for reference. Ryan Mathews continues to kill off even the slightest whisper of bust or disappointment talk by being a huge value guy among the entire skill staff. Vincent Jackson wins the Darren Sproles memorial award for franchise tag overpay. If you look at last year's similar analysis of Sproles coming off of his franchise tag year, it should be clear what Jackson's fate with San Diego is. With the same management and personnel philosophy in place Jackson will likely be offered a sizable pay cut to stay attached to Philip Rivers, and he'll go succeed somewhere else. It would be a bad value choice to pay him megabucks when compared to other receivers on this team. Please keep in mind I'm not saying VJ isn't a good or near-elite receiver. I'm simply saying his production is out of whack with his salary, relative to the rest of the team.

Kory Sperry and Bryan Walters are the official worst values owing to their super low production (They barely count). Jacob Hester and Randy McMichael get lost in middle of the pack where their special teams and blocking contributions are not counted. Gates probably right where he belongs, especially in an injury year. Vincent Brown, Mike Tolbert, and Malcom Floyd are all good values. Patrick Crayton, not so much.

5. Jared Gaither played in five games, earning $201k from San Diego while almost helping to save the O-line's season.

4. Antonio Garay places on the BFTB best value list for the second year in a row. Garay made $890k to absorb the double team beatdowns that are usually reserved for Luis Castillo, played 538 snaps.

3. Louis Vasquez was the lone cheap lineman on a rookie contract. He only missed two games and played 914 snaps in exchange for $723k.

2. Cam Thomas was paid $497k to platoon with Antonio Garay and player 395 snaps.

All of the worst five values were nailed by injuries.

5. Stephen Cooper scored $810k for basically nothing on the field in regulation.

4. Larry English flirts with this item for the second year in a row, making $1.9M for a measly 76 snaps.

3. Marcus Mcneill took in $6.3M for just over half a season.

1. Luis Castillo made $5.6M and missed almost the entire season.