When the 2011 season started, there was justified excitement over the off season acquisition of Safety Bob Sanders, a former Defensive Player of the Year and Pro Bowler with the Indiannapolis Colts. Just two games into his season with the Chargers, Sanders was lost for the season after contributing almost nothing. The statistics may show that he had no significant impact on the team, but while stats don't lie, they don't tell the whole story either. Let's examine what his presence on the field brought to the team. First, his stat sheet:

Not much to see, but there are two games worth of data and there are interesting things to know about his 102 defensive snaps in lightning bolts. Let's examine the team when playing...

One thing you will notice about the first game is that the Vikings ran for 159 yards at 6.1 yards per rush, including the dangerous Adrian Peterson. On his biggest run, Sanders completely missed a chance at tackling him after a short gain, and instead caught him 44 yards later just before breaking down coverage in the end zone and giving up a TD. Other than that, Sanders is definitely a run stopping type of player, looking for a stop immediately. He's vicious in his attack and explosive in a way that makes you want him in over the slower Steve Gregory and weaker Paul Oliver. Here are a few examples: 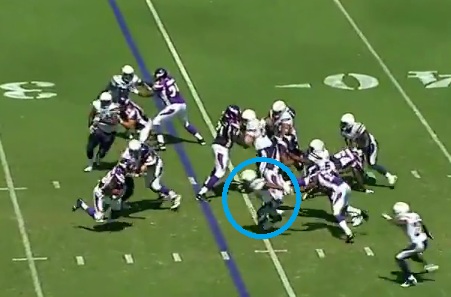 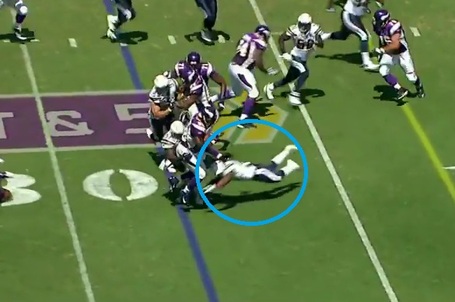 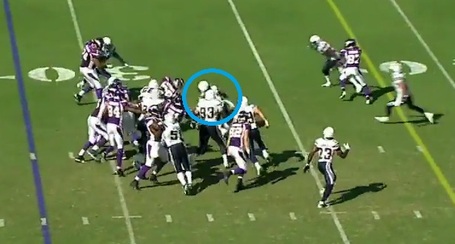 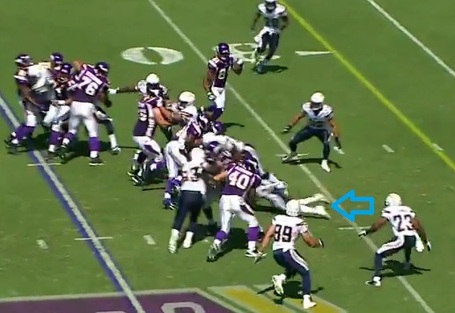 This fourth example is the most worrisome. It's why he's always hurt. His disregard for his body is apparent here, throwing himself into a pile to try and get a piece of the ballcarrier. It's admirable, but it's plays like these that cause one to find an injury as well. While Gregory and Oliver will never look to attack like Sanders, they'll make an attempt at a tackle that won't jeopardize their health. However, one of the things that was great about Bob Sanders, was that he's looking for a way to make a play, never giving up, and fighting blockers towards the play. Gregory and Oliver combined probably don't make as much of an effort as Sanders, so I applaud him on that. It's a characteristic knows as "relentlessness" that many of the best players have. Now, how was Bob's presence...

We all remember the Touchdown pass to Aaron Hernandez in the end zone where Bob was there, but couldn't defend someone 5 inches taller than him. That was always an issue. A precise pass was one he could rarely defend. However, his coverage was usually solid: 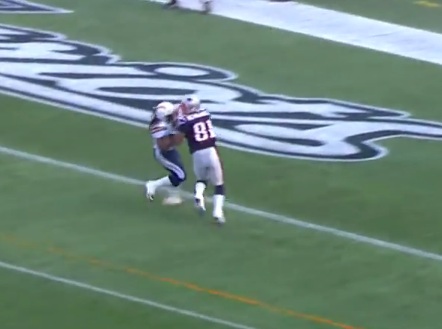 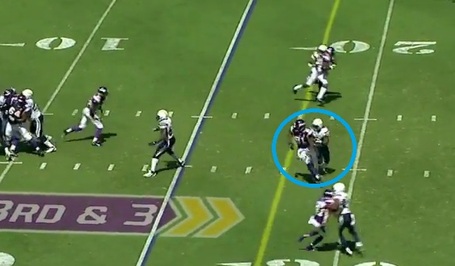 In an ideal gameplan, Bob Sanders would be a 2 down player, with Paul Oliver coming in for coverage duty, and Steve Gregory being his substitute. If he could stay healthy, he definitely provides a presence on the field and has plenty of ability to play. Whether that is enough for him to remain on the team we'll find out soon enough. But can either Steve Gregory or Paul Oliver truly take his place? Gregory was bad against the run (first pic) and worse in coverage (second pic). He's not quick enough and he's not disciplined enough to play deep or middle, and not physical or strong enough to support in the run. 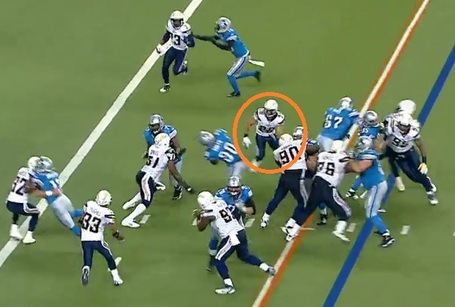 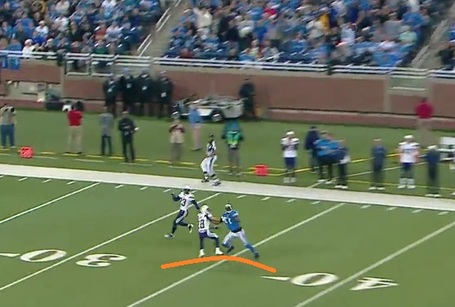 Steve Gregory just is not capable of playing at Strong Safety. He's a backup at best and should be used on special teams as a priority and not as a starter on defense. Paul Oliver is far better in coverage and just slightly better against the run than Gregory, which means he'd be a better free safety backup behind Weddle or start at Strong Safety for passing downs. Regardless of what happens with Bob Sanders, Paul Oliver should be the in the mix more often than Gregory, and with Darrell Stuckey joining in, the offseason battle for Strong Safety should be interesting and one to watch if a rookie also has a shot.