If the game is blacked-out, and there's no one in the stands to see it, did the Chargers actually blow another 4th-quarter lead?

Of course they did. This fail wasn't quite as spectacular as last weeks 4th-and-29, nor as stunning as the epic fail against Denver. This 4th quarter against Cincinnati had the air of inevitability behind it; watching it unfold was somehow routine.

This week, I saw the most bizarre game offensive game plan I've ever seen (i.e. letting a moth-eaten patchwork quilt of an offensive line spend most of the day pass blocking against a strong Cincinnati front), and some more terrible end-of-game clock management.

This was the 1st game I've seen this season where the Chargers players played resigned - not the same as quit - football. They're firmly in the Depression phase of the 5 stages of grief, with Acceptance soon to follow.

In other words, this season has become apathetic for everyone involved.

Philip Rivers continues gamely trying to win games, somehow doing too much and yet not enough simultaneously. Rivers threw for 280 yards on 48 attempts, for a rather miserable 5.83 YPA, plus the late INT to S Reggie Nelson that sealed the game for Cincinnati. I hate saying this, but in the 2 games since the Denver loss, Rivers has become gun shy. The upshot is limited turnovers, while the downside is no big plays, and only 1 TD pass over the last 8 quarters. The one thing in this game that was very surprising and very unsettling was watching Rivers gain positive rushing yardage on rollouts and scrambles (2 for 20 yards).

Did they actually play? Somehow, Norv missed the memo that the best way to protect a shaky offensive line and struggling QB is to run the ball. Rivers accounted for 20 of the teams 46 rushing yards, with the remaining 26 yards coming from Ryan Mathews on 9 carries. He carried 9 times? 9 times. As far as the passing games goes, the backs collected 10 catches (on 18 attempts, seriously?) for 68 yards. Of those catches, RB Ronnie Brown collected 4 for 27 yards (8 targets), Mathews 3 for 25 (7 targets), and FB LeRon McClain 3 for 16 yards (3 targets). The backs were decent in pass protection, although Mathews appeared out of position on a couple of screen and dump-off passes.

WRs Malcom Floyd and Danario Alexander had another strong game. Floyd turned in 4 receptions for 61 yards, while Alexander continues to play something like a poor man's Vincent Jackson, snaring 6 balls for 106 yards - and they managed this despite being targeted 1 time less than the RBs. TE Antonio Gates had (what is becoming) a nice game with 49 yards on 6 catches (8 targets). The last pass target was to TE Randy McMichael, which went incomplete. As for blocking, there wasn't any real run blocking to speak of, but Gates did give up a sack and fumble (which he recovered) when matched against Bengals DE Carlos Dunlap. According to rumor, WR Robert Meachem was on the field, but made no plays.

There's nothing here to really note, as basically the entire 2nd string o-loine, excepting C Nick Hardwick and RG Louis Vasquez were either hurt, or playing hurt. That said, Hardwick had a difficult game against Bengals DT Geno Atkins, giving up a sack and a pressure which led to the 2nd fumble caused by DE Carlos Dunlap - who beat reserve T Kevin Haslam. Another sack was given up by LT Mike Harris, playing against DE Wallace Gilberry. I'd like to say that the line was awful in run blocking, but I don't think 11 total rushes is a fair sample size. This group simply isn't very good in pass protection, as evidenced by the number of times that Rivers was forced to slide around and step up into the pocket.

DE Corey Liuget was slowed in the 1st half by the combination of Bengals LT Andrew Whitworth and LG Clint Boling, but he got stronger as the game went on, totaling 5 combined tackles. Still, the Bengals showed respect for him and ran away towards DE Vaughn Martin, who continues to struggle. DE Kendall Reyes played another solid game, and was very active in the game, showing good pursuit and flushing Bengals QB Andy Dalton on a few pass plays. DT Antonio Garay is getting better with each week, but he's still not back to his 2010 level, and not at the level of DT Aubrayo Franklin, whose presence was missed.

ILB Demorrio Williams could be the poster child for the group on Sunday. He gave up a TD against TE Jermaine Gresham on the Bengals opening drive, turning him loose to CB Quentin Jammer too soon. That said, Williams got that play back with a nice Pick 6, and later forcing a Gresham fumble in the 3rd quarter to stop a Bengals drive - part of his 6 total tackles. Beyond Williams, there was a whole lot of close, but no cigar. ILB Takeo Spikes had a solid game, notching 7 total tackles with some decent pass coverage. Still, ILB Donald Butler's great closing speed and instinct for snuffing out the running play was sorely missed. On the outside... meh. Melvin Ingram got close a couple more times, especially with a tough matchup against Whitworth, and came away with one of 3 TFLs out of 5 total tackles. Shaun Phillips and Antwan Barnes contributed nothing of note, and were actually out-tackled by OLB Larry English, with 3.

A.J. Green should have been a nightmare for the Chargers, yet CBs Quentin Jammer and Antoine Cason did a solid job of keeping everything in front of them, and generally not missing tackles (Jammer with 8, and Cason with 4). CB Marcus Gilchrist contributed an additional 7 tackles, but committed a crushing holding penalty - see Hidden Plays below. Really, the standout work came from FS Eric Weddle and SS Corey Lynch. Weddle was his ususal reliable self, but only had 3 tackles - one of which saved a Bengals TD by RB BenJarvus Green-Ellis, who he caught from behind. Lynch, on the other hand, was tested frequently and responded with 10 tackles and an INT. Lynch was refrshingly better than Atari Bigby, simply by making sure tackles and not biting hard on play-action fakes.

Coverage teams were solid, and it appears that Special Teams coach Rich Bisaccia has corrected the problems with the punt blocking unit. P Mike Scifres had something of an off-day, averaging only 46 yards on his 5 attempts, and only 1 punt downed inside the Bengals 20, although he didn't have any touchbacks. PK Nick Novak converted two chip shots of 19 and 20 yards, but missed a 54 harder in the 3rd quarter that would have extended the Chargers' lead to 6. On 3 kickoffs, no touchbacks.

I really don't understand this game plan, nor do I understand the series of adjustments on offense. I have heard that run blocking is generally easier than pass blocking. This is a struggling line with 3 backup players for most of the game, yet Norv elects to pass on 50 out of 59 total plays? Furthermore, Norv runs slow developing play-action pass plays with a struggling O-Line, without bothering to actually run the ball? The only elements of the game plan that made sense were the 3 step pass plays that were run early in the game. Then, you have a combination of poor play and clock mismanagement at the end of the game. The Chargers have 1st and 10 at the Cincinnati 17 with 1:11 to play and 2 timeouts. Norv calls 4 straight passes. 2 of which are endzone shots, the other two are quick reads that Rivers misses. Still, with 1:11 left, the Chargers should have run at least once to bleed the clock and leave no time for a Bengals comeback (or force Bengals HC Marvin Lewis to burn his timeouts).

One Big Play (the last gasp 4th down):

4th and 10. The Chargers come out in 11 formation with even distribution. Ajirotutu and Alexander (slot) are left, Gates (slot) and Floyd are right . Brown is in the backfield. The Bengals stay in their base 4-3, with ILB Rey Maualuga and OLB Vontaze Burfict showing blitz and the corners playing off.

Just before the snap, both Maualuga and Burfict drop out, and the corners (Leon Hall top), and Terence Newman (bottom) roll up. This is classic Cover 2. The Chargers are running something like a 279 S Go H In. 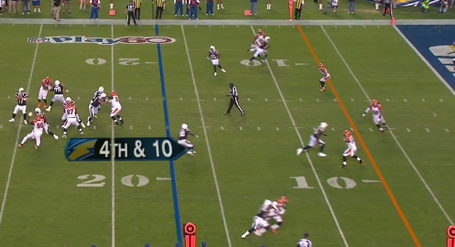 Rivers drops back. His first look is at Gates, but he's doubled by both Maualuga and Burfict, with SS Reggie Nelson (offscreen) waiting with help in the deep right side. Rivers' next read is to Floyd, who's taken too long getting upfield. Rivers knows the sweet spot against the Cover 2 is down the sideline at about 17 yards, between the corner and safety. Here's where Rivers could possibly pump to hold Nelson, then throw. But Rivers has made his decision, and Nelson is breaking.

It's not until well after the ball is thrown that Gates "breaks" into the clear. Maualuga had started cheating forward towards Brown, but his primary responsibility was the deep middle and any throw to Gates. Note that Floyd hasn't "beaten" Newman. Nelson, meanwhile is breaking towards the ball, because there was no real attempt by Rivers to hold him. In fact, as the play develops, the best option might have been Ajirotutu, standing alone at the 12, and needing only to beat OLB Manny Lawson for a 1st down.

But just to be clear, Rivers did not miss a "wide open Gates," as some have said on TV and radio.

Also, since you can still gain a 1st down, and have plenty of time remaining (plus a timeout), why not have Floyd run a fade-stop? Whatever... Norv's the genius.

January. Really, this season just needs to be over.