The Chargers went out to New Jersey to face the struggling Jets and came away with a near record performance of 11 sacks. See how the front 7 dominated in this matchup.

After a humiliating beat-down at home, the Chargers went and conquered in Metlife stadium thanks to Eleven sacks and two turnovers courtesy of young quarterback Greg McElroy. The pass rush was no doubt vicious, but coverage was tight in McElroy's eyes, and that led to a lot of coverage sacks. Run defense was so-so with a few players struggling and just as many excelling. Here's the grading for the game, and read on for more breakdown. 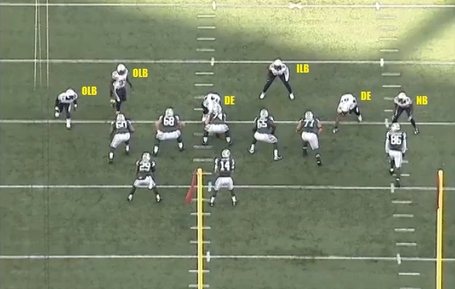 (Above) The formation is a double/double flat dime set with Liuget as the zero and Reyes as the 5 tech, and Phillips coming in as a head to head 2 gap rusher. The Jets think the blitz-happy Marcus Gilchrist is going to be coming, and he sells it by staring into the backfield. 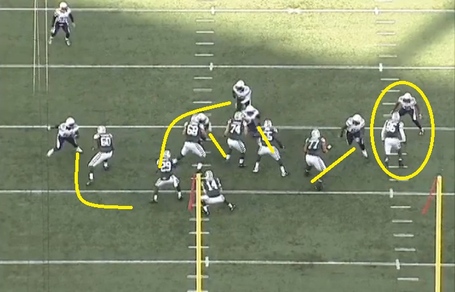 The defense attacks frontside and Phillips and Liuget do a good job drawing the interior blockers and leaving Butler free around the edge with just a RB to block. McElroy immediately looks left to try to move Weddle so he has what he thinks is an easy throw between the hashmarks if Gilchrist had blitzed where the TE would've taken his route. Instead, he sees Butler barreling down and has no throw, and no escape route. (Below) It's a mismatch and Butler immediately knocks Bilal Powell backwards 3 yards into McElroy giving Ingram an easy sack.

This is something that was missing with Donald Butler gone, aside from his great play against the run. At the whistle, Butler stood over Powell and taunted him a bit, excited with his impact on the play. This is a well executed blitz, something the team has struggled with a few times this year.

As you can see under pass rush, no one's score is particularly amazing. As I mentioned, lots of the sacks were coverage sacks and McElroy's inexperience leading to him holding the ball. In any case, there were good signs by many players.

Kendall Reyes failed on just 48% of his gradeable pass rush snaps and was successful 29% of the time. While it doesn't sound very good, keep in mind that rarely do defenders win their battle more than half the time. When you account for playaction, time to throw and blocking assignments, you learn just how hard it is to move forwards 5 yards through a 325lb guy blocking you in 3 seconds or so.

I'd like to introduce my new stat: Success ratio, with a column at the bottom of the analysis giving you a percentage of a defender's positive impact on a certain play. This will only reflect for the consistent pass rushers. It isn't perfect, but takes into account sacks, hits, pressure, decoy execution and double teams, since drawing two blockers is something that deserves a positive grade in my setup. Hope you like it.

Just to give you an example, Shaun Phillips had a 20% success ratio. That's because even though he had a strip sack fumble recovery and one other sack, he didn't really get pressure or have an impact the other 18 times he had a chance to. Therefore, his success ratio is low because he only made something happen once every five plays he went after the QB, compared to Antonio Garay, who had a good day pass rushing and earned a 42% success grade as even though he only had 4 hits and pressures, he was disruptive enough to draw a few double teams and left gaps for other rushers to get to the QB.

Cam Thomas continues his inconsistent play this year, getting pressure as a rusher but getting moved around as a run defender, or vice versa. It's frustrating because he's supposed to be the future at nose tackle and needs to play better in that respect. He only gets 30 snaps a game so it would be nice to see more constant production. It seems he has trouble recovering from his initial jump. If a linemen gets position on him, he can't recover from it like Corey Liuget can. If he can learn to try new moves between the snap and throw, he could become much more efficient and consistent with his technique. In this game, Pro Bowler Nick Mangold gave him a hard time and beat him up in the run game. A tough challenge for anyone but he could have done better.

Corey Liuget also failed to play to his standards, although he also played more than all other linemen and should do fine next week. Also, Antoine Cason looked just like Cromartie did as a Charger. 15 yards off his receiver even on third and short? I don't get it....

Glad the Jets lost. Amazing to see eleven sacks in one game, even if some of them came because the QB held the ball too much.

I would like to see the defense in a 46 with Weddle as the "Rover". The Corners are a weak spot, but it would give a new dimension to the starting 11 and the 3 main supplements.

Out of the base 3-4, there were many disguises and variations of alignments I saw in this game that made me curious. OLB's in coverage pre-snap but then rushing. Double/double sets of both DE's on the strong side and OLB's weak side. High over alignments and wide under sets. It's that variety that will make the team hard to figure out and would play to Eric Weddle's strengths. Just a thought... The Packers were successful with that during their Super Bowl run and maybe next year the offense will be fixed and the Defense can play around a bit. Wishful thinking? Hope not.

That's all for today. Leave your questions and comments below.