What Was Your Favorite San Diego Chargers Memory?

With the end of the world just hours away, it's time to look back at our favorite San Diego Chargers memories.

Share All sharing options for: What Was Your Favorite San Diego Chargers Memory?

Look, I don't mean to freak any of you fine people out, but the world is ending tonight. It's totally true. The Mayans, who are like an entire group of Nostradamuses....Nostradami?....Whatever, moving on. We haven't much time to spare!

So, that's what I did. At the end, I'll share with you some of my favorite moments as a fan of the San Diego Chargers, but first let's hear from those that matter. 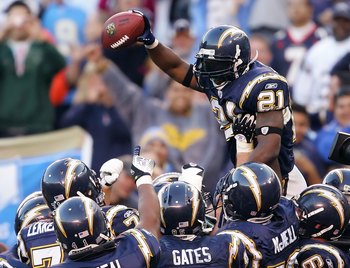 I have two: beating the Steelers in '95 and LaDainian Tomlinson breaking the rushing TD record.

If I had to pick just one: beating the Steelers.

I'd have to say Tomlinson breaking the rushing TD record. I was at that game and it was awesome. I'll never forget that.

My favorite memory is Mike Goff holding up LT for his record breaking touchdown, with the rest of the team gathered around reaching up while LT held out the ball. A magical freaking moment.

LT breaking the TD record is a tie with beating the Colts in Indy to go to the AFC Championship. Honorable mention is the plane ride home from Tampa and finding out Denver lost to Buffalo forcing a winner-take-all game versus us on Sunday night, which we won.

The Epic in Miami 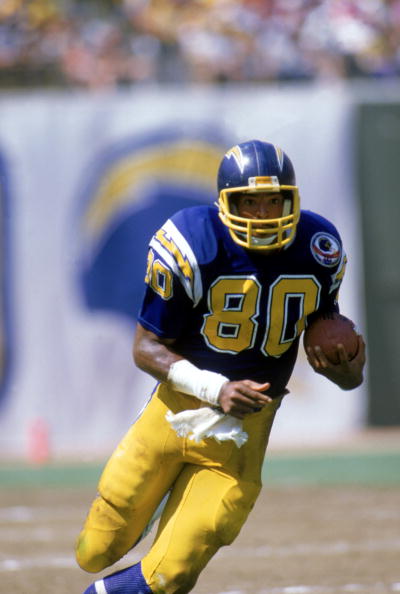 I've been watching the Chargers since 1972 and have seen a vast majority of their games since 1985, so I thought picking one favorite memory wouldn't be a simple task. I thought about the good (Air Coryell; the postseason wins against Miami, Pittsburgh and Indy; the first seven seasons of watching LT; the first five years of Rivers' career, etc.) and the bad (too many losses to count) and the ugly (the '06 & '09 postseasons; Ryan Leaf). But in the end, it really wasn't that difficult, because I kept coming back to one day:

I wasn't at the Orange Bowl that day, but I can tell you exactly where I was: In Del Mar, sitting in the family room of a good friend (to this day), watching what might have been the greatest game ever played -- Chargers 41, Miami 38. The shock of the Chargers jumping out to a 24-0 lead; the dismay (but not shock; do you remember that defense?) as they gave up 24 quick points, including the famous hook-and-ladder play (I can still hear Don Criqui screaming "Look at this! What a play! What a play!" as Tony Nathan sprinted into the end zone to end the first half); the late TD pass from Fouts to Brooks to send it to overtime;Winslow's blocked field goal, and finally, victory.

Sure, the season ended the next week in the Freeze Bowl, but that's always what happened (and still happens). They're the Chargers. This is San Diego.

But if the world's gonna end in a few hours, why not remember the good times?

November 22nd, 2009
I went to Denver and saw the Chargers climb back into the AFC West race when they crushed the Broncos on their home turf for their 5th consecutive win in a streak that would reach 11 wins.

Honorable Mention:
January 2nd 1982
The OT playoff thriller in the Orange Bowl against the Dolphins. I was not a Chargers fan at the time and I didn't live in San Diego but it is my earliest recollection of a football game. And it had the hook-and-ladder. Screw you, Mayans!

The San Diego Chargers are going to the Super Bowl! 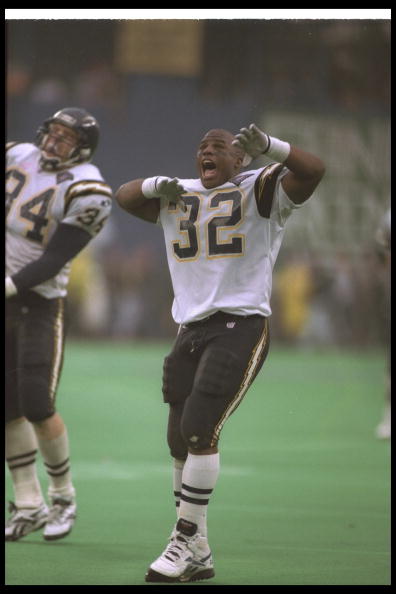 Beating the Steelers in '95 for sure. This is one of my earliest football memories and the year my Grandpa actually got me watching football. I was nine.

Another lesser moment that sticks with me is the comeback win against Tennessee in 2007 in the regular season.

Well that's easy. It's the 1994 season. That year I was still dating my girlfriend (now wife) long distance and spent most weekends in my home town of Long Beach. I would still go out each weekend that season to a sports bar somewhere in LB or elsewhere to watch the game. I'm pretty sure early that year, maybe the 4th game, the Chargers played in LA and the game was blacked out so a friend of mine and I drove to SD to watch the game and root with Chargers fans. I wore the same hat and T-shirt every game like a superstitious wonk.

The day of the AFC Championship I was in LA at the apartment of a college buddy and watched the Bolts beat PIttsburgh on a tiny little ratty TV (the same TV and same friend I watched the 1993 Campbell Conference Final with, good luck for my teams) and also listened to the Saw on 690. That afternoon/evening, when the team returned to the Q, 690 was live on the field and I remember walking around my parents' neighborhood with my Walkman and my same hat and T-shirt listening to every minute of it, soaking it all in.

Not only one of my greatest fan memories but also a very early strong tie to SD radio. 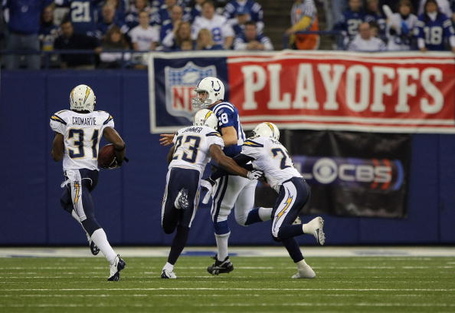 Ruining Indy's perfect season 2005. Its how I became a Charger fan.

Nothing beats a Chargers playoff win, and I've seen five of them in person. Only one, though, took place on the road. It was January of 2008, the final game played in the RCA Dome, and my first trip to Indianapolis. I was struck by how small the stadium seemed compared to Qualcomm. But the tight confines and low roof had the effect of really amplifying the crowd noise near the press box, and boy did it get loud in the 3rd quarter.

The Colts had just taken a 17-14 lead on a Peyton Manning touchdown pass to Reggie Wayne, and I thought my ears were going to start bleeding. That's when Philip Rivers threw a little screen pass to Darren Sproles, who cut to the far sideline, and ran 55 yards to the endzone. Silence. Pin-dropping, study hall, mausoleum-level silence. I've never not heard a sweeter lack of sound.

- Ben Higgins, 1360AM's The World of Sports According to Chris & Ben

Chargers beating the Colts 23-17 in the Wild Card game stands out to me as the most emotional game I've been around and the loudest I have ever heard Qualcomm Stadium. So many elements to that game, including the build-up and national whining about the Colts having to play on the road, despite being 12-4 (Chargers, you remember, were 8-8).

Roster depth won that game. Some of the names that contributed...Tim Dobbins, Mike Scifres, Kassim Osgood and Darren Sproles. LT leaves the game with a groin injury and Sproles goes for a ridiculous 328 total yards, including the game winner.

I've never been in the press box for an earthquake but I'm pretty sure I know what it feels like. Never felt shaking like that before or after.

Being at the Divisional Playoff win against the Dolphins in January 1995. Came back from 21-6 against Marino/Shula to win 22-21. I've never heard the stadium as loud as it was when Mark Seay scored the go ahead TD from Stan Humphries, then it was that loud again when Stoyanovich missed the FG for Miami at the buzzer. 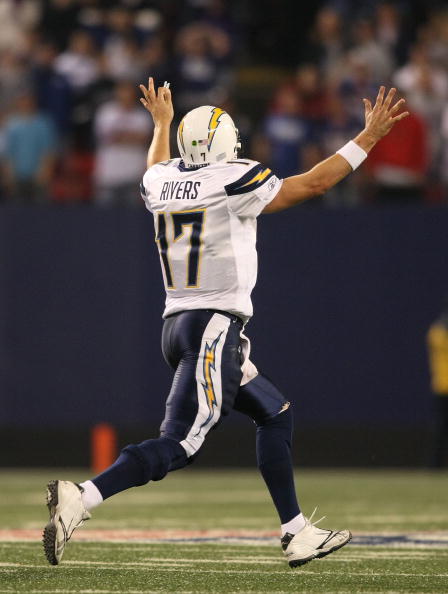 Watching LT in 2006 was certainly a pleasure. But covering the evolution of that 2009 team will remain my fondest memory for as long as we have left.

The Chargers were 2-3, having been embarrassed in back-to-back primetime games. And then they didn't lose again. Teams just don't win 11 straight games, very often. In that 11 games was the comeback at the Giants -- the TD pass from Rivers to Jackson and then Philip running the length of the Giants' sideline, holding on in Dallas and the Christmas trip to Tennessee. That team was bonded, unbeatable, on a roll.

Oh, and then came the turning point in the direction of the franchise -- the pitiful playoff loss to the Jets. Oh well, doesn't matter now.

Not surprisingly, I'm with Acee on this one. However, a large part of what makes them my favorite memories is the quirkiness of my perspective for some of the larger events in 2008 and 2009.

New York Giants (2009): I was at this game. Ask anyone, I don't even go to Chargers games when I'm in San Diego. The only reason I was going to this one was because it was the first time the team was playing anywhere close to where I lived at the time (Philadelphia) and my friend Mike insisted that we go.

The night was magical. The weather was great, I met some drunk BFTBers (miss you, calipatrick), bumped into Joe Girardi (who had won his first World Series 4 days earlier) in the bathroom, and lost my voice screaming along the words to "San Diego Super Chargers" (a song I usually despise) after the game with other Chargers fans in the parking lot. Between Shawne Merriman's key sack of Eli Manning, and Philip Rivers' game-winning touchdown pass to Vincent Jackson, it was about as good of a game as I could imagine seeing live.

Indianapolis Colts (2008): Look, the Billy Volek game? That was great. That was awesome. So was the Chargers' regular-season victory over the Colts in San Diego in 2008. However, I remember the 2008 playoff game. Some people know it as "The Darren Sproles Game" and some know it as "The Mike Scifres Game". I know it as the game when I learned about the dangers of the DVR.

I had some friends over to watch the game. Again, we were on the east coast , so the game started at 8pm. By time Nate Kaeding tied it up with a field goal in the final minute, sending the game into overtime, it was well past 11pm and some of my friends were leaving. I paused my DVR to say goodbye and walk them out, figuring that I'd fast-forward through the next set of commercials and catch right back up to the live action.

The problem is that I forgot that I was behind the live-action and just ended up watching the game "live" about 5 minutes after everyone else. This lead to me sitting, nervously watching the overtime period and waiting for something to happen, when I got a call from my father. He was screaming into the phone "I can't believe it! We beat them again!" I was asking him just what the hell he was talking about when it hit me....I was minutes behind the action. I fast-forwarded to the live action and saw a replay of Darren Sproles taking the handoff and running 22 yards for the game-winning touchdown.

That game, so beautifully played by the offense, defense and special teams (and erasing those that wanted to say "Philip Rivers didn't beat the Colts, Billy Volek beat the Colts!"), had such an absurd ending from my perspective that I'll never forget it. It serves as a constant reminder to never pause or rewind a live sports game.

In summary, I have a short memory and I really miss the Chargers being in the playoffs. What's your favorite Chargers memory? Let us know in the comments.