Has he just given up?

How many times has it been said over the years after a game that "Norv was simply out-coached"? Was that the case in the game against the Panthers? Is it just that Norv doesn't have the tools to work with to be successful? Or was it something deeper to the point that Norv is just giving up?

It's crazy how many parallels there are this year to last year, especially the last two games. Remember last year when the Chargers blew out the Baltimore Ravens in a game they had no business even winning? Then the next week they went on to be embarrassed by the the Detroit Lions.

Well, last week, the Chargers blew out the Steelers in a game they had no business winning and then go on the next week to be completely embarrassed by the Carolina Panthers.

It's pretty telling that the Chargers have now sealed their first losing season in the Norv Turner era. Now we don't have to worry about Norv being fired while never having a losing season as head coach of the team.

Vote how you wish below. You can use whatever criteria you'd like to choose how you vote. You can use Norv's job performance this week, this season, or his overall body of work. It's all up to you. 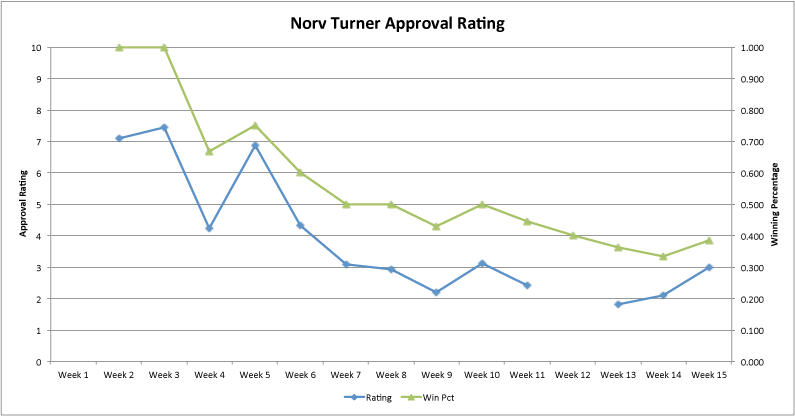