Ron Rivera and Rob Chudzinski roll into town with Cam Newton in a Santa Suit, and give many Chargers' fans what they've wanted for 3 Christmases... the certainty of The End.

This was a hideous, epic, unmitigated disaster.

When I stupidly picked the Chargers to win this game, I should have thought no 2 coaches currently in the league know Norv better than Ron Rivera and Rob Chudzinski.

I should have realized what the Chargers did against Pittsburgh would not have held up after future opponents had the chance to look at the game film, and that Norv doesn't make long term changes based on what's working well.

I should have remembered the the Chargers starting tackles were Kevin Haslam and Reggie Wells.

I should have remembered Philip Rivers doesn't understand the concept of protecting the football in traffic.

I shouldn't re-watch this disaster, because I have to work tomorrow and I don't want to get sick. With all that in mind, here are this week's grades.

The numbers are sub-pedestrian - the kind of thing you'd have been happy with during Rivers' first games in 2006 as he was getting acclimated to the starting QB position. Seriously, I can't remember 23 attempts getting less done (16 completions for 121 yards, and a pathetic 5.3 YPA). But I can remember a time when Philip Rivers didn't fumble the ball seemingly every other time he took a hit... because he wasn't holding the ball too damn low. More than anything else, it's these types of mistakes (3 of the 4 fumbles) that serve as the biggest indictments - stuff that's easily correctable, but gets worse, and player nor staff seem to notice or care. As to the killer first fumble - when did Rivers turn into Dave Krieg? The one highlight was the TD throw to Gates, whose perfect touch was a taunting reminder of how awesome Rivers used to be.

16 carries for 70 yards happens when a) the opponent builds a 3 TD lead in the 1st quarter, b) the opposing defense is teeing off on the QB and ignoring the run, c) your lead backs are both out of the game with injuries, and d) all of the above. RB Ryan Mathews finished with 7 touches for 30 yards (4 car. 22 yds, 3 rec. 8 yds.) before his season-ending injury, with no significant plays to show for his effort. The best statistical day came from RB Curtis Brinkley, who carried 6 times for 42 yards in garbage time (i.e. the entire 2nd half), managed to break a nice 13 yard run, and also pulled in 3 catches for 14 yards. RB Jackie Battle managed 2 yards on 3 carries, and added 12 yards on 2 receptions. As a group pass protection was decent.

It was well past time for WR Danario Alexander to have a bad game, and the other shoe dropped on Sunday, with zero receptions on 3 targets (? drops) and a penalty which helped snuff out the Chargers only promising 1st half possession. His lone positive play came by drawing a DPI to help set-up Antonio Gates' TD reception. WR Malcom Floyd came up with the only "big play," a 30 yard reception in garbage time. His other catch went for 9 yards and converted a 1st down. WR Micheal Spurlock contributed 1 catch for 8 yards in the 1st quarter, then disappeared. Gates finished with 4 receptions for 31 yards and the lone TD, but none of his plays were of real consequence. TE Dante Rosario contributed 1 catch for 9 yards.

The truth is the O-line was functional in the 1st 20 minutes when the Chargers still had some pulse. As the game wore on and the Panthers got more aggressive, the poor plays started piling up into a mountain of excrement. The line allowed 4 of the 6 sacks directly, with 2 allowed by RT Reggie Wells against LDE Charles Johnson. Things got worse when Haslam moved to RT, and LT Mike Harris came in. In less than 2 quarters, Harris gave up sacks to Hardy and DE Mario Addison. The T play obscured some solid play from the interior. C Nick Hardwick and RG Louis Vasquez were solid, and LG Rex Hadnot actually played fairly decently, and opened decent room for a running game the Chargers had no chance to use.

The Panthers focused a ton of energy at pushing DE Corey Liuget inside to create running room to the left, and it was fairly successful. Surprisingly, the best game from the NT spot came from Antonio Garay, who collect a sack and managed to hold the center pretty well. On the other hand, this was the 1st game where NT Aubrayo Franklin struggled to hold his place. Cam Thomas was marginally better, but not great, and DE Kendall Reyes was decent in holding down the right side, but not as good as we've seen the last couple of weeks. That said, the offense's inability to mount anything more than cursory possessions helped wear this unit down as much as the Panthers' OL played well. The group tied for 14 solo tackles, with Liuget and Reyes getting hits on Newton.

Donald Butler was seriously missed in this game, as the combination of ILB Takeo Spikes, Bront Bird, Andrew Gachkar, and Gary Guyton really struggled to slow down TE Greg Olson on the short routes. There were also struggles in space tackling both RB Mike Tolbert and DeAngelo Williams. On the outside, there were 3 heartbreak plays that came very close to turning the game. 2 were pass deflections by OLB Shaun Phillips that could have been INTs and saved the Chargers 10 points. the 3rd was a tipped pass by OLB Jarret Johnson that went straight to DeAngelo Williams, and the tip allowed everyone to overrun the play just enough to create the space needed for a 45 yd TD reception. Gachkar was the only LB to collect a sack. Spikes was the only LB to collect 10 tackles, no one else had more than 3.

The CB Quentin Jammer against speed receiver debacle continues, with Jammer giving up 6 for 57 and a TD against WR Steve Smith, plus the de rigueur defensive Holding Penalty that extends an opponents' drive. Not that everyone else was blameless - CB Antoine Cason had a better day in coverage, except for a killer 15 yard personal foul on the Panthers' opening possession, but he did force a fumble of DeAngelo Williams in the 3rd quarter to help set up the Chargers lone score. SS Corey Lynch had a very tough day covering Olsen on the intermediate and deep pass routes, while FS Eric Weddle was busy helping against the run way more than should have been necessary. Special Teams:

Aside from 1 nice Spurlock return, and 1 awful roughing the kicker penalty on Larry English, there wasn't much to see except for P Mike Scifres. Scifres' kicked 6 times for 48.5 YPP, with 1 punt downed inside the 10, and 1 that went for a touchback.

Coaching: Who Gives a Damn?

Not Norv Turner, who folded up his play sheet and went home once the Chargers fell behind early. None of the stuff that worked well against the Steelers was there... no crossing routes to Spurlock , no quick slants to Gates, Alexander, or Floyd; it was regular intermediate and deep route running and hope the RBs could make chicken salad from chicken crap on dump offs. No reverses, flea flickers, HB option throws, screens... nothing here gave the impression the Chargers were fighting for their playoff lives (and it turns out they were). And with the punt in Carolina territory in the 2nd quarter - Norv all but cashed in his chips as a Head Coach.

At least John Pagano was trying to mix things up, with some assorted true blitzes and zone blitzes mixed in. Unfortunately for Pagano, nothing on defense quite came through with the big plays, and the few occasions were the big stop was made, it was torpedoes by mental mistakes.

One Big Play (The fans show their displeasure): 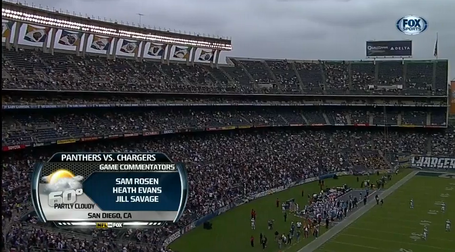 This was just before kickoff.

This was early in the 3rd quarter.

This was when Gates' TD catch was upheld (early 4th).

This was at the 2 minute warning.

The end of this wretched season.