The San Diego Chargers traveled to Pittsburgh and dominated the Steelers on route to a 34-24 victory that was much more lopsided than the score indicates. See how the defense held the Steelers at bay.

Do you see what this team is capable of when the defense can get help from the offense? A perennial playoff contender was punished in their home stadium by an injury ravaged offense and a good defense. It's games like this that make the Chargers look like a super bowl contender. All it took was some points on offense and drives that weren't 3-and-outs to let the defense take charge. And then consider that the defense was without one of it's best players in Donald Butler? And using just four defensive linemen with Antonio Garay and Vaughn Martin inactive.

With Vaughn Martin inactive, Kendall Reyes and Cam Thomas were able to get extra playing time and didn't disappoint. Even Shaun Phillips was reduced to allow Larry English a shot at rushing the passer. He too did well. Take a look at the grading for the game.

Click here for the full play by play analysis

Pass rush was excellent. First half run defense was solid. If you take a look at Cam Thomas and Aubrayo Franklin, they scored the highest and second highest grades of the season for all positions! I didn't think I'd see anyone break the 1.0 ceiling as it's just really hard since my formula makes it seem he literally played at 117% success rate, but Thomas kind of did. By my count, he had some kind of positive effect as a pass rusher on all but two of his gradable pass rush snaps, by either hitting Roethlisberger, pressuring him, drawing a double team from the offensive line. By comparison, Corey Liuget graded negatively ten times, but played twice as much as Thomas. Still, it seems that Cam Thomas can definitely play around half the total defensive snaps with no problem, about 30 to 35. Back to Franklin; for the first time this year, he was more than a run stopper. He made his presence known on pass rush plays as well with just four zeroes on his column. Check out this play, the second in the second series: 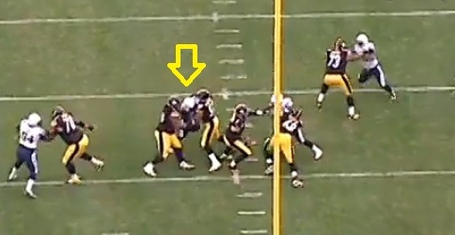 That's Franklin being double teamed, and still getting into Roethlisberger's throwing lane. You also see Kendall Reyes looking right at Big Ben, something Vaughn Martin usually does from the line of scrimmage or the sideline. What I'm saying there is that Vaughn Martin isn't effective. In any case, nice to see Franklin do more than stop the run well. Other guys who did well were Demorrio Williams as a blitzer, and compared to Shaun Phillips, Larry English had just as much of an impact with literally a third of the playing time. The biggest play of the game was the end zone recovery of a non-forward pass for a touchdown. The call, or lack thereof, was a bit iffy, but either way it was set up by Jarret Johnson crushing a tight end into the "throwing" lane.

Shaun Phillips was once a star on this defense. His past accomplishments are all that remain. Once again he failed to have a positive impact in a game with only five plays out of nearly fifty being of the non-negative type. It's depressing because he might still be on the team next year despite being a shadow of his former self. He can't get pressure anymore, and he isn't strong enough to take on linemen in the running game. He can barely handle tight ends blocking him. Enough of him though. Jarret Johnson isn't much better as a pass rusher but at least he doesn't get run over or pushed around. I'd like to mention that this team is much more successful blitzing 5 or 6.

Last year I saw house blitzes fail frequently and this game we got to see one. It was the 50 yard bomb Mike Wallace dropped. To credit of the pass rush, Large Benjamin's throw was about a yard off where Wallace would've caught it for a touchdown but the fact that the throw was made and nearly successful was still unpleasant. Look here: 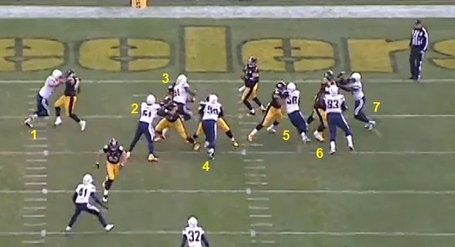 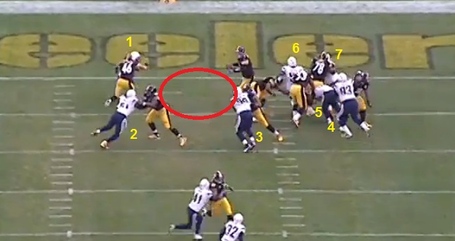 A big base to throw from, and Johnson, somehow, hasn't beaten the fullback, and Spikes should have done a stunt with Franklin to get the protection mixed up. Credit to the Steelers, the line picked up the blitz one on one across the board perfectly, and the results could have been disastrous. Still, A house blitz is a risk and when you take that risk, well you need to execute better. It's my only gripe about this team's blitzes. It's much easier when it's the standard 4 man rush with a nickel/safety blitz and an inside linebacker up the middle to take away backside protection. Of course, I think John Pagano wanted to get close to a safety or a risky punt on this one so he called for a 4 man coverage unit to defend. Success is success I guess...One more thing. I really didn't like the "greased pig" routine. Ben escaped about 4 other sacks and I thought the defense would have prepared better than they did...

Did you see some of the odd formations? No? That's why I'm here. Strange call too, seeing as they were down a linemen, but take out a linebacker. Look: They did it four times, playing in a 3-3-5: three on the series leading to that 4th down stop. I like the 3-3-5 because it gives you a strong secondary while leaving 3 down linemen who can play the pass and the run well. 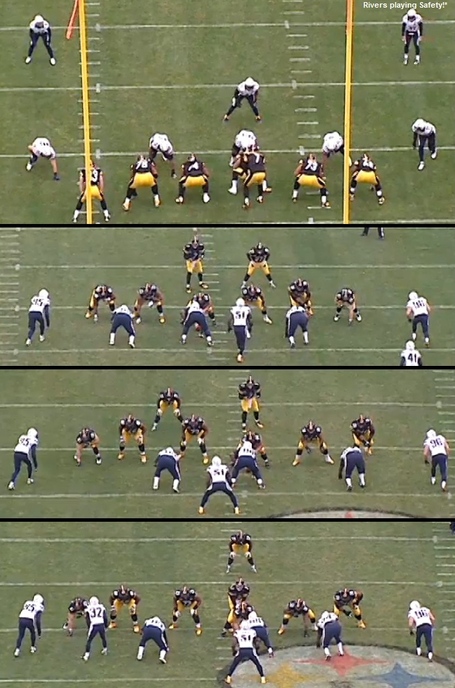 They also ran just six plays out of the dime package (not including the final drive, since I don't grade or count 'garbage time' plays). The Chargers played out of the standard 3-4 alignment just once in the second half, the very first play. After that it was pure nickel, which is also why the Steelers ran the ball better in the second half, they had 5 linemen to the Chargers two. There were also only 8 blitzes called this game.

I hope Donald Butler can stay healthy in the future. The run defense is much different with him, as Demorrio Williams excels in a backup role more than as a starter. I also like the defense more without Vaughn Martin. We got to see how much better they are with Cam Thomas and Kendall Reyes. Martin should be used only for those 15 snaps a game where someone needs a rest. This is the third game where Martin playing less has resulted in a more impressive defensive front. Now it's just time to see Shaun Phillips get 20 of his snaps taken away by English and Ingram. When that happens, it might be enough to improve the pass rush to where they can also be a top 10 unit, instead of just the run defense. That's all for today. Leave your questions and comments below!