Norv Turner and the San Diego Chargers went into Pittsburgh this week with an 0-and-14 record in the regular season against the Steelers in their home. Norv Turner seemingly outcoached Mike Tomlin and led the Chargers to victory. Was it enough to change your opinion of the beleaguered coach?

Kevin Acee has sources inside the Chargers organization that says both Norv Turner and A.J. Smith are out at the end of this season. You'd think with such low morale at Chargers park, the team would have packed it all up and laid a stinker on Heinz Field.

What happened instead? The Chargers went into Pittsburgh and won a game during the regular season. It hadn't happened in any of the 14 previous tries, but Norv Turner and his coaching staff was able to out-coach Mike Tomlin's Steelers and seal a rather decisive victory.

Though, it did take until halfway through the 3rd quarter for the Chargers' offense to finally score a touchdown. By that time, it had been nearly 8 full quarters since the offense had scored a touchdown; a touchdown drought we as fans had never seen in the Norv Turner (or Philip Rivers) era.

Should Norv Turner lead the team to an 8-8 record, he would have presided over 6 consecutive non-losing seasons. Has an NFL coach ever been fired by team when he's never had a losing season with that team?

Also, should Norv lead the team to 8-8, miss the playoffs, and get fired anyway, it'd be the ultimate troll job a head coach could do to a team. As he leaves Chargers park, I could just see him heading out the door, turn around and shout back, "enjoy your insignificant draft positioning, bitches!" Then he flips down his aviator sunglasses, gets in his convertible and peels out of the parking lot, throwing his playbook out the top of the car as he flies up Murphy Canyon Road. Wait, that would be awesome.

Okay, tangent aside, how do you feel about Norv Turner as a head coach now? Has this one game erased all bad feelings you may have had? Does it reinforce all the good feelings you had? Tell us in the poll and comments below! 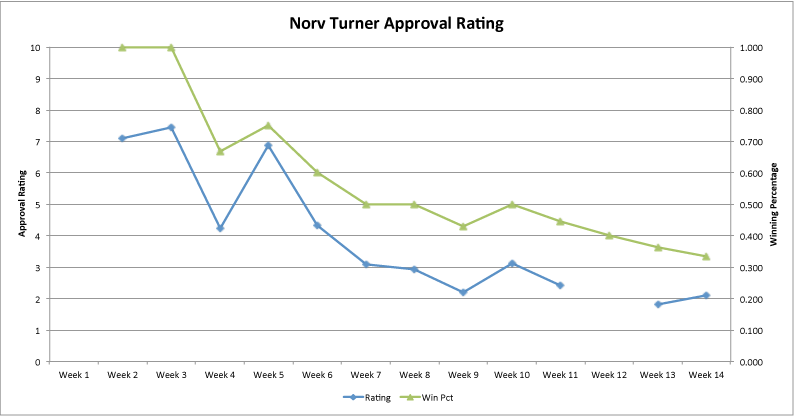