The Chargers easily handled the Pittsburgh Steelers this past Sunday, winning their first ever regular season game in Pittsburgh (it only took 15 tries to finally do it). Several mid-season pickups had key contributions in this game. Has A.J. Smith finally put together a winning team?

The San Diego Chargers still have a glimmer of hope to make the playoffs. As slim as it may be, that hope is still there. It's a little late though to make a playoff run at this point. With just 3 games remaining in the season, the worst possible outcome for the Chargers would be to win out, miss the playoffs, finish the season at 8-8 and end up with a mid-round draft positioning. So they don't get the benefit of playing in the playoffs and their draft picks are seriously devalued for no benefit whatsoever in the end.

That notwithstanding, it sure was fun watching our team stick it to the Steelers on their home turf. I even tweeted as such.

Forget draft positioning, this is fun.

See? I did say that. And I stand by it. Do I want the team to lose out from here? While it's never fun to see your favorite team lose at all, I know that it'll help the team drastically in the long run. My worry is that the team is just good enough to beat their remaining 3 opponents (whom are not very good): Panthers, Jets and Raiders. And barring a 2008-esque miracle, the team would end up at 8-8 and sitting out of the playoffs.

Rant aside, A.J. Smith has demonstrated he's good at two things, if nothing else: finding talent in undrafted rookies, and mid-season pickups that contribute right away. Has the team shown enough flashes of talent to warrant keeping A.J. Smith around at the end of the season? Or do we continue chiseling out his headstone? Tell us what you think in the poll and comments below. 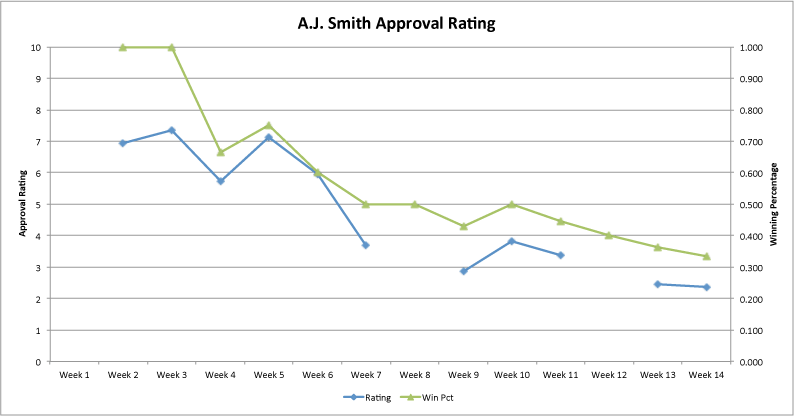