Ahhh, that win by the San Diego Chargers was great. So, where's that been?

It only took 12 games, plus 4 preseason games, and a full training camp, but the Chargers finally showed what they could have been - with the right off season moves, some injury luck, and a coaching staff that wasn't trying to jam square pegs into round holes.

But let's not ruin this post-beatdown cigarette just yet...

The Chargers played mostly dominant football in the 2nd half, and managed to put the game away without much worry!

The Chargers defeated an "elite" QB (albeit one returning from injury)!

The Chargers are trying to save... er, um, uh onto the grades!

Wow, Philip Rivers played something resembling a great game. The completion percentage wasn't great (21/41), and the YPA was a fairly lousy 4.87. But there are two other numbers I'm most interested in, and those numbers are 3 (as in TD passes), and 0 (as in turnovers). That's right everyone, finally, a clean game from Rivers! That's not to say there weren't some bad decisions - an early game throw that should have been an INT to Steelers' DE Ziggy Hood comes immediately to mind. There were also some plays where Rivers jettisoned the ball, feeling pressure that wasn't there (some missed intermediate and deep throws outside the numbers are glaring examples). But it's also true that for the vast portion of the game, Rivers took what the defense gave him, avoided mistakes, and protected the football.

No explosive plays again, but also no major mistakes. The sledding was tough for Ryan Mathews, gaining only 65 yards on 25 carries for only 2.6 YPC. Still, the fact remains Mathews did a lot of hard nosed running and delivered some punishment to the Steelers' defenders. Mathews was also taken out of the pass game, both by the Steelers' determination to slow down the Chargers' screen game, and because the coaching staff doesn't trust Mathews on RB routes. Brown fared better with limited opportunities; his 17 yard draw run was a key hidden play (see below). As a group, the running backs collected only 1 catch (Brown) on 6 targets for a total of 7 yards. In pass protection the group was terrific across the board.

After a couple of early drops, WR Danario Alexander played like a man possessed. He was the Chargers' most targeted receiver (11), and came down tied with the most receptions (7) for 88 yards and a pair of great TDs - one on a nice stop-and-go, the other a marvelous fade-stop in the endzone. As good as he was, the most valuable WR might have been Micheal Spurlock, who reeled in 7 catches for 64 yards (on 7 targets), 6 of which resulted in 1st downs (5 were 3rd down conversions). Otherwise, the plays were few. WR Malcom Floyd finished with only 10 yards on 3 receptions (8 targets), one of which was a nice 3 yard TD catch of a Rivers' fade. TE Antonio Gates also had a quiet afternoon, with only 3 catches for 31 yards (8 targets) - though one was a classic one-handed Gates' stab, and all 3 resulted in a 1st down.

Considering the ramshackle state of the offensive line, and the opponent, this goes in as the single most improbable result of the season. As a group the run blocking ranged from decent to below average, especially on off-tackle and counter plays (LG Hadnot is a serious liability here), but was slightly better on man-man run plays and zone runs, which worked well earlier in the season. LT Kevin Haslam and RT Reggie Wells also showed slightly more athleticism on the zone running plays, getting past the initial defender a few times. In pass protection, the unit was very good, allowing only a handful of pressures and no sacks - the one sack credited to Hood was on a Rivers rollout. Of course, it's about time Norv committed to the running game and short passing game to help the line out a bit.

Guess what? No Vaughn Martin means more time for Kendall Reyes at DE, which meant that the Steelers couldn't run the ball at all. Reyes, DTs Aubrayo Franklin and Cam Thomas were sensational against their Pittsburgh counterparts, frequently getting backwards push and forcing un-nimble RB Jonathan Dwyer to dance in the backfield, resulting in negligible gains. It was Franklin and Thomas on back to back plays that resulted in the Chargers' 4 down stand in the 2nd quarter with great stops on 3rd and 4th and 1. Reyes, Franklin, and Thomas also got great push on pass plays, opening blitz lanes for the LBs frequently. At the risk of overhyping what has already been one of the few rays of light for the Chargers this season, DE Corey Liuget had another terrific game,getting a sack on Steelers' QB Ben Roethlisberger, and deflecting 2 passes.

The play that broke the Steelers' back was a Roethlisbeger lateral that turned into a fumble recovery for a Chargers' TD. That play was made by OLB Jarrett Johnson, who blew up rookie TE David Paulson's WR screen blocking and forced him backwards into the lateral.Beyond that play, there was quite a bit of good coverage by Johnson, and ILBs Demorrio Williams and Bront Bird in the short to intermediate zones. Bird came away with a marvelous INT in the 4th quarter that sealed the game for the Chargers, not allowing himself to be manipulated by Roethlisberger and staying in his zone. Otherwise, OLBs Melvin Ingram, Larry English and Shaun Phillips couldn't close the deal on several QB sacks, with Roethlisberger sliding up and around the pocket.

This was a bad matchup game for Chargers' CB Quentin Jammer (against Steelers' WR Mike Wallace) and it showed, with Wallace picking up 7 catches for 112 yards and 2 TDs (though one of the TDs and a few catches came in garbage time against a soft zone) and it could have been worse had Wallace held on to a couple of big plays downfield. Jammer, however, helped atone to some degree by recovering the biffed lateral in the endzone for a TD. SS Corey Lynch continues to provide good heady play in zone and man coverage, not allowing the big plays that Atari Bigby did by biting hard on play fakes, with the trade-off being poorer angles taken to the ball carrier and less big hitting (or bouncing off, in many Bigby instances). FS Eric Weddle was not a major factor in the game, although he dislodged an otherwise likely big play from Steelers' WR Antonio Brown, and helped Jammer save a TD against Wallace on a play that could have drawn DPI. Aside from an illegal contact penalty, CB Antoine Cason had a solid game, and CB Marcus Gilchrist picked up a sack on Roethlisberger.

Let's see... PK Nick Novak converted FGs of 51 and 39 yards at the toughest kicking venue in the NFL, P Mike Scifres' drops 5 of his 7 punts inside the Steelers' 20 without any touchbacks (and helps the Chargers win the early field-position battle), Weddle executes a terrific fake punt to stem any possibility of a Pittsburgh comeback, coverage units are solid across the board, and Spurlock even contributes a few nice kick returns. A terrific day for Special Teams Coach Rich Bisaccia and his unit.

I'd love to give Norv Turner and John Pagano full credit for an outstanding game plan, but as other writers at BFTB have pointed out repeatedly - the changes made for this game due to injury or necessity are changes that should have been made several games ago. That said, the game plans were terrific; Norv's decision to run Mathews and stay in 3rd and manageable allowed Rivers to utilize the short passing game, and the limited use of 5-7 step drops and slow developing play action limited Rivers exposure to big hits. I would love to know where this game plan was earlier in the season, when it might have saved or won 3-4 games. I really liked Pagano's use of the zone blitz in the game - as it seemed to really confuse Pittsburgh's offensive line.

Last, I loved Norv's call to go with the fake punt in the 3rd quarter. With the Chargers just having given up a long TD to Wallace, and gone 3-and-out, the fake punt halted any momentum that might have been building for a Steelers' comeback.

The Steelers are not showing a big rush; in fact, only 6 men are near the Line Of Scrimmage (LOS). The Chargers have a clear 2 man advantage here, not counting Scifres. Offscreen, the Steelers' have 2 men for each of the Chargers' single gunners. It's pretty evident that the Steelers' film shows their outside blockers aren't paying attention to the LOS. 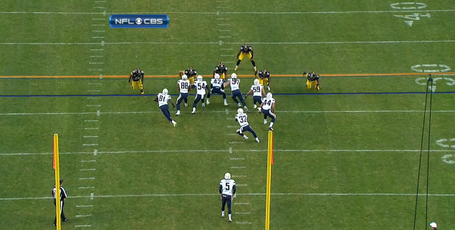 At the snap, Weddle is already moving left, towards the far side. McMichael will have the key block on Steelers' LB Stevenson Sylvester. Notice also OLB Melvin Ingram as he drops back to help either TE Dante Rosario against TE David Paulson or LS Kyle Nelson against RB Will Johnson. 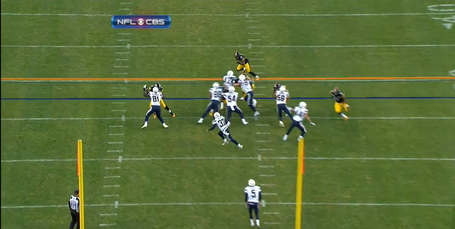 As nice as the play is, check out Ingram and Rosario. I'm wondering if one of them was supposed to peel off and lead for Weddle though the hole to McMichael's right. If someone leads Weddle though that hole, this play goes for huge yardage. Either way, McMichael has Sylvester locked up, and Weddle only has to beat S Robert Golden to the edge. 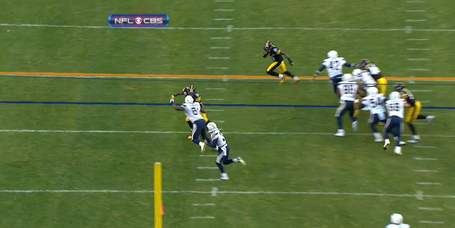 McMichael sustains his block not only long enough for Weddle to get clear, but to also hold Golden for a split second. That split second makes all the difference. Golden doesn't reach Weddle until Weddle's already made the sticks.

Seeing the kids continue to get playing time, and Norv doing the things he should have been doing long ago now that it doesn't make any difference.