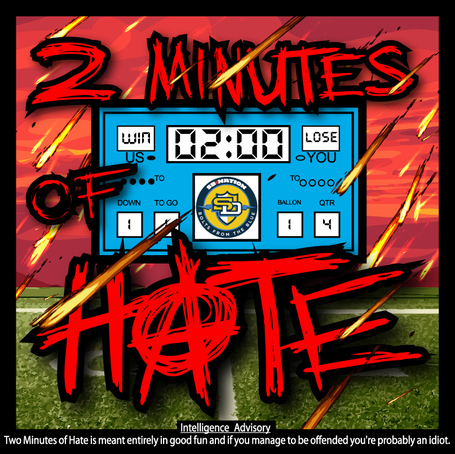 There was a great episode of 3rd Rock From The Sun where John Lithgow was dressed as a pirate for Halloween and someone asked him where his buccaneers were. "They're under my buckin' hat," he replied indignantly. Yeah, that happened. Carry on.

Tampa, as most of you know, is just a terrible, generally worthless city that's a good half hour away from anywhere you'd actually want to live. Think Detroit with better weather (excepting the potential for hurricanes, I suppose), less crime and more strip clubs1. Presumably this is why their sports teams choose to associate with the bay instead of the city. It's an understandable decision.

The Buccaneers are primarily known for one thing: being terrible at football. Granted right now they sit at .500 and are the favorites over our lowly Chargers on Sunday, but historically they are the worst franchise in the NFL. They have a sub-.400 winning percentage making them the worst franchise in a division in which not one team has an all-time record approaching .5002. That's an impressive tradition and we can only hope they get back to honoring it sooner than later.

But why would we wish bad things on such a long suffering fan base? Yes, they've actually suffered more than we have. The Chargers, for all of their many, many faults, actually have a winning record all-time. I'm glad you asked.

This brings us to the other big thing the Bucs had long been known for: those tremendously hideous creamsicle uniforms. Bring them back! The current unis are boring and stupid. The old ones were brilliantly awful. Bring them back! I hope you guys seriously never win another game unless you're wearing throwbacks. (deep breath) Seriously, though, they're excellent and I miss them.

The other noteworthy thing about the Bucs is that stupid cannon they fire in the stadium after big plays. I especially enjoy it when they're losing. It's right up there with that ridiculous horn they blow in Minnesota. When you're down three scores and that thing goes off it's embarrassing. Please keep doing it because as previously noted I hate you guys for not bringing back the creamsicle uniforms.

I'd be remiss if I didn't also address the fact that Mike Alstott regularly won awards and made the Pro Bowl as a fullback when in reality he was a runningback and not even a good one. He managed some semi-impressive counting stats on occasion, but they were largely garbage yards and vulture touchdowns. In addition to being a subpar runner, he was also a really poor receiver. About the only thing he was good at was being well liked by the media (largely because he was white). He was the prototypical blue collar, fan favorite, insert other cliché that just means overrated white guy.

Also, I have to add that I'm willing to forgive Jon Gruden for leading the Bucs to a Super Bowl win because in the process he ruined the franchise for years afterward. Sadly, they appear to have turned things around. Maybe if we're lucky they can give up a couple firsts, seconds, $8 million dollars and Greg Schiano for a guy to come in, have one good year and then nuke the franchise again because that was spectacular. Hopefully this time they won't win anything of consequence in that first year.

2. Believe it or not, but the Carolina Panthers own the best record in the NFC South. Crazy, right? Right.