The Chargers handily beat up the Chiefs on Thursday. Does A.J. Smith get credit for the win?

I'm going to get the tired joke out the way in the first sentence: why can't we play the Chiefs every week? Had your laugh? Good.

One of the most obvious glaring holes in the 2011 Chargers was the lack of a stout defense. Chargers General Manager A.J. Smith knew this and did his best to address the issues on Defense through the draft and Free Agent pickups. It seems to be paying off, at least against the Chiefs.

With Richard Goodman going on Injured-Reserve, the Chargers had a hole open at Wide Receiver. A.J. wasted no time in signing former-Charger, fan favorite and Ryan Mathews' former roommate Seyi Ajirotutu. Three days later, Seyi would convert a crucial 3rd down on the Chargers' game-opening TD drive. I bet Rivers enjoyed having another familiar face on the squad, even if Seyi was only targeted once.

At any rate, you guys were not too kind on A.J. last week following the Browns loss: you gave A.J. the worst rating of the year, and over a third of you voted to fire him on the spot, and 62% of you voted to replace him (rating him as 1 or 2). Will things be a bit kinder this week? 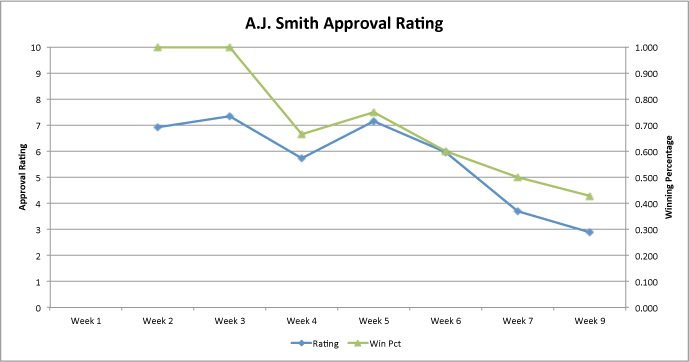