Norv saves his job with a blowout win against a desperate Kansas City team! Oh, wait... that is, the Chargers try like happy hell to give away a game that Kansas City wants less than Romeo Crennel's, Scott Pioli's, and Matt Cassel's job security. Still, 4-4 is better than 1-7.

After 8 games this season, we know what the Chargers are a not good, potentially mediocre team that can sneak into the postseason a) because the AFC sucks, and b) because of an incredibly soft schedule.

We know Philip Rivers is no longer an elite QB (hell, I'm not sure he's even a top-16 QB right now).

We know this team has ginormous problems rushing the passer and covering the receivers (what's new?).

We know this team's free agent signings, save possibly for Ronnie Brown, are not unqualified successes.

But, and this is a big but... this Chargers team is 4-4, and at the moment very much alive in the playoff chase. So no matter how much we want to dismiss them, we can't (not until 2 Sundays from now when they've played at Denver).

It's also very possible Thursday night's victory was the last dying ember of a one-time contender. With that pleasant thought, let's get on with the grades.

Really, aside from that one egregiously bad mistake at the end of the 1st half, Rivers was awesome on Thursday night. Completing 90% of your passes is awesome, averaging 11 yards per attempt is awesome, and averaging a TD every 10 passes is awesome. Accuracy was marvelous; in almost every case Rivers put the ball in a place where a) the defender had no play on the ball, and b) the receiver had a chance to run after the catch. Decision making was phenomenally improved, to the point of seeing Rivers throw balls away, and seeing Rivers take a sack when nothing was open downfield. Rivers also seemed to show more trust and confidence in the pocket, to the point where it's actually possible to clearly judge the offensive line's performance.

Aside from Ryan Mathews' 31 yard run, there were no explosive plays from the RB position. That said, there were also no mistakes made. I'd also say that 13 rushes (for 67 yards) is not enough for Mathews, especially when he's averaging 5+ yards per carry. It should also be noted - in response to Brown's being on the field in passing situations - that Mathews did a nice job of helping to chip on Chiefs DE/OLB Tamba Hali in the 3rd quarter. As much as I want Mathews on the field, however, Ronnie Brown is becoming a really nice change of pace option, with 6 carries for 38 yards and another 5 catches for 35 yards. As a group the backs combined for 123 yards on 26 carries and a healthy 4.7 yard average.

This was about as perfect a game as a group of receivers can play. No dropped passes, no tipped passes, no missed reads, several tough catches, runs after the catch... everything you'd want was there. Even more amazingly, this happened with WRs Robert Meachem and Eddie Royal on the sideline (or maybe because they were on the sideline). Malcom Floyd brought in 4 receptions for 48 yards and a nice back shoulder TD catch. WR Danario Alexander added 3 catches for 61 yards, the longest being a 30 yard catch-and-run. WR Seyi Ajirotutu made a terrific diving catch for 29 yards on the game's opening TD drive. TE Antonio Gates abused Chiefs' SS Eric Berry in single coverage (again - Romeo, he can't cover Gates!) on the opening drive with 2 catches for 35 yards and a TD (finishing with 3 catches for 41 yards overall).

If not for the struggles of... LT Jared Gaither, this unit would have earned an A. Gaither is clearly struggling to recover from the groin injury sustained against New Orleans - he really had a hard time containing Tamba Hali, who repeatedly attacked with speed rushes, and accounted for the Chiefs' only sack (a coverage sack off slow developing play-action). Otherwise, the offensive line played pretty well. For whatever other problems he has with other players, RT Jeromey Clary owns Chiefs' OLB Justin Houston, while the interior of the line did a nice job handling DTs Glenn Dorsey and Dontari Poe. In rushing, the Chargers ran marginally better to the right than the left, but the most effective runs came on draw plays to Brown and 4 straight zone runs to end the 3rd quarter / begin the 4th quarter that included the biggest single play gains from Mathews and Battle.

The Chiefs paid DE Corey Liuget the ultimate compliment on Thursday night - they ran away from him when he was lined up at RDE. Liuget is getting better at rushing the passer, he had a couple of hurries when blocked man-to-man. Furthermore, the Chiefs attacked LDE Vaughn Martin relentlessly whenever he was in the game, deciding that attacking DT Aubrayo Franklin and Liuget was a losing proposition. As for the second string... not so good. DT Antonio Garay looked like he hadn't played all season - he was regularly blown backwards by the Chiefs' interior linemen. DE Kendall Reyes and DT Cam Thomas also struggled on run defense, but Reyes did a nice job pushing the pocket in the 4th quarter with the Chiefs in passing mode.

Really, outside of OLB Jarrett Johnson's game killing sack, and the exceptional play of ILB Donald Butler, there was a whole lot of meh from this group. OLB Melvin Ingram is starting to make plays that make it impossible to keep him off the field - OLB Antwan Barnes (and Johnson on run downs) keep taking his snaps - but when Ingram is making hustle plays (like a stuff of Chiefs RB Peyton Hillis that helps stop a drive) he's the guy who should be on the field. Meanwhile, Butler is reaching the point where he's simply reacting to what he sees, and his speed and hitting ability are awesome. His forced fumble against Chiefs WR Dwayne Bowe, his 3rd and 1 stop on Hillis, plus the hard clean hit he put on RB Jamaal Charles were terrific. At the other inside spot, ILB Demorrio Williams needs to start getting more plays ahead of ILB Takeo Spikes. He's simply more athletic, and better in pass coverage. As a group, the LBs contributed 18 tackles.

It didn't matter which side Chiefs' WR Dwayne Bowe played on, no one could cover him, although of the 2 CBs, Jammer had a better game. On the other side, Antoine Cason continues to be the easy target, either because he refuses to play press, or the coaches won't allow him to play press. It's a problem that costs the Chargers opportunities for sacks because the opposing QB knows where to go with the ball when he sees the blitz. For the Safeties, Weddle had another solid game, barely missing an INT and strip sack in the 1st half. SS Atari Bigby needs to quit crash tackles and start wrapping up ball carriers; he missed a couple of tackles that could have been costly without extra help. All told, the DBs contributed 26 total tackles.

Really, there were very few opportunities for the Special Teams to do anything, as both offenses held the ball for long drives. That said, PK Nick Novak did convert his 1 FG attempt, and P Mike Scifres dropped another punt inside the 10 yard line, thanks to a terrific catch by Darrell Stuckey. Stuckey also recovered a muffed punt in garbage time. As usual, the coverage units played well, but nothing spectacular, save for one of Bigby's (now routine) crash tackles.

Here's a few things I really liked about the way Norv Turner called the game on Thursday. He stayed away from Chiefs' CB Brandon Flowers. With CB Stanford Routt injured, slot and reserve CBs Javier Arenas and Travis Daniels were repeatedly picked on. Given Rivers' problems with forcing the ball, it was a good decision that both reduced the possibility of a game killing mistake, and allowed different players to contribute by being moved around. Secondly, Chiefs' Head Coach Romeo Crennel was dumb enough to leave Berry man-to-man against Gates again, and Turner wasted little time attacking. Thirdly, Norv is starting to use his tendencies against the opponent (see One Big Play below). One other thing... can we get some more zone runs?!

On defense, John Pagano was certainly aggressive, blitzing regularly and mixing up his defensive fronts. Cassel actually did well to escape 2-3 sacks - one of which by Eric Weddle almost caused a fumble early in the game. However, the continued off-play by Cason gives opposing QBs an easy out against the blitz. The coaches are going to have to either give help to the deep have behind Cason so he can play aggressive, or simply hope he doesn't get burned.

That said, if there's one starting DB who should clearly be expendable on KR and PR duties, isn't it Cason? If Norv's willing to bench Mathews for fumbles, shouldn't Weddle be benched from Special Teams for the same? 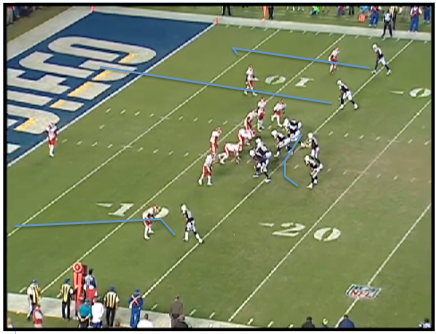 1st and 10 on the Chiefs' 13, 11:37 left in the game. Here the Chargers are in 11 personnel, strong right. Floyd at the bottom, Ajirotutu in the slot, and Alexander at the top. As the play develops, it's something like 996 H check. Check means Mathews will stay in the pocket and check for blitzers, then release in front of Rivers. Note that there's no Slot call for Gates - he's blocking. 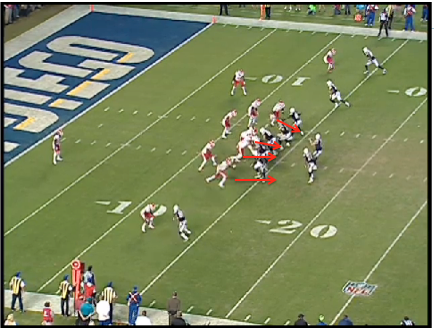 As the ball is snapped, this is a 4 man rush. However, what you see is man-to-man for Floyd, Ajirotutu, and Alexander, with a single high safety (Kendrick Lewis) shaded towards Floyd's side. 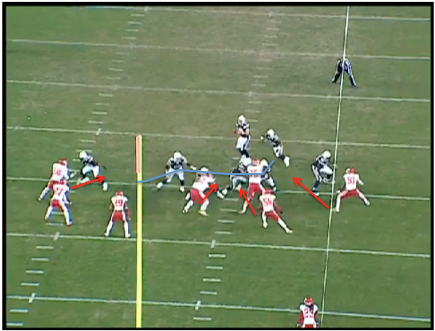 Here's the endzone view, with Mathews starting to cut in front of Rivers - like the draw play you'd expect with Mathews in the game - even though there's no pulling guard or play fake to simulate the draw. 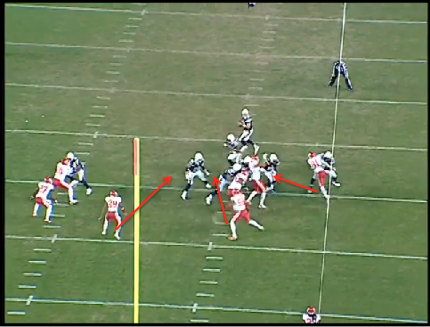 Check out how hard Tamba Hali dives inside, and look at Eric Berry and Derrick Johnson reacting inside to Mathews' action. They're biting not on an actual play-fake, but a tendency that Norv has set-up: When Mathews is in the game, it's usually a run. Also, note that 2 Chiefs defenders are taken out of the play by the bracket coverage of Gates (OLB Justin Houston and S Abram Elam). 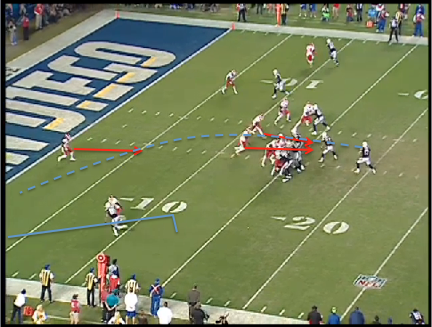 In this picture, Hali dives so far inside that he gets lost in the mass, and conveniently takes himself out of the throwing lane. Lewis, Johnson, and Berry are still looking towards the backfield, even as Floyd sprints for the corner of the end zone. Lastly, a matter of timing. This ball is coming out on time - Rivers has planted the back foot and there's no pressure.

Antoine Cason's continuing struggles in pass coverage - otherwise known as Vincent's Revenge. Or, the possible sixth season of The Day After... Norv Lives!