The Chargers hosted the Ravens in a battle of defenses. One significant play cast a mighty shadow over a great game by the powder blue squad that summed up the season's struggle and merciless end simultaneously.

4th and 29 almost prevented me from writing this article. That's how disappointed I was. Only one of the 4 pass rushers even tried to get pressure and he was doubled teamed. WHY? If you just stand at the line of scrimmage and let the QB throw, something is bound to happen. Why not blitz 6? Have 3 deep at the first down and two intermediate defenders. Rush three and have an extra guy in coverage. That's what usually happens on 4th and game. Why take such bad angles? You think a player is going to give up, so you decide to as well? After that play, I stopped watching the game and assumed the Chargers lost. They got to overtime, yes, but did I expect them to win in the 5th quarter? I did before Randy McMichael dropped a pass. Lets get on with this.

Welcome back, Antonio Garay. He didn't rush that often, but when he did, he made things happen. He didn't get sacks but he got in Flacco's face and hit him a few times and that gets quarterbacks scared. He was solid against the run and hopefully is back to 100% and can continue giving interior lineman a hard time. Corey Liuget is a regular here. His dominance is one of the few bright spots on the team. He can rush the QB and he can stop the run as well as any lineman on the team and even when teams avoid him, he chases the play down, never giving up. It's what I like to see. Kendall Reyes is so far showing he can handle 40 snaps a game and be a difference maker. He didn't get any sacks but he had a pass batted at the line of scrimmage and got pressure a few times, even drawing double teams as a sign that he's being respected. He is the future for DE across from Liuget and these two will be a force for the next few years and can be the anchors in a top ten defense. And now, drum roll.... for the first time all year: Vaughn Martin! Yes, the living, breathing blocking sled finally showed up for a game. While he didn't contribute much to the pass rush, he was (with the exception of 3 plays) very good against the run. He played more snaps than I would like, but he stayed strong all game.

Shaun Phillips once again. I know, he got a sack. But those of you who have game rewind, or watch the games very closely.... did he get any pressure the other 30 times he rushed Flacco? No. No, he didn't. And while sacks are nice, it's better to rush 30 times and get a hit or pressure on the quarterback 5 times than 1 sack and nothing else all game. Pressure is what leads to hurried throws, which result in interceptions and incompletions. And let's look beyond that. What about his run defense? He was run over all game. All...Game... crushed on every run his way. It was awful. Besides him, Takeo Spikes and Demorrio Williams were terrible at stopping the run. Overpowered by linemen and the fullback, they couldn't get any stops. It's a different run defense without Donald Butler, and we'll see how they stack up with Jonas Mouton and Andrew Gachkar to help them. Also, 4th and 29. That was bad. Very bad. 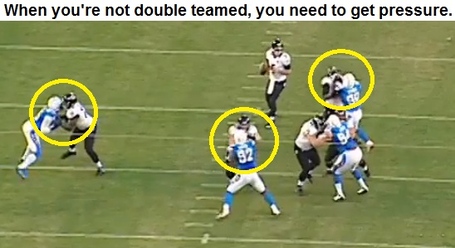 I've grown tired of seeing players not win one on one matchups enough (see insert of Liuget doubled and everyone but Barnes presenting a threat to Flacco). Vaughn Martin and Shaun Phillips are two players who struggle with this. It's disappointing to see the best rusher doubled and no one else who's a threat. Maybe the pass rush package on 3rd down should be Ingram, Barnes, Liuget and Reyes with Thomas as a sub in for either lineman. If I'm the offense I might leave 6 in pass pro instead of 5 against that 4 man rush because it's more dangerous.

I'm excited to see both young defensive ends having so much success. If they can keep it up and Garay is really back to his old self, the front 3 will be a terror for opposing teams. I'm glad Antwaan Barnes played well. He should take about 20 snaps from Shaun Phillips asap. Jarret Johnson was probably let go because he's finished, as he's only been impressive on a limited basis this year. Atari Bigby will no longer be around to give up big passes to the right side of the field, and Marcus Gilchrist really needs to be used as a blitzer or outside corner.

I'm excited to see how Jonas Mouton and Brandon Taylor will look with significant playing time, and if Phillips can get anything done this year because it should be his last if he can't produce. He's been awful all year. I'm aware the 4th and 29 was a crappy call that should've been 5th and 1 but come on, the epic fail by the first 3 guys with a chance to make a stop was a sign of incompetence I couldn't forgive even if the Chargers took over on downs and won.