Week 12 Chargers Grades: How to Lose to the Baltimore Ravens

4th and 29... game on the line. The Chargers have done what they've had to do all season to come through in big spots. Sunday was no different, in fact, it was an astonishing show of will and determination. Let's just face it, folks... no team finds ways to lose like the 2012 Chargers.

Share All sharing options for: Week 12 Chargers Grades: How to Lose to the Baltimore Ravens

In seriousness, I can make a reasonable argument this Chargers team is about 6 plays away from being tied for the best record in the AFC. Here are the Big 6, in my opinion:

These 6 plays are chief among the reasons Norv Turner and A.J. Smith will likely be fired. And while that seems unfair at first blush, these are their draft picks, their free agents, their plays, their game decisions. Either the players don't know how to make these plays, or the coaches cant get them to make these plays (likely quite a bit of both).
The Chargers are not a great team, as no great team would leave itself at the mercy of so many pivotal moments. However, the Chargers are not an awful team, as an awful team wouldn't even have this many opportunities. But these plays are the certainly the difference between "good" teams and "bad" teams.
The simple truth is what Roy McAvoy once said about defining moments: "You define the moment, or the moment defines you." It's pretty clear this season the moment defines the Chargers as a team that doesn't know how to make game-winning plays.
But they didn't quit, right?

For the 1st time since the Oakland Raiders game, Philip Rivers didn't make any egregious mistakes. He protected the football by (mostly) not throwing dumb passes, getting rid of the ball on busted plays, and eating the ball when protection broke down - which was often. Rivers numbers were pretty pedestrian, with 228 yards on 36 attempts (a poor 6.3 YPA), but much of those throws were the result of checkdowns. The TD pass to WR Malcom Floyd was a thing of beauty, a classic Bang 8 (i.e. skinny post made famous by John Jefferson and Michael Irvin) laser - and evidence that Rivers' arm strength is not the issue many think it is. Rivers' grade is not higher because it's not enough for a QB of his ability to simply avoid mistakes.

Much the same as Rivers. No serious mistakes, but no big plays either. Ryan Mathews totaled 22 touches (19 carries, 3 receptions) for 88 yards. Ronnie Brown and Jackie Battle combined for another 51 yards on 10 total touches. The longest play between the 3 backs was 13 yards. For the 2nd or 3rd week running, Mathews was the better player in pass protection - the 2nd sack on Rivers was a result of Brown not picking up a late blitz from Ravens' LB Dannell Ellerbe. I think it's really time to just give Mathews 25-30 touches a game, ignore the fumbling issues, and find out for sure whether he's the right RB for the Chargers going forward.

WR Danario Alexander had another solid game, contributed 5 receptions for 74 yards, but the shine came off the apple a bit with 2 penalties that hurt early drives and a couple of critical dropped passes in OT. Floyd continues to be Mr. Reliable, with 4 catches for 65 yards and the TD. WR Seyi Ajirotutu also had a pair of catches for 17 yards, one of which was a nice diving reception for a 1st down. On the other hand, the TEs were virtually nonexistent. Antonio Gates and Randy McMichael combined for 4 catches for 24 yards. WR Robert Meachem was a glorified and very expensive cheerleader.

The truth is 3/5ths of this Offensive Line is not NFL starting quality, and it showed as the O Line gave up 5 of the 6 sacks, and a handful of other pressures. Every lineman except for C Nick Hardwick was guilty of surrendering a sack (2, in the case of reserve G Rex Hadnot). Run blocking was somewhere between adequate and functional. Compared to the last couple weeks, LT Mike Harris was actually OK against recovering OLB Terrell Suggs, but RT Jeromey Clary struggled mightily against Ravens DE Paul Kruger. Also, DT Haloti Ngata wasn't terribly impressive against C Nick Hardwick. That said, DT Arthur Jones abused Hadnot for much of the game.

DE Corey Liuget has another terrific game, collecting a sack, deflecting a pass, and making a huge 4th-and-1 stop in the 3rd quarter. He consistently got push against the Ravens left side, so much so that Ravens generally ran away from his side. He also had a few great hustle tackles downfield. DE Kendall Reyes continues to justfy additional playing time, blowing up a 3rd and 1 running play. Dts Aubrayo Franklin and Cam Thomas were solid, if not spectacular in the middle. The only player on the line the Ravens attacked regularly was DE Vaughn Martin, and As a group, the DL contributed 16 tackles.

Both OLB Shaun Phillips and Antwan Barnes took advantage of Ravens rookie RT Kelechi Osemele for 3 sacks, while ILB Takeo Spikes and OLB Jarret Johnson combined for a sack. off a blitz against the Ravens left side. As for Spikes, he actually held up fairly well, considering his extended playing time, and Johnson, as usual, deterred teams from running his way. Surprisingly, it took the Ravens a while to realize ILB Donald Butler was injured, but they attacked his coverage assignments in the 4th quarter and OT, with passes regularly going to TE Dennis Pitta. when covered by Butler replacements Andrew Gachkar and Demorio Williams.

The 2 best games in this group belonged to CB Antoine Cason, who didn't give up any big plays, and wasn't attacked in the red zone, and FS Eric Weddle - at least until he was knocked out of the game on That Play. Beyond those two, there was lots of bending, but very little breaking. CB Marcus Gilchrist allowed a 54 yard catch and run to WR Torrey Smith to set up Baltimore's 1st FG, and CB Quentin Jammer allowed a 31 yard reception in OT to set up the Ravens' winning FG try. SS Atari Bigby was doing his usual business of trying to hit players (i.e. not tackling), and failing. After he was hurt, backup SS Corey Lynch substituted bad tackling for bad angles and missed tackles.

It took 2 weeks, and two devastating blocked punts, but appears Rich Bisaccia has gotten the punt block problems straightened out. P Mike Scifres averaged53.2 yards on 9 punts, with 4 punts dropped inside the 20 and no punts going into the end zone. PK Nick Novak converted another 2 FGs from 47 and 30 yards, and also collected 2 touchbacks on 4 kickoffs. Coverage teams were solid across the board. As usual, the only Special Teams area that is consistently disappointing is the punt and kickoff returns, which continue to contribute very little to aid a struggling offense.

This coaching staff, on defense especially, was creative again, up until the 7 minute mark of the 4th quarter. After that, they went into a prevent defense that gave up yards far too easily, didn't burn enough time off the clock, and allowed the Ravens back into the game. On offense, is there becoming a more predictable call than the draw on 2nd down and more than 5 yards? To Norv's credit, he finally started running shorter routes, but he's still reluctant to give help to the offensive line, and he still wants go down the field. Whatever. Also, I'd love to add that teams are not going to honor the play-action pass when you don't feature your best runner on a more consistent basis. Lastly, 2 passes on the final possession of the 4th quarter? 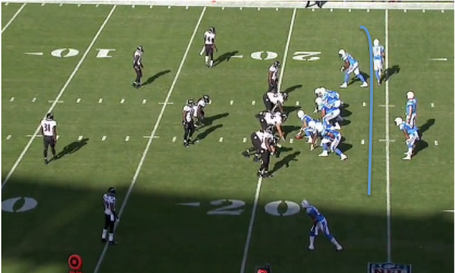 2nd down and 6 at the Ravens' 21. Chargers are in 22 personnel, strong right with Gates to the right. Rivers sends Alexander in motion, moving Gates to the slot. Ravens' SS Bernard Pollard #31 moves toward the middle of the field away from Floyd, and CB Corey Graham moves out to pick up Alexander. This appears to be a zone defense. 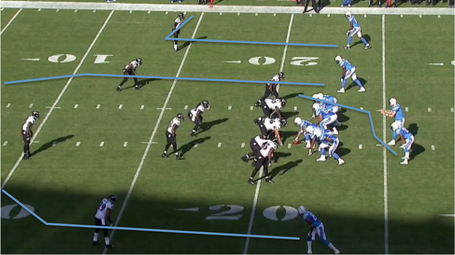 The play is something like 883 H flat, with McMichael helping on Clary's side. 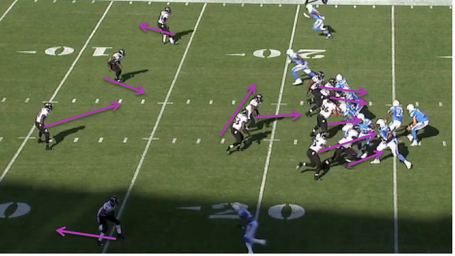 The Ravens send a 6 man blitz. ILB Dannell Ellerbe #59 blitzes late, while ILB #53 Jameel McClain moves towards the flat area to pick up Ryan Mathews. Note that the low snap nearly causes a disaster when Mathews crosses in front of Rivers. This means the Ravens are in single-high safety coverage - Graham, Ed Reed (on Gates), and Cary Williams (on Floyd) have man coverage, with Pollard the help in the middle, leaning towards Gates' side.

The line plus McMichael do a great job blocking on this play. Rivers does a brilliant job reading Pollard after the low snap, and uncorks a nice sidearm throw to avoid NT Ma'ake Kemoeatu.

Note that Floyd's 8 route (skinny post) pushes Williams off, creating space for the inside break. Pollard is late coming over from Gates' side. This is one of the classic plays in the Coryell system, and long-time Chargers' fans will remember seeing John Jefferson and Wes Chandler scoring on this play repeatedly. Dallas Cowboys' fans of the early-mid 90s will remember this play with Michael Irvin and Alvin Harper. I bet Dan Fouts and Hank Bauer had flashbacks seeing this play unfold from their announcing booths.

Head Coach and General Manager job-security discussions that aren't masturbatory fantasies. It's also time to start figuring out who should, and should not be on the roster next season.