The Chargers have begun the final implosion of the Norv Turner / A.J. Smith era, with a not-as-close-as-it-looked defeat at the hands of Peyton Manning and the Denver Broncos.

"A king has his reign, and then he dies. It's inevitable."

Luckily for Manning, he chose a team that is ready to win now, and is furthermore situated in a division with one incompetent franchise (Kansas City), one clueless franchise (Oakland), and one regressing franchise (the Chargers).

For us in San Diego, what remains now is the death rattle of Smith's Chargers. If Dean Spanos has any conviction about wanting to field a championship franchise, this past Sunday will go down as the "Last Stand Hill," or "Waterloo," (i.e. the last meaningful battle after which the losers ceased to be relevant) for A.J. Smith and Norv Turner.

Yesterday, Rivers had another pair of horrendous interceptions, in addition to another 3 strip-sack and fumbles, of which only 1 was lost. Rivers completed 60% of his throws for a pedestrian 6.45 YPA, and two TDs, one of which briefly gave the Chargers life, and the other coming on a questionable call in garbage time. We're getting more bad decisions coming from pressure either present or perceived, as well as underthrows that came from pressure that wasn't there - notably the underthrown bomb to WR Malcom Floyd, and the missed throw to WR Danario Alexander that opened the 3rd quarter. At this point, I'm thinking that as soon as the Chargers are officially eliminated from the postseason, Rivers really should be benched for his own protection.

Hard to blame any of the backs for their lack of production. In the 1st half, the offensive line didn't open many holes, and for much of the 2nd half, the Chargers were down by 2 scores. In this climate, RB Ryan Mathews rushed for only 47 yards on 15 carries, and a paltry 3.13 YPC (though in fairness, 15 carries is not enough). In limited duty and short yardage, RB Jackie Battle wasted snaps that should have gone to more productive players with -3 yards on 4 carries, while RB Ronnie Brown did very little as well, gaining 9 yards on 4 carries (Norv, teams have figured out the 2nd and long draw call when Brown's in the game). Brown and Mathews combined for 42 yards on 7 receptions, and Mathews continues to demonstrate improvement picking up the blitz.

Yes, A.J. deserves credit for sniping Danario Alexander from the refuse pile, and Alexander continues to reward him, this week putting up 7 catches for 91 yards and 2 TDs on back shoulder throws. Malcom Floyd finished with 67 yards on 4 catches, with one terrific catch on an underthrown bomb from Rivers. Beyoond the starting pair, the one bright spot was rookie TE Ladarius Green collecting 25 yards on 3 catches. Beyond those 3 players, the results were negligible, with WRs Eddie Royal and Robert Meachem combining for 10 yards on 1 catch and a combined 5 targets - and yet another misfired Rivers to Meachem deep ball. TE Antonio Gates was also largely invisible, gaining only 17 yards on 2 catches.

This is the worst Chargers' offensive line performance I've seen since Stan Humphries' last games as a starter under Kevin Gilbride. The Broncos are very good, but they're not the 1985 Bears or the 2000 Ravens. Just as soon as I'm thinking that RT Jeromey Clary is turning a corner, he gets absolutely abused by Denver OLB Von Miller, giving up 3 sacks - one of which was an uncontested free shot. LT Mike Harris allowed 1 sack to OLB/DE Elvis Dumervil, and multiple pressures throughout the game. Gs Tyronne Green and Louis Vasquez were injured early, leaving reserve LG Rex Hadnot and rookie C/G David Molk to make the plays. Needless to say, they were overmatched.

The real bright spot here was rookie DE Kendall Reyes, who got solid pressure during the game and broke through for 2 sacks on Manning. Beyond that, this group really missed starting DT Aubrayo Franklin, as the Broncos rushed for 133 yards on 25 attempts (5.3 ypc) - although the game plan was built around conceding the run and slowing down Manning. DE Corey Liuget really struggled this week with his injury, and was a negligible presence for the 1st time this season. DTs Cam Thomas, Antonio Garay and DE Vaughn Martin had little to no impact on the game.

Shaun Phillips finally made an impact play, getting a sack and Safety out of Manning that briefly brought the Chargers back within 1 score in the 3rd quarter. Beyond that play, ILB Donald Butler continued to make noise with 7 solo tackles and a forced fumble to stop a Denver drive in the 2nd quarter. Unsurprisingly, Denver took advantage of the fact that OLBs Melvin Ingram and Jarret Johnson are not good in pass coverage, as Ingram allowed Decker's TD reception in the 3rd quarter by overpursuing (see One Big Play below), and Denver TEs (Jacob Tamme and Joel Dreessen) combined for 81 yards on 8 catches.

What was notable about this game was the largely solid play from DBs Marcus Gilchrist and DB Shareece Wright, who did a solid job in coverage on Denver's WRs, except for the play following the blocked punt where Manning toasted Wright on a 31 yard TD pass to WR Brandon Stokely. Aside from the terrific TD reception by WR Demaryius Thomas, CB Antoine Cason was actually quite decent in coverage. As usual, FS Eric Weddle was mostly in the right place at the right time, especially in taking advantage of Gilchrist's deflection for a Pick 6. SS Atari Bigby reverted to form, missing some tackles while looking for knockout hits at the expense of solid tackles, and biting badly on play-action fakes.

When teams attack the exact same spot in your punt protection for the 2nd week in a row, and it results in the 2nd blocked punt within a week (Andrew Gachkar this time), it means that either the coaches aren't correcting an existing problem, or the players aren't learning from their mistakes, or both. And for the 2nd week running, the block leads directly to a game-changing TD. Beyond the crippling mistake, coverage units were solid again, with Darrell Stuckey making a nice play to set-up the Phillips safety. Scifres was a stud again, shaking off an injury and a second punt block to average 54.8 yards on the non-blocked kicks, and dropping 3 inside the Denver 20 (although he had 3 touchbacks). PK Nick Novak was not a factor, except in executing a terrific onside kick to open the 2nd half.

Coaching: F for the Offensive Coordinator, B- for everyone else.

Really Norv? That's what you've got? That was the best you could do in a game that was your last real chance to keep your job? 15 real possessions, and 13 of them end in 5 plays or less. Furthermore, the Chargers did nothing until the Broncos decided that the game was in hand and switched to clock-killing mode. No help for Clary and Harris outside, very little max protect, no unbalanced lines, very few 3 step drops, very few zone-running plays, Nothing, but a stubborn unwillingness to modify the offense in any more than a token way to help his players.

Like I said a few weeks ago, it's as if Norv is showing everyone how bad A.J. Smith's player decisions have been.

As for Head Coaching decisions, the onside kick to start the 2nd half was a terrific call, and helped set-up the safety. A good, risky call. That said, the Head Coach blew another onside opportunity following the Chargers' first offensive TD, kicking off from midfield thanks to a Denver penalty.

On the other hand, there's John Pagano, leaving no stone unturned. He threw the kitchen sink at Manning on Sunday. Blitzes coming from everywhere, more often than not. And the Chargers generally made Manning uncomfortable, limiting him to less than 60% completions, not allowing long scoring drives until late (Denver's average scoring drive was only 40.5 yards), and generally conceding the run. Holding Denver to 1-4 inside the redzone was also an accomplishment. I'd have liked to see Pagano's gameplan rewarded by an offense and Special Teams that didn't constantly put them in bad positions 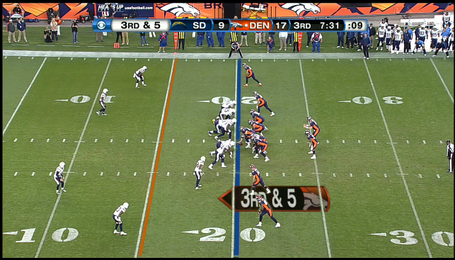 The Broncos come out in 11 formation with Thomas and Stokley to the left, then Tamme and Decker to the top. The Chargers counter with a 2-4-5 alignment, with Reyes and Liuget as the down linemen. From far to near, the LBs are Williams, Phillips, Butler, and Ingram - all showing blitz. THe DBs are in a soft shell behind them. 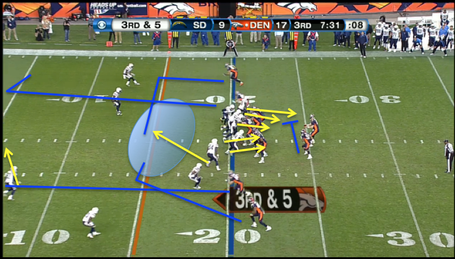 At the snap, Ingram drops out to take the short zone in the middle of the field. Gilchrist, nearest the line of scrimmage peels off Stokley in the slot, leaving him to Cason and Weddle. Bigby takes Tamme, and Wright has the outside zone on the far side. 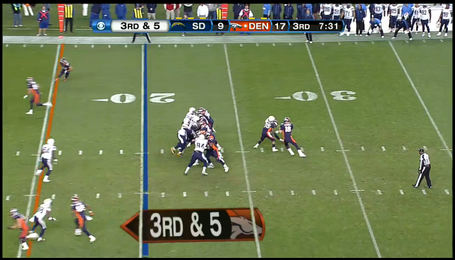 Broncos RB Lance Ball does a great job picking up Williams' blitz. However, Manning must move up to get a throwing lane. Ingram is moving towards Decker, who has cut inside along the 1st down line. 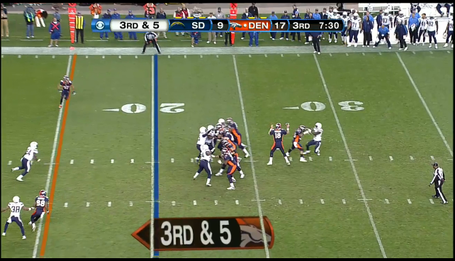 Manning sees Decker open, and raises to throw, but with Reyes and Butler in the throwing lane, he has to pull the ball down. Ingram is looking in the backfield, and sees Manning's pump. 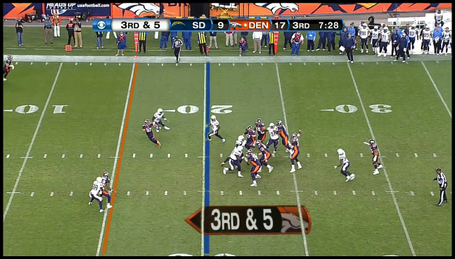 Manning pulls the ball back down, and slides left into a throwing lane. You can see how far Ingram has overrun Manning's pump. Decker has cut inside and has a clear path to the the end zone. Also notice how Gilchrist's initial good position on Thomas has now unfortunately taken him out of the play.

The effective end of the season coming against the playoff competitors of the AFC Central, and serious time devoted to identifying the core players to keep, the baggage to drop, and what looks increasingly like a new GM and Head Coaching combination.