The Chargers suffered yet another second-half collapse. Is it an issue with the players on the field? Or are the players okay and it's something else?

Another swell game that was, huh? Things actually started looking pretty good for the recently-signed WR Danario Alexander early in the game. On the first possession of the game, the Chargers were faced with 3rd-and-10 when Rivers connected with Danario Alexander — enough for a first down — and he broke two tackles to carry the ball down the field for a touchdown.

But that wasn't his only contribution in the game: Alexander finished his day with 5 receptions for 134 yards. Take out the 1 80-yard TD completion, and he still went 4-54; not terrible for a free agent signed less than two weeks ago.

Obviously, it wasn't quite enough to overcome the team's own blunders. Take out a blocked punt return and at stupid Philip Rivers pick-six interception — and assume the Tampa offense doesn't score again — and the Chargers actually win the game by 4 points.

But, those things still happened, and the Chargers still lost. How culpable is on General Manager A.J. Smith? Has he fielded a competitive team? Are the team's struggles player-related, or are other factors at play?

Last week, you guys were a little more generous with Smith's job rating. His rating seems to be moving in step with the Chargers' winning percentage. 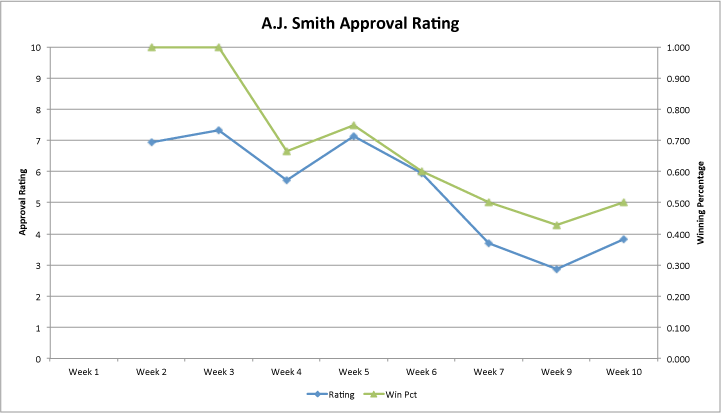