Two plays separate the Chargers from a win on the road against the Bucs. In this case, it was the Bucs who stayed patient, didn't make mistakes, and waited for the Chargers to hand over the game on a silver platter.

I think what drives me so effing crazy about this 2012 Chargers team is that every time I start to think that they're going to get the job done, they find a mind-bogglingly stupid way to give the game away.

Three mistakes, resulting in at least +17 points for Tampa Bay. The winning margin was 10. Especially damming because the defense only allowed 17 points to what had been an unstoppable Tampa Bay offense.

On some level, I'd rather this team just get hammered as they did against Atlanta, as opposed to this perpetual tease - like watching all those Bikini Car Wash movies, only to notice you're watching USA Network instead of Skinemax.

On with the grades...

Quarterback: I have no idea.

The stats say B to B minus. 29/37, 337 yards, 3 TDs, and 2 INTs, 9.1 YPA. The first three quarters were 2008-10 vintage Rivers. Accurate on short, intermediate, and deep throws. Protected the ball with decision making and ball placement. Gave receivers a chance to run after the catch. Stood tall against the blitz. But there were signs of impending doom. Rivers flat out missed a TD to TE Antonio Gates in the 2nd quarter because he threw off his back foot instead of setting his feet and making a strong throw. Then came the mistakes... missed sight adjustments, the previously mentioned pick 6, and the INT that sealed the game, another poor-mechanics throw deep left to WR Danario Alexander that ended up about 8 yards short and right of the target.

This isn't Cassel-esque bad QB play, or even Jake Delhomme-esque career crashing QB play. This is something like mid-late career Favre-esque QB play... plenty enough to keep you competitive at its best, and dumb enough to kill you at its worst. When Norv (and maybe A.J. Smith) hit the bricks in January, some of the blood will be on Rivers' hands.

The backs drew a tough assignment against Tampa Bay's run defense. And if they weren't spectacular, they were efficient, totaling 131 yards on 34 combined touches. RB Ryan Mathews ended up with 17 rushes for 54 yards (3.17 avg), with a best gain of only 10 yards. In change of pace runs, RBs Jackie Battle and Ronnie Brown had marginally better luck, combining for 39 yards on 5 carries (the long was 21 by Battle on 3rd and short). In terms of receptions, it seemed that Tampa Bay's front 7 was keyed on the Chargers RBs - Mathews and Brown combined for only 28 yards on 8 receptions. Mathews is also continuing to make good blitz pickups - he was better than Brown in this game, actually - which means he should be in on 3rd down more... right, Norv?

WR Danario Alexander is simply a better fit for the Chargers' offense than either Robert Meachem or Eddie Royal. He's got Vincent Jackson's speed, and while he's not a burner, he does have a great burst to get separation. Oh, and he runs really well after the catch. Alexander totaled 5 catches for 134 and a TD. WR Malcom Floyd continued his steady, consistent play, bringing in 6 for 63 and a TD. Gates was a monster for the Chargers on their second possession, getting 46 of his 53 yards and a TD. Solid support was provided by WRs Eddie Royal, Meachem and TE Dante Rosario, who combined for 55 yards on 5 receptions.

Tampa Bay's Defensive Line and the Chargers O-Line generally fought to a draw. That said, LT Mike Harris is a liability, especially in the running game. The Chargers tried running behind him 10 times, only collecting 20 yards. Harris also gave up the one true sack, setting up the game-clinching INT. LG Tyronne Green and C Nick Hardwick had some issues handling stunts and zone blitzes on their side of the line, giving up a few quick pressures on Rivers. Green also had a really tough assignment against Bucs DT Gerald McCoy, who blew him up on more than a few occasions and killed some runs to the left. The Chargers had better luck running behind RG Louis Vasquez, and Green for a change did a nice job of pulling into the gap and clearing some running room. RT Jeromey Clary continues his streak of solid play, holding up relatively well in pass and run blocking.

There was solid all-around play from the defensive line, but nothing I'd term as exceptional, with the exception of continued quality play from DE Corey Liuget - playing hurt, no less - who managed to blow up a couple of Doug Martin runs in the backfield. Beyond that, DT Aubrayo Franklin was solid, and DE Vaughn Martin was better than he'd shown previously. On the other rotation, DT Antonio Garay continues trying to play himself into shape, and his productivity was a notch above what he showed against the Chiefs. DEs Cam Thomas and Kendall Reyes had a marginal impact. As a group the DL combined for 7 solo tackles - 5 by Liuget (2 for loss).

Kinda like the D Line, nothing exceptional, just substitute ILB Donald Butler for Corey Liuget and you'll get the idea. Besides Butler, who had another solid all-around game, with 1 sack and 1 tackle for loss, OLB Jarret Johnson had a solid game helping to keep RB Doug Martin contained. Among the OLBs, Melvin Ingram got close a couple of times and that's about it. Shaun Phillips posted 5 solo tackles and nothing from Larry English. At the other inside ILB spot, Takeo Spikes has become a huge liability in pass defense - he was burned by Martin for a 42 yard catch and run. At this point, I'm ready to see ILB Demorrio Williams playing close to full-time.

This game wasn't the epic fail I thought it would be from CB Antoine Cason and Quentin Jammer. With the exception of a 54 yard pass play given up by Jammer to WR Mike Williams, and a 31 yard pass play given up by Cason to WR Vincent Jackson, coverage outside was actually pretty solid. With the exception of some shoddy run tackling early by everyone, including FS Eric Weddle, tackling and run support was enough to keep Martin and Tampa Bay's other receivers in check. As a bonus, SS Atari Bigby wasn't abused in play action nearly as much. However, like the LBs, there were no impact plays, and no turnovers forced.

Corey Lynch, you got picked on. On the "blocked" punt, Lynch made the classic blocker's mistake of blocking the outside man, while turning the inside rusher loose. As a result, Tampa Bay got a cheap 6 points on the recovery and return. Worse, Scifres is hurt on the play - though he continued on gamely. On a Scifres punt in the 3rd quarter, Lynch nearly got pushed into Scifres in the end zone. Scifres himself missed an opportunity to pin Tampa Bay deep in the 1st quarter, with a punt into the end zone that was nearly saved by Darrell Stuckey. As for the coverage units, they were solid as usual, and Novak converted his only opportunity, from 34 yards.

Here's my big gripe, beside the clear evidence that Tampa Bay was targeting Lynch on the corner on punt blocking. The Chargers moved the ball whenever Norv wasn't settling for deep heaves downfield. Whenever the 3 and 5 step pass plays were called, Rivers did a good job setting his feet and getting the ball out on time. Secondly, it was evident in this game that Gates could not be covered by SS Mark Barron, yet the Chargers really didn't attack him after the 2nd possession. This week, we saw even less of the zone running plays that had yielded some success, even as change up plays. Last, whether because of Rivers' mistakes, the O Line's inability to block, the mistakes by Meachem and Royal (or all of the above), sight adjustments appear to be taken out of the offense (see One Big Play below). 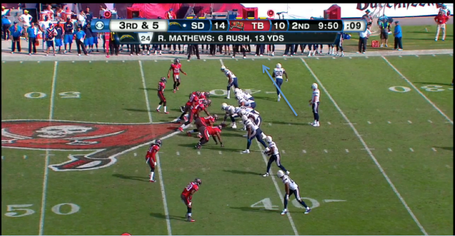 3rd and 5, the Chargers come out in 11 personnel, strong left. Rivers motions Brown out to the right flat. The Bucs are showing a 6 man blitz, with Barron offscreen as the single high safety. At this moment, Gates is uncovered, with Royal and Alexander below him. Floyd is on the right. 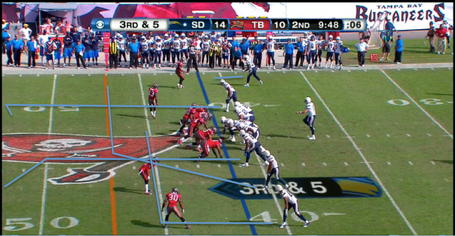 Here's the route combination at the snap, something like a 376 H flat S drag. Normally the outside receiver (Alexander) running a 3 route would go deeper, but this looks like a short 3 because of the blitz. Watch S Ahmad Black - currently in front of Floyd. 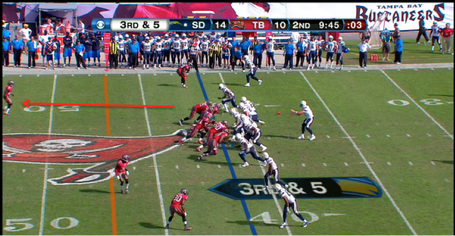 At the snap, it looks like a 6 man rush, Floyd and Gates are totally uncovered at this point. S Brooks bails out, leaving tons of space for a quick pass play. 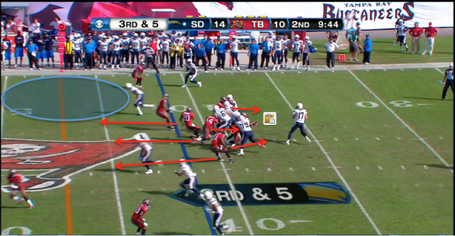 As it turns out, this is a zone blitz, with 3 of the blitzers dropping back into coverage (DEs Da'Quan Bowers and Michael Bennet outside, CB Ronde Barber inside). Look at the space Floyd has, if he breaks off his route towards the sideline. 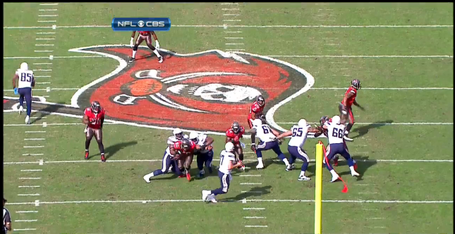 Milliseconds later the left 3/5ths of the O Line is beat. The ball needs to come out now, but neither Gates nor Floyd are turning back toward Rivers nor moving toward open space. My question is... what the hell are Rivers, Gates, and Floyd seeing? Where are the sight adjustments? This could have been a big play, and it should have been a 1st down. Just FYI, the punt block occurs on the next play.

Peyton Manning getting to drive a stake through the Chargers' heart for the first time since, well, ever.