The San Diego Chargers once again took advantage of the mistakes of the Kansas City Chiefs on their way to a blowout victory and a 4-4 record.

The San Diego Chargers are back! Well, they might be. It's entirely possible....heck, it's downright probable, that the Kansas City Chiefs are the worst team to play in the NFL in quite some time. They turned the ball over 4 times, not including a failed onside kick, and did next to nothing to stop the Chargers offense.

The reason that I sometimes worry about the Chiefs defense is simple. Tamba Hali and Justin Houston are very good pass rushers. Yet, for some reason, they disappear when they play the Chargers. There was no pass rush on Philip Rivers at all, leading him to complete 18 of 20 passes for 220 yards and 2 TDs (Don't worry, he still found time to throw a laughably bad interception in the end zone).

Here was his second TD pass to Malcom Floyd: 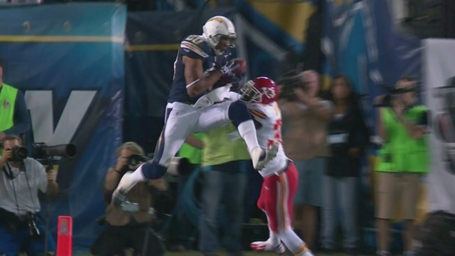 There was nobody there to stop the Chargers running game either, leading to Ryan Mathews, Jackie Battle and Ronnie Brown each finishing with more than 5 yards per carry.

Matt Cassel turned the ball over twice and mixed picture-perfect throws with wildly inaccurate throws that stalled nearly every Chiefs drive. He generally held on to the ball too long, but getting sacked in his own end zone was more the fault of his offensive coordinator (who called a play-action play in an area where you don't do that) than Cassel's. 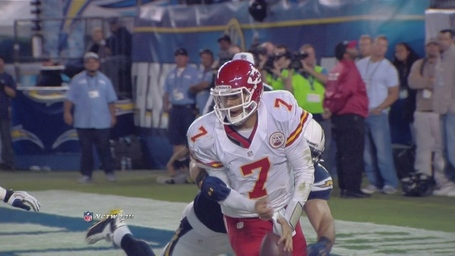 Then there was the hit heard 'round the NFL. Jamaal Charles was trying to get a few extra yards when Donald Butler set his sights on him and left him limping into the locker room with a neck injury. Here's what the moment of impact looked like: 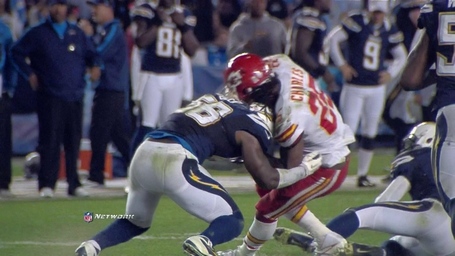 The rest, as they say, is history. Demorrio Williams picked off a pass that Dexter McCluster didn't want to catch (after being laid out by Atari Bigby earlier in the game on a similar pass) and outran a bunch of Chiefs players that didn't want to chase him for another touchdown. The blowout was official and Norv's wacky bunch gets to keep their coach for at least another week for a matchup against the Tampa Bay Buccaneers.

Is this the turning point? Can the Chargers really salvage this season? Could they be in first place in two weeks? Or was this simply the case of the Chiefs being better at giving games away than the Chargers?