The defining trait of the 2012 San Diego Chargers thus far is an inability to put teams away. They've gotten away with it against teams with average-to-awful QB play. Against good-to-great QB play... not such much.

I think here's enough bad teams on the schedule that the Chargers can win 8-9 games this season just by beating up on the NFLs weak sisters. I also think this Chargers team has a chance to be pretty good. They've shown it in stretches this season. But to get where they want to go, or at least for Norv Turner and A.J. Smith to safely enter the faraway enchanted realm of "Job Security," this team has got to start putting teams away when they get the chance.

That way, when referees decide that they want to call games as terribly as they did on Sunday night, the Chargers don't have to worry about it.

On with the grades:

As opposed to the last couple of games, I can't really fault any of Rivers' decisions. There's only one decision he made that I would take back, except that it resulted in a TD pass to WR Robert Meachem. Rivers' overall numbers were quite good, completing 64% of his throws for 354 yards, a second TD to Meachem, and a robust 8.4 yards per pass attempt. His interception was more the product of an uncalled DPI against the Saints defender draped on WR Malcom Floyd. The only black marks against Rivers this week would be his bad underthrow to Meachem early in the 2nd quarter - ultimately resulting in a FG instead of a TD, and 2 killer sacks that ended up pushing the Chargers out of FG range in the 2nd and 3rd quarters before the Ingram Play. The 5th sack and fumble at the end had more to do with LT Jared Gaither's groin injury than anything Rivers did wrong.

Norv, can Ryan Mathews be unbenched now? Because this running game is dangerous when he's on the field, and pacific when he's off the field. Mathews totaled 18 touches for 139 total yards (80 on the ground, 59 through the air), and in a game the Chargers led for most of the 2nd half, it's fair to question why he didn't get the ball more. Behind Mathews, Jackie Battle was sleep-inducing with 10 yards on 4 carries, and 2 catches for 7 yards. Ronnie Brown had another solid game as the 3rd down and change of pace back, with a nice 21-yard draw on the Chargers' 2nd TD drive, and adding 47 yards on 5 receptions. Pass protection was not an issue for the backs.

Overall, a solid game for the receivers. The Chargers finally got some money's worth out of the Meachem signing, to the tune of 3 catches for 67 yards and 2 TDs. Floyd added 5 catches for 108 yards. The disappointment for me is that while he had a pair of nice catches, WR Eddie Royal continues to suck up targets. When your job is to be the slot receiver and get open fast, you need more than 2 receptions off of 5 targets. As for the TEs, Antonio Gates and Dante Rosario combined for 4 catches for 35 yards. In pass protection, TE Randy McMichael gave up a sack after being left 1-on-1 against DE Will Smith, although I'm inclined to think that probably wasn't by design.

Normally, in a game where Rivers is sacked 5 times, I'd be inclined to blame the offensive line a lot more. However, 3 of the 5 sacks were the result of 1) a TE being left on an island, 2) a jailbreak blitz where Rivers held the ball too long, 5) and an injured Gaither unable to do more than walk. 2 of the sacks, however, are attributable to poor play on the right side from RT Jeromey Clary, beaten by Saints DE Junior Galette, and RG Louis Vazquez, who got pushed into Rivers before being sacked by DE Cameron Jordan. More concerning was the number of hits Rivers took, a total of 6. Worse than anything though, was the Saints getting pressure with a 4 man rush in the 4th quarter, even though they couldn't generate any pressure without blitzing for the 1st 3 quarters. Generally solid run blocking saves this group from a worse fate.

Corey Liuget was freaking awesome. When he was on the field, he was a 1 man wrecking crew, notching 2 tackles, 1 sack, 1 TFL and 2 passes defensed (One of these saved a late TD pass to Saints RB Darren Sproles). He consistently drew double-teams the entire game, freeing the LBs behind him to make plays in the running game. DT Aubrayo Franklin was also solid in the middle, while we also got our 1st Kendall Reyes sighting in a while - getting some decent push, notching some pressure and 2 hits on Saints QB Drew Brees. Of the group, DE Vaughn Martin was the only one not to make an impact of any kind.

This grade could have been much higher, except for that play (we'll get there in a moment). OLB Shaun Phillips had a nice game, tallying a sack, a TFL, and a hit on Brees. Likewise, ILBs Donald Butler and Takeo Spikes did a solid job cleaning up in the running game, and also helped control Sproles on the short routes. Butler also got in Brees' throwing lane on the INT (the one that counted), possibly affecting the bad throw. On the other side, OLB Jarret Johnson continues to do the dirty work in the run game, and doing it well. My biggest question relates to OLB Antwan Barnes... as in where the hell is he? 2 QB hits, and nothing in the way of impact. As a group, the LBs combined for 16 tackles.

This brings us to OLB Melvin Ingram, who has to learn very quickly that you cannot hit QBs in the NFL anywhere other than the numbers. You could even argue that by simply pressuring Brees into the INT, he'd done his job, made the game clinching play, and the hit was totally unnecessary. I love Ingram's hustle, but this is the 2nd time a late hit has given 2nd life to an otherwise beaten opponent (the Raiders were the 1st) - and this time it cost the Chargers a game they almost certainly would have won otherwise.

This really comes down to a few key points. TE Jimmy Graham was hurt. WR Lance Moore was out. The LBs kept Sproles under wraps. All you had to do was 1) not get beat deep by WR Devery Henderson, and 2) keep WR Marques Colston under wraps in the red zone. Epic Freaking Fail, unredeemed by CB Quentin Jammer not dropping a tip drill INT. These 2 receivers, plus Chargers practice squad castoff Greg Camarillo combined for 298 yards on 21 receptions. The Saints amazingly took an almost an entire quarter to figure out that Jammer can't cover fast guys anymore, and that CB Antoine Cason can't cover big WRs (remember Plaxico Burress?) at all. Once the Saints figured this out, and the Chargers stopped blitzing late, Brees had a field day. This wasn't even a strong game for the Safeties, who should have been free to help with Graham injured and Sproles under wraps. The only one of them to do anything decent was FS Eric Weddle, who had 7 tackles and 1 sack of Brees, but even Weddle was late with help on 2 of Colston TDs. And, what the hell happened to SS Atari Bigby? Crickets? Really, just terrible all-around play.

KR Richard Goodman had a couple of nice returns, and a couple of returns where he should have taken a knee. As as been the case all season thus far, Royal has not had an impact on punt returns. Coverage-wise, the teams did a solid job keeping Sproles bottled up on punt and kick returns (Sproles has been overrated as a returner going back to his Chargers days). PK Nick Novak had 1 FG of 20 yards, and a miss from 55. The best day belonged to P Mike Scifres, who dropped 3 of his 4 punts inside the Saints' 20, with no touchbacks.

Many successful head coaches are so - not because they're great strategists, or game managers, but simply because they don't hurt their team. Norv Turner's "non-benching benching" of Mathews' crossed the line from sending the player a message to hurting the team on Sunday night. It was evident from the moment he was on the field that the Saints had no answer, and yet, he touched the ball 9 times in the second half, which the Chargers led for about 21 out of 30 minutes.

Secondly, does anyone in this organization have a memory of what happened with Kris Dielman last season? How, with this history, with a coach (Steve Fairchild) hired specifically to help Norv on game days, and with a timeout remaining, can NONE of the coaches see that Gaither is injured and unable to continue - effectively aborting their comeback attempt?

Third, attempting a 55-yard FG anytime other than the end of a half is outright stupid, unless your kicker was Morten Andersen, or is currently Sebastian Janikowski. It's even more stupid when you're trailing 14-10 on the road against a good QB. If you're going to take a gamble, why not attempt an onside kick following the 1st score and kickoff from midfield? The most likely bad outcome is a Saints 1st down at their own 40 yard line.

The lone bright spot was John Pagano's game plan on defense, which was aggressive, and unpredictable, and (minus one big mistake and one circus catch) really effective in keeping the Saints offense chilled for the 1st 40 minutes of the game (I especially liked the 1-4-6 look he showed in the 3rd quarter). The truth is, right until the penalty was called against Ingram, the Chargers defense was in control. Afterwards, the play-calling got as tentative as every defender excepting Liuget, and Brees took full advantage.

If Norv wants to reach the postseason, and by extension a 7th season in San Diego, these kinds of boneheaded mistakes simply cannot continue.

Author's Note: I'm not even addressing the Ingram late hit on Brees, as it's been covered above, and because you can define everything in this game as either Before Ingram's Goof (BIG) or Post Ingram Goof (PIG). It's too clearly a defining play to really fit in this section. 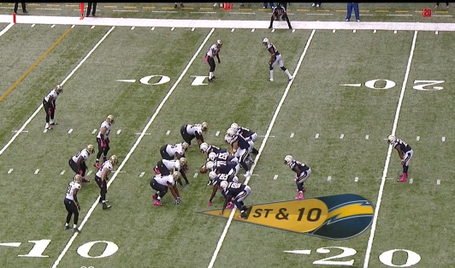 1st and 10 at the Saints' 13. The Chargers line up in a 22 formation, strong left. The Saints have countered with 8 in the box. 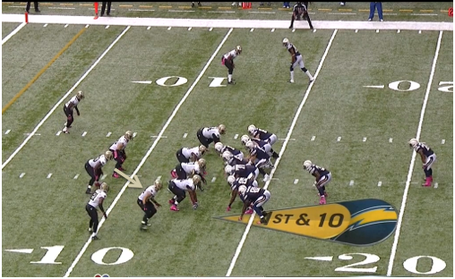 At the snap, Saints OLB Will Herring crashes down and out, anticipating the run left. 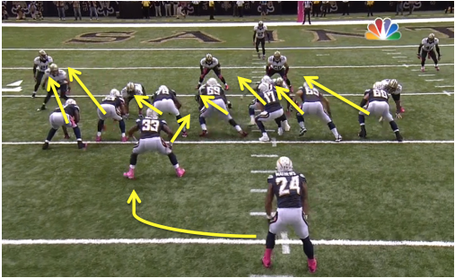 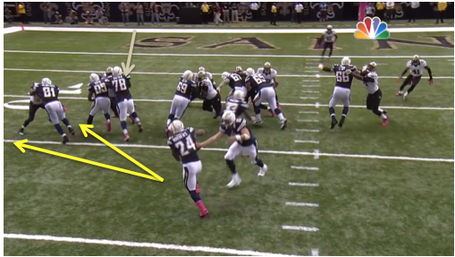 Because Robinson has misread the play, he's picked up by Gaither - thus invisible. Mathews has to simply read the block by TE Randy McMichael. 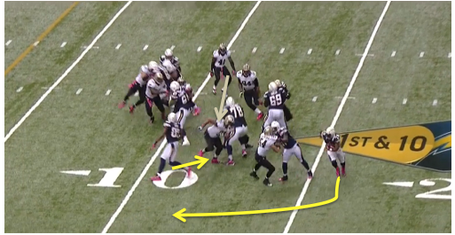 Mathews reads the block and takes it outside. Note that Robinson has run so far inside, that even when he turns around, Gates will have him sealed off.

This is why Mathews has to be on the field. This is likely not a TD run with any other back on the Chargers' roster, as 2 defenders have the angle. But, with Mathews... 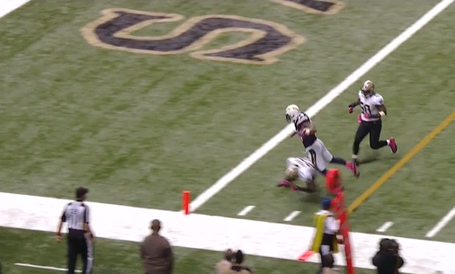 Monday night against Denver, for 1st place in October. Because we own Peyton Manning, right? Because that means that we don't have to worry about Demariyus Thomas, Eric Decker, and Brandon Stokley, right? Because we can block Elvis Dumervil and Von Miller with Jeromey Clary and a gimpy Jared Gaither, right? Because there's no way Norv Tuner will get out coordinated by Jack Del Rio, right? Because we're the home team in a nationally televised game and the refs will be on our side, right?