Many people seem to be on board with firing Norv Turner midseason. Are you one of them?

With each subsequent loss, the #FireNorv contingency is growing louder and louder, and even bigger and bigger. More and more people want Norv fired right now. But here's the thing, teams that fire their head coaches mid-season are already lost causes.

Are the Chargers a lost cause?

I'm not convinced they are at that point yet. Do I have much faith in Norv? Not really. But by firing the coach midseason sends a message of, "we give up." If the team were to extend this losing streak to another 2 or 3 games, then I'll probably hop on that bandwagon and wield a pitchfork and torch along with the rest of you.

In the meantime, the team still has Norv Turner at the helm. And as such, we can still judge him on his job performance. You know the drill: use any criteria you see fit to use, but whatever you do, VOTE and/or comment below! 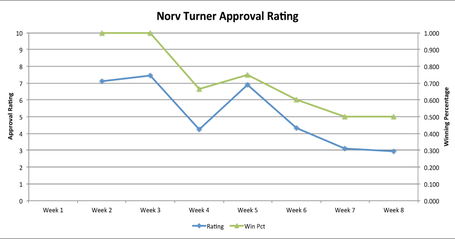