Much like last season, the Chargers seem to be in a mid-season slide. Does the team have enough talent to get out of it? Sound off in our A.J. Smith Approval Poll.

I'd say I was disappointed in the teams performance on Sunday morning, but that would have required me to not have been bored by the game. Any game that ends 7-6 is bound to be a boring game. We got to see the equivalent of a Pitchers' Duel in Cleveland, and really, those aren't all that exciting.

Sunday's game was a comedy of errors in all three phases of the game. Ryan Mathews and Robert Meachem didn't want the ball. Jeromy Clary — who has no business ever touching a football — did want the ball. The Chargers defense couldn't recover fumbles for the life of them. Hell, even Eric Weddle fumbled a punt! Could all of that be blamed on the weather conditions making for a slippery ball and field? Who knows?

There are some around here who believe A.J. Smith's time has come and he should be shown the door along with Norv Turner. Some of us don't necessarily agree with that sentiment. I'm not going to try and sway you one way or another, but we'd like to hear your opinions.

Is it time for A.J. Smith to be shown the door? Should we take a wait-and-see approach and see how the team reacts to the rest of the season? Is he doing well enough that he gets to stay. Vote in the poll below and let us know your thoughts in the comments. 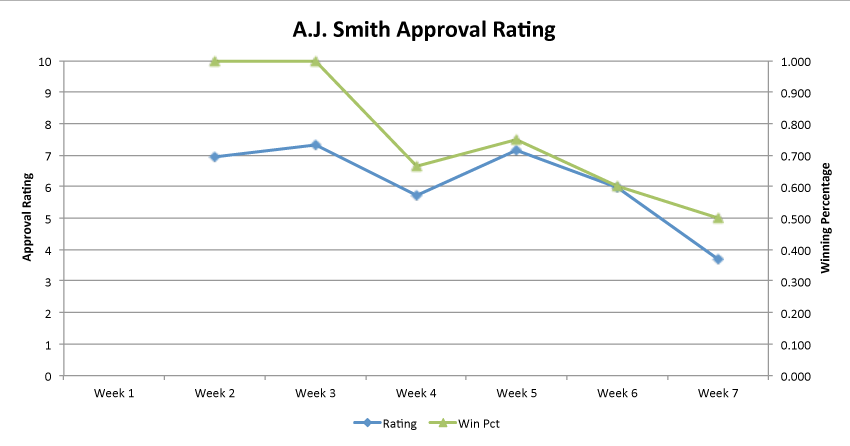