The Chargers certainly took a big step following the disaster versus Denver and the buffoonery of the Bye Week. Unfortunately, it was a step off the cliff - without a parachute.

After 7 games, it seems pretty clear that the Chargers are one of the 10 worst teams in the NFL. Going into this game against the Cleveland Browns, the Chargers at least had beaten the teams they were supposed to beat, and only been defeated by teams with top-shelf QB play.

The Cleveland Browns have been one of the most futile NFL franchises over the past 15 years. They are a team featuring a 29 year old rookie QB, a lame-duck coaching staff, a defensive line missing 2 starters, and a banged up rookie running back. A team that is, excepting CB Joe Haden, LT Joe Thomas, and KR Josh Cribbs, bereft of playmakers.

And yet, this team beat the Chargers. How? By following the exact same "How Bad Teams Beat Other Bad Teams" script the Chargers used to beat the Raiders, Titans, and Chiefs - avoid turnovers, and get out of the opponent's way.

On with the grades... and some alcohol.

Normally, I'd be inclined to give a QB the benefit of the doubt when it comes to not turning the ball over, but that would obscure the fact Philip Rivers didn't make a single play of consequence on Sunday. Yes, the O-Line stunk again. Yes, the receivers were terrible... but he still only completed 52.9% of his passes, for a paltry 154 yards and a miserable 4.5 YPA. Plus, there was the now usual assortment of back-foot throws into double-coverage, 2 of which very easily could have been intercepted. There was forcing the ball to WR Malcom Floyd, because he's the only one who doesn't suck right now.

Right now, with Rivers, I keep thinking that he's become like Brooks Hatlen in The Shawshank Redemption: "no bug, just... institutionalized" as Red might say.

Ryan Mathews, even with a(nother) fumble, still managed a decent 95 yards on 24 carries, a shade under 4.0 YPC. However, if I had to pick 1 offensive player to praise, that player would be Ronnie Brown, who was pretty good. Brown collected 85 yards on 7 receptions, and was a solid change of pace option running the ball, running 4 times for 17 yards. Otherwise, Jackie Battle and LeRon McClain accounted for 11 yards on 5 carries combined. Of course, Mathews was nowhere to be found in the last 2 minutes of either half, and was not on the field for an early 4th and 1.

Really. Out of Rivers 18 completions, exactly 8 of them went to players that were not in the backfield on the completion, out of a total of 20 targets. Of those 8, Floyd came down with 4, for 43 yards. The other 4 were split evenly between TEs Antonio Gates and Dante Rosario, who combined for 25 yards. That's it. 8 catches for 68 yards. Then, you have WR Robert Meachem's utter inability to make any play of consequence, whether it's a sideline toe tap or holding on to an all-but-guaranteed 51 yard TD pass. It's bad enough that Rivers is making mistakes, forcing balls and missing open receivers, but the lack of playmaking on the outside is an equally serious issue.

Here's the complicating factor with RT Jeromey Clary. He actually had a solid run-blocking game, and was the only part of the line to really get any traction in run blocking, with runs behind him gaining 44 yards on 10 attempts. Otherwise, this group was not great. 24 Rushes behind everyone else gained a total of 73 yards. Compounding the issues is that no one had a good day in pass protection. It's true that Rivers only was sacked once, and that was a coverage sack coming from DT Billy Winn. Beyond that, however, there were numerous instances where Rivers was pressured when Gs Tyronne Green and Louis Vasquez allowed pressures off of stunts. Clary struggled, as usual with an edge rusher, playing opposite DE Jabaal Sheard. Even LT Jared Gaither wasn't clean in this game, allowing some pressure off the edge. It's also becoming evident that C Nick Hardwick is really not capable of playing on an island, or providing more than adequate help.

After the 1st drive, where Browns RB Trent Richardson ran wild, the Chargers front did a nice job of clogging the running lanes. The best game from this group, by far, came from DE Corey Liuget, who is really starting to look the part of a 1st round draft choice. Liuget crushed Browns' QB Brandon Weeden on a sack, and added 4 tackles. Beyond Liuget, there wasn't much of anything worth writing home about, although it's worth noting that DT Vaughn Martin struggled a bit in this game, especially when caught as one of the 2 down linemen when the Chargers were in a 2-4-5 look. As a group beyond Liuget, there was a total of 5 tackles. DT Cam Thomas had a nice play to help ILB Donald Butler make a nice stop on a 3rd and 1 run play, and DT Aubrayo Franklin continues to be the steal of free-agency for the Chargers with consistently solid run defense.

ILB Donald Butler had a nice game, cleaning up with 11 tackles. After that, the next best play came from OLB Melvin Ingram, who tipped a pass that should have resulted in a pick 6. Beyond that, and a shared sack for Ingram and OLB Shaun Phillips, nothing of real consequence. Notable in this game was the 1st time we've seen a team actively attempt to take advantage of OLB Jarret Johnson in pass protection, who was badly beaten by Browns TE Ben Watson for what should have been a TD. Once again, no impact plays from OLBs Antwan Barnes or Larry English.

This is a hard grade, simply because the pass defense only allowed 129 yards passing on 11 completions. However, the mistakes were killers. CB Quentin Jammer gets flagged again for Defensive Holding at the worst time. SS Atari Bigby has two biggies, one being a non-tackled attempt on Richardson that allowed him to run for the game's only TD, and the aforementioned dropped pick-6, plus several other instances of missed tackles caused by not wrapping up. CB Antoine Cason gives too much cushion to Browns' WRs who don't have the size to victimize him, and CB Marcus Gilchrist is saved from giving up a huge play by the drops. As usual, the bright spot is FS Eric Weddle, who generated some blitz pressure, forced a fumble late in the game, and was involved in 6 tackles.

Really, this was the brightest spot. PK Nick Novak converted 2 FGs of 43 and 31 yards in tougher-than-usual conditions. and Mike Scifres dropped 2 of his 6 punts inside the Clelveland 10 with no touchbacks, although he got away with an almost- drop-kick in the 1st half. Coverage teams were solid, not giving up any big returns to Cleveland KR Josh Cribbs, while the blocking unit didn't do anything to spring Carr, Goodman, or Weddle. Serviceable, not spectacular.

Re-watching this game, it seems very much like Norv doesn't trust the offense at all - not that he has much reason to. That said, this game was another instance where it seems like Norv is intent on plugging square pegs into round holes. It's pretty clear that this O-Line cannot power-run block, nor hold up in pass protection for downfield pass plays in the manner this offense requires. But Norv simply wont call shorter routes for the receivers. He won't call more zone blocking run plays. He wont use the hurry up to take advantage of favorable matchups. That's right everyone, he won't change the system to fit the players, the players simply must execute the calls he makes.

It's almost as if he's making the point that it's the players who suck, not him.

I'm actually rather surprised that John Pagano didn't attack Weeden more often, but it really didn't affect the game in any way. I'm also wondering of Pagano's reluctance to blitz more often is a reflection on his feelings about the secondary's play this season (not counting Weddle).

One last thing... get your best overall player off of Punt Return duties now!

One Big Play (Battle stuffed on 4th and 1) 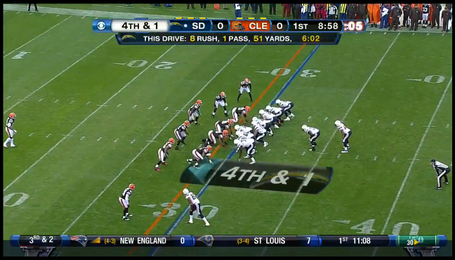 It's 4th and 1 from the Cleveland 30. The Chargers are in 22 personnel, power right. Cleveland has 9 in the box, anticipating run. As I said above, Norv's about execution. Therefore, no motion, misdirection, nothing to make Cleveland guess that this will be anything other than a run to the right side. 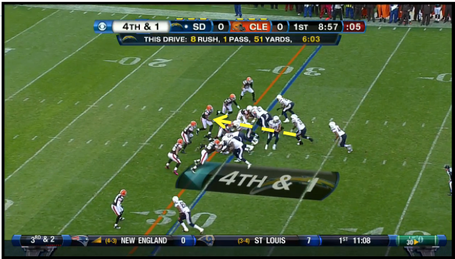 The hole has already opened between Vasquez and Clary, and McClain has a clear path up the middle to block the LB. Notice though that Gates is the only one who's NOT moving yet? 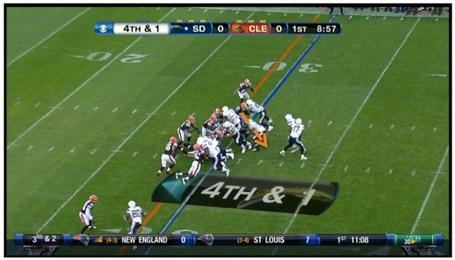 Gates is so slow to get into blocking position that Cleveland S T.J. Ward has already gotten the jump and beaten him to the blocking point. 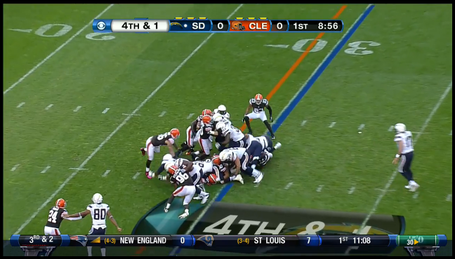 Play over. Battle gets cut down by Ward and never even has a chance to covert the 1st down. Good teams can't (and don't) have these kinds of mistakes from their star players

Pretty much everything. This was worse than bad, it was apathetic, boring, bad football.

Yes, I was one of the defenders of the decision to retain Norv Turner. I even wrote an article defending the decision back in January. At the time, I felt the move was defensible, if certainly and legitimately unpopular. Based on what we've seen this season, that decision was an epic fail.

Now, we have another 3-4 weeks of Fire Norv, Fire A.J. garbage, followed by the inevitable last charge that fools no one except for Dean Spanos.